The magnetic field due to a long straight wire has been derived in terms of µ, i and d. Express this in terms of ε0, c, i and d.

The magnetic field due to a long, straight wire is given by : 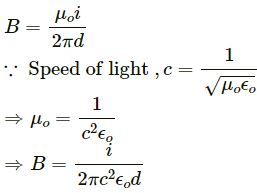 You are facing a circular wire carrying an electric current. The current is clockwise as seen by you. Is the field at the centre coming towards you or going away from you?

According to the right-hand thumb rule :-

In Ampere’s  ∮B¯⋅dl¯ = μ0i, the current outside the curve is not included on the right hand side. Does it mean  that the magnetic field B calculated by using Ampere’s law, gives the contribution of only the currents crossing the area bounded by the curve?
Answer 4 :-

In Ampere’s law ∮B¯⋅dl¯ = μ0i,  ‘i’ is the total current crossing the area bounded by the closed curve.

The magnetic field B on the left-hand side is the resultant field due to all existing currents.

The magnetic field inside a tightly wound, long solenoid is B = µ0 ni. It suggests that the field does not depend on the total length of the solenoid, and hence if we add more loops at the ends of a solenoid the field should not increase. Explain qualitatively why the extra-added loops do not have a considerable effect on the field inside the solenoid.

Answer 5 :-
The magnetic field due to a long solenoid is given as B = µ0ni,
Where, n is the number of loops per unit length.
So, if we add more loops at the ends of the solenoid, there will be an increase in the number of loops and an increase in the length, due to which the ratio n will remain unvaried, thereby leading to not a considerable effect on the field inside the solenoid.

A long, straight wire carries a current. Is Ampere’s law valid for a loop that does not enclose the wire, or that encloses the wire but is not circular?

A straight wire carrying an electric current is placed along the axis of a uniformly charged ring. Will there be a magnetic force on the wire if the ring starts rotating about the wire? If yes, in which direction?

The magnetic force on a wire carrying an electric current i is F‾=i.(l‾×B‾),

Hence, no magnetic force will act on the wire.

Two wires carrying equal currents i each, are placed perpendicular to each other, just avoiding a contact. If one wire is held fixed and the other is free to move under magnetic forces, what kind of motion will result?

The magnetic force on a wire carrying an electric current i is F‾=i.(l‾×B‾) , ​

Where l is the length of the wire and B is the magnetic field acting on it.

Suppose we have one wire in the horizontal direction (fixed) and other wire in the vertical direction (free to move). If the horizontal wire is carrying current from right to left is held fixed perpendicular to the vertical wire, which is free to move, the upper portion of the free wire will tend to move in the left direction and the lower portion of the wire will tend to move in the right direction, according to Fleming’s left hand rule, as the magnetic field acting on the wire due to the fixed wire will point into the plane of paper above the wire and come out of the paper below the horizontal wire and the current will flow in upward direction in the free wire.

Thus, the free wire will tend to become parallel to the fixed wire so as to experience maximum attractive force.

In order to have a current in a long wire, it should be connected to a battery or some such device. Can we obtain the magnetic due to a straight, long wire by using Ampere’s law without mentioning this other part of the circuit?

Quite often, connecting wires carrying currents in opposite directions are twisted together in using electrical appliances. Explain how it avoids unwanted magnetic fields.

Answer 11 :-
Connecting wires carrying currents in opposite directions are twisted together in using electrical appliances.
If the wire is twisted, then the resultant fields from consecutive twists are in opposite directions. So the cumulative effect over a long length of wire is roughly zero.
Let at any point in between the two wires, B1 and B2 be the magnetic field due to wire 1 and wire 2 respectively.

According to the diagram, we can see that the net magnetic field due to first turn is into the paper and due to second twisted turn is out of the plane of paper so these fields will cancel each other. Hence if the wire is twisted, then the resultant fields from consecutive twists are in opposite directions. So the cumulative effect over a long length of wire is roughly zero.

Answer 12 :-
Magnetic field can’t do any work and hence can never speed up or down a particle.
Consider 2 wires carrying current in upward of direction.
Magnetic field due to current in wire 1 produces a magnetic field out of the plane of paper at the position of wire 2.
Due to this magnetic field, a force is exerted on wire 2. Wire 2 electron, moving in downward direction,  move in circular paths due to this magnetic force. As these electrons can not come out of the wire so while describing circular path, they hit the edges of the wire and transfer a momentum to the wire. Due to this change in momentum, wire starts moving and gains kinetic energy.