Which of the following parameters is the same for molecules of all gases at a given temperature?

A gas behaves more closely as an ideal gas at

(a) low pressure and low temperature

(b) low pressure and high temperature

The option (b) low pressure and high temperature is correct
Explanation:

At low pressure, the concentration of gas molecules is very low. Hence, the kinetic assumption that the size of the molecules can be neglected compared to the volume of the container applies.
At high temperature, molecules move very fast. So, they tend to collide elastically and ​forces of interaction between the molecules minimise. This is the required idea condition.

The pressure of an ideal gas is written as P=2E/3V . Here E refers to

The option (a) translational kinetic energy is correct
Explanation:

According to the kinetic theory, molecules show straight line in motion (translational).  So, the kinetic energy is essentially transitional.

Temperature of a gas is directly proportional to its kinetic energy. Thus, energy of an ideal gas depends only on its temperature.

Which of the following gases has maximum hms speed at a given temperature?

The option (a) hydrogen is correct
Explanation:
The has speed of a gas is given by √​3RT/Mo . Since hydrogen has the lowest Mo compared to other molecules, it will have the highest rms speed.

Figure 24-Q1 shows graphs of pressure vs density for an ideal gas at two temperatures T1 and T2. 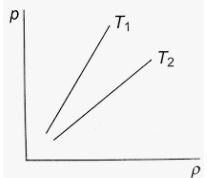 (d) Any of the three is possible.

Root mean squared velocity is given by

Suppose a container is evacuated to leave just one molecule of a gas in it. Let va and vrms represent the average speed and the rms speed of the gas.

Speed is constant and same for a single molecule. Thus, rms speed will be equal to its average speed. 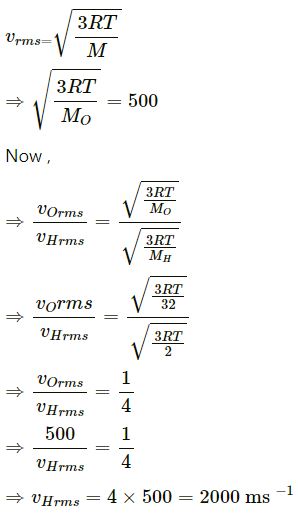 The pressure of a gas kept in an isothermal container is 200 kPa. If half the gas is removed from it, the pressure will be

The option (a) 100 kPa is correct
Explanation:

Let the number of moles in the gas be n.
Applying equation of state, we get 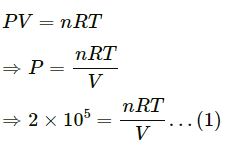 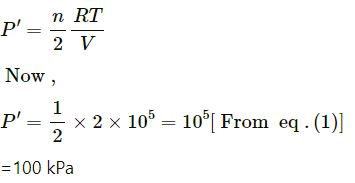 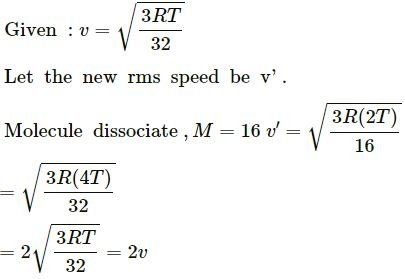 (b) kinetic energy of the gas

(c) number of moles of the gas

(d) number of molecules in the gas.

The option (d) number of molecules in the gas. is correct
Explanation:

The process on an ideal gas, shown in figure, is

(d) none of these

According to the graph, P is directly proportional to T.
Applying the equation of state, we get
PV = nRT

There is some liquid in a closed bottle. The amount of liquid is continuously decreasing. The vapour in the remaining part

(a) must be saturated

(b) must be unsaturated

(c) may be saturated

(d) there will be no vapour.

The option (b) must be unsaturated is correct
Explanation:

As the liquid is decreasing, the liquid is vaporised. We know that vaporisation cannot occur in saturated air and there cannot be any liquid with no vapour at all. So, the vapour in the remaining part is unsaturated.

There is some liquid in a closed bottle. The amount of liquid remains constant as time passes. The vapour in the remaining part

(a) must be saturated

(b) must be unsaturated

(c) may be unsaturated

(d) there will be no vapour.

The option (a) must be saturated is correct
Explanation:

Vapour is injected at a uniform rate in a closed vessel which was initially evacuated. The pressure in the vessel

(c) first increases and then decreases

The option (d) first increases and then becomes constant. is correct
Explanation:

A vessel A has volume V and a vessel B has volume 2V. Both contain some water which has a constant volume. The pressure in the space above water is pa for vessel A and pbfor vessel B.

The option (a) pa = pb is correct
Explanation: