Magnetic force becomes zero as the particle is at rest in this frame of reference and we know that force on a particle,

Can a charged particle be accelerated by a magnetic field? Can its speed be increased?

Will a current loop placed in a magnetic field always experience a zero force?

Answer 4 :-
As the electrons are in motion, there is a magnetic force acting on them individually. But the current through the wire  represents the collective motion of all the electrons that are moving or vibrating very randomly; so, overall effect is negligible. Hence there is no net magnetic force on the wire.
Also, F = LLB sin (θ)
So, if the current in the wire is zero, then the force experienced by the wire will also be zero.

Assume that the magnetic field is uniform in a cubical region and zero outside. Can you project a charged particle from outside into the field, so that the particle describes a complete circle in the field? 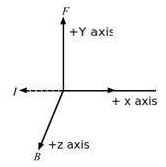 Is it possible for a current loop to stay without rotating in a uniform magnetic field? If yes, what should be the orientation of the loop?

The net charge in a current-carrying wire is zero. Then, why does a magnetic field exert a force on it?

The net charge in a current- carrying wire is zero. Yet, negative charge, i.e. electrons are moving in the wire towards the positive terminal. It is this motion of electrons in the conductor which produces the current in the wire and is also responsible for the magnetic force acting on the wire.

F = qV B sin(θ), where F is the force, q is the charge of electrons, V is the velocity of electrons and B is the magnetic field.

Moreover, the positive charges on the wire are due to nucleus containing proton. As they are not moving so there is no force on them, so the force is only due to the moving electrons in the wire.

The torque on a current loop is zero if the angle between the positive normal and the magnetic field is either θ = 0 or θ = 180°. In which of the two orientations, the equilibrium is stable?

If the angle between the positive normal and the magnetic field is 0, then the equilibrium is stable. It follows directly from the fact that U = – mB cos θ  where m is the magnetic moment. So, when θ is 0, Potential energy, i.e. U of the system is negative, the system is more stable. But if θ is 180°, U is positive or the system is unstable.

Stability of a system depends on its energy and every system tries to minimise its energy.

Verify that the units weber and volt second are the same.

Thus, the units weber and volt second are same.