What is a lodestone?

Lodestone is an ore of iron oxide (Fe3O4). This ore attracts small pieces of iron and it sets itself along a definite direction when it is suspended freely. It is a natural magnet which was used for the navigation by the mariners.

(i) They are irregular and odd shaped.

(ii) They are not magnetically very strong.

How will you test whether a given rod is made of iron or copper?

[Hint : Iron rod gets magnetised when placed near a bar magnet by magnetic induction, while copper rod does not get magnetised]

Iron rod is magnetized when placed near a bar magnet by magnetic induction, while copper rod is not magnetized.

You are provided with two similar bars, one is a magnet and the other is a soft iron. How will you distinguish between them without the use of any other magnet or bar?

[Hint : A magnet when suspended freely will rest only in the north-south direction, but the soft iron bar will rest in any direction]

A magnet when suspended freely will rest only in north-south direction, but the soft iron bar will rest in any direction.

Fill in the blanks to complete the sentences:

A small magnet is suspended by a silk thread from a rigid support such that the magnet can freely swing. How will it rest? Draw a diagram to show it.

If a small magnet is suspended by a silk thread such that it can swing freely then it rests itself in the geographic north-south direction. 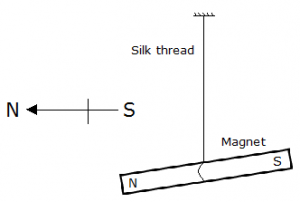 Explain the meaning of the term induced magnetism.

The magnetism acquired by a magnetic material when it is kept near (or in contact with) a magnet, is called induced magnetism.

Explain what you understand by magnetic induction. What role does it play in attraction of a piece of iron by a magnet?

The process in which a piece of magnetic material acquires the magnetic properties temporarily in presence of another magnet near it is called the magnetic induction.

Explain the mechanism of attraction of iron nails by a magnet when brought near them.

When iron nails are brought near one end of a magnet, the nearer end of piece acquires an opposite polarity by magnetic induction. Since unlike poles attract each other, therefore, iron nails are attracted towards the end of the magnet. Thus, the iron nail first becomes a magnet by induction and then it is attracted.

(a) When two pins are hung by their heads from the same pole of a magnet, their pointed ends moves apart.

(b) Several soft iron pins can cling, one below the other, from the pole of a magnet.

(c) The north end of a freely suspended magnetic needle gets attracted towards a piece of soft iron placed a little distance away from the needle.

(a) When two pins are hung by their heads from the same pole of a magnet, they acquire same polarity. Because like poles repel each other, their pointed ends move apart.

(b) Several soft iron pins can cling one below the other from the pole of a magnet because the magnet induces magnetism in an iron nail which gets attracted by the magnet and clings to it. This magnetized nail magnetizes the other nail near it by magnetic induction and attracts it. This process continues until force of attraction on first nail is sufficient to balance the total weight of all nails in chain.

A small iron bar is kept near the north pole of a bar magnet. How does the iron bar acquire magnetism? Draw a diagram to show the polarity on the iron bar. What will happen if the magnet is removed?

The iron bar acquires magnetism due to magnetic induction.

If the magnet is removed, the iron bar loses its magnetism.

Induced magnetism is temporary as it lasts as long as the magnet causing induction remains in it vicinity.

When a piece of magnetic material is brought near a magnet, it first becomes a magnet by induction and then it is attraction. Thus, we say that induction precedes attraction.

What do you understand by the term magnetic field lines?

Explain why iron filings which are sprinkled on a sheet of cardboard over a bar magnet take up a definite pattern when cardboard is slightly tapped.

The iron filings take up a definite pattern (curved lines). This happens because each piece of iron filing becomes a magnet to the magnetic induction of the magnet. It thus experiences a force in the direction of magnetic field of the bar magnet at that point and aligns itself along curved lines.

Explain the method of plotting the magnetic field lines by using a small compass needle.

Fix a sheet of paper on a drawing board by means of board pins. Place a small compass needle at position 1 as shown in fig (a) and looking from the top of the needle, mark two pencil dots exactly at two ends of the needle. Then move the compass needle to position 2 in such a way that one end of needle coincides with the second pencil dot. Repeat the process of moving the compass needle to positions 3, 4,… to obtain several dots. On joining the different dots, you will get a straight line. Thus one line of magnetic field of earth is traced. 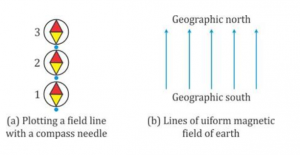 This process is repeated starting from a different point and tracing out another line of magnetic field. In this manner, several lines of magnetic field can be drawn. Each line should be labeled with an arrow from the south pole of the needle towards the north pole to indicate the direction of the magnetic field. Fig (b) shows several magnetic lines so obtained.

Can two magnetic field lines intersect each other? Give reason to your answer.

No two magnetic field lines can intersect each other. If they do, there would be two directions of the field at that point which is not possible.

In (a) The North Pole of two magnets is facing each other. So, the field lines will be

In (b) The North Pole of one magnet is facing the South Pole of the other. So, the field lines will be

State two evidences of the existence of earth’s magnetic field.

(ii) Neutral points are obtained on plotting the field lines of a magnet. 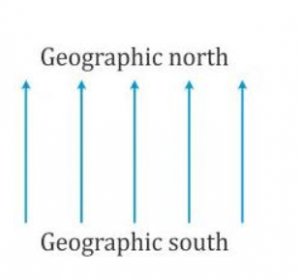 (a) Draw the pattern of magnetic field lines near a bar magnet placed with its North Pole pointing towards the geographic North. Indicate the position of neutral points by marking X. 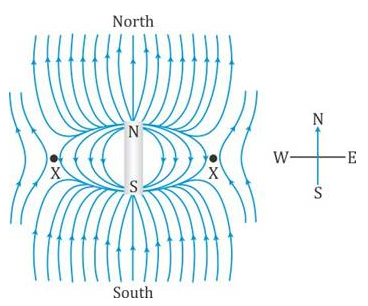 (b) The magnetic field lines are non-uniform in nature.

Fig.10.13  shows a bar magnet placed on the table top with its north pole pointing towards south. The arrow shows the north-south direction. There are no other magnets or magnetic materials nearby.

arrow head to show the direction of each field line.

(b) Indicate by crosses, the likely positions of the neutral points. 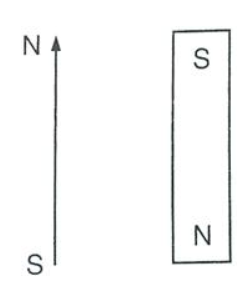 (c) What is the magnitude of the magnetic field at each neutral point?

Give a reason for your answer. (c) Magnitude of magnetic field at neutral points is zero. It is so because at these points, the magnetic field of the magnet is equal in magnitude to the earth’s horizontal magnetic field, but it is in opposite direction. Hence, they cancel each other.

What conclusion is drawn regarding the magnetic field at a point if a compass needle at that point rests in any direction? Give reason for your answer.

Since the net magnetic field is zero at neutral points, the compass needle remains unaffected (i.e. it comes to rest pointing in any direction) at these points and hence, they can be detected.

(i) Neutral points will be in east-west direction.

(c) The neutral points of a bar magnet kept with its north pole pointing towards geographic north are located ____________.

(a) Repel each other

(b) Attract each other

(c) First attract each other, then repel

(d) Neither attract nor repel.

In a uniform magnetic field, the field lines are:

(d) Nothing can be said.

What is an electromagnet?

An electromagnet is a temporary strong magnet made from a piece of soft iron when current flows in the coil wound around it. It is an artificial magnet.

Name the material used for preparing an electromagnet.

The material used for preparing an electromagnet is soft iron.

An electromagnet is made by winding an insulated copper wire around a soft iron core either in the shape of a solenoid or U-shape.

The strength of magnetic field of an electromagnet depends on:

You are required to make an electromagnet from a soft iron bar by using a cell, an insulated coil of copper wire and a switch.

(a) Draw a circuit diagram to represent the process.

(b) Label the poles of the electromagnet. Following Figure 10.18  shows a coil wound around a soft iron bar XY. (a) State the polarity at the ends X and Y as the switch is pressed. (b) Suggest one way of increasing the strength of electromagnet so formed. 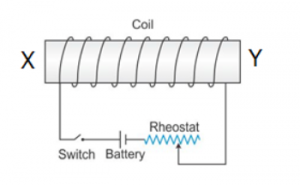 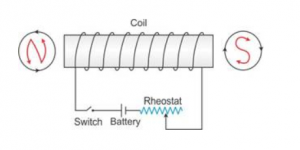 The polarity at X is North and at Y is South.

By increasing the number of turns of winding in the solenoid, the strength of the electromagnet can be increased.

A coil of insulated copper wire is wound around a piece of soft iron and current is passed in the coil from a battery. What name is given to the device so obtained? Give one use of the device mentioned by you.

The device formed is an electromagnet.

For separating the magnetic substances such as iron from other debris.

Show with the aid of a diagram how a wire is wound on a U-shaped piece of soft iron in order to make it an electromagnet. Complete the circuit diagram and label the poles of the electromagnet. 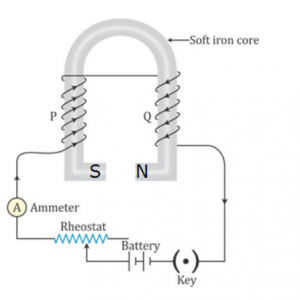 State two ways through which the strength of an electromagnet can be increased.

The strength of an electromagnet can be increased by following ways:

Name one device that uses an electromagnet.

The electromagnet is used in an electric relay.

State two advantages of an electromagnet over a permanent magnet.

State two differences between an electromagnet and a permanent magnet.

Why is soft iron used as the core of the electromagnet in an electric bell?

How is the working of an electric bell affected, if alternating current be used instead of direct current?

Name the material used for making the armature of an electric bell. Give a reason for your answer.

The material used for making the armature of an electric bell is soft iron which can induce magnetism rapidly.

Electromagnets are made up of:

Electromagnets are made up of soft iron.

The strength of the electromagnet can be increased by

(a) reversing the directions of current

(c) increasing the current in the coil

(d) decreasing the number of turns of coil

(c) Increasing the current through the coil.