If a constant potential difference is applied across a bulb, the current slightly decreases as time passes and then becomes constant. Explain.

Two unequal resistances, R1 and R2, are connected across two identical batteries of emf ε and internal resistance r (see the figure). Can the thermal energies developed in R1 and R2 be equal in a given time? If yes, what will be the condition?

For the given time t, let the currents passing through the resistance R1 and R2 be i1 and i2, respectively.

Applying Kirchhoff’s Voltage Law to circuit-1, we get:-

Similarly, the current in the other circuit,

The thermal energies through the resistances are given by 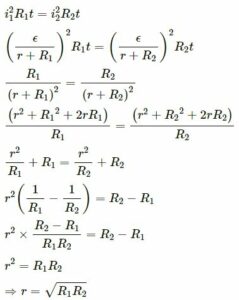 When a current passes through a resistor, its temperature increases. Is it an adiabatic process?

Apply the first law of thermodynamics to a resistor carrying a current i. Identify which of the quantities ∆Q, ∆U and ∆W are zero, positive and negative.

Do all thermocouples have a neutral temperature?

Is inversion temperature always double the neutral temperature? Does the unit of temperature have an effect in deciding this question?

Is neutral temperature always the arithmetic mean of the inversion temperature and the temperature of the cold junction? Does the unit of temperature have an effect in deciding this question?

Do the electrodes in an electrolytic cell have fixed polarity like a battery?