Note:– Before viewing Solutions of Ammonia by Dr Viraf and J Dalal Simplified ICSE Chemistry Solutions .Read the Ammonia Carefully to understand the concept in better way .After reading the Ammonia solve all example of your text book with ICSE Specimen Sample Paper for Class-10 Exam of Council. Ammonia is the Most important Chapter in ICSE Class 10 Chemistry.Previous Year Solved Question Paper for ICSE Board

State why nitrogenous matter produces ammonia. State a liquid source of ammonia.
Answer:
When nitrogenous matter (such as animal and vegetable protiens) decays in the absence of air, the putrefying bacteria on the organic matter in the soil or ammonifying bacteria in organic matter produces ammonia.
The liquid souce of ammonia is decaying urine of animals.

State why ammonia is not obtained in the laboratory from NH4NO3 and NaOH.
Answer:
Ammonium nitrate on heating decomposes explosively with the formation of nitrous oxide and water. Give a balanced equation with all conditions to obtain NH3 from N2 and H2.
Answer:

Conditions for maximum yield of ammonia :

State two physical properties of NH3 which enable separation of NH3 from a mixture of NH3, N2 and H2.
Answer: Give an equation for the burning of ammonia in oxygen. State the observation seen.
Answer:
Ammonia bums in the atmosphere of oxygen with a pale blue flame, forming nitrogen gas and water vapour.

Convert ammonia to nitric oxide by catalytic oxidation of ammonia. State all conditions.
Answer:
When a mixture of 2 (vols.) of oxygen and l(vols.) of ammonia is passed over platinum gauze maintained at 800°C, it reacts to form nitric oxide and water vapour.

Draw a simple diagram for the catalytic oxidation of ammonia in the laboratory.
Answer: 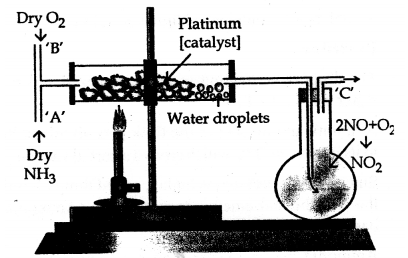 State what an aqueous solution of NH3 is called. State how it is prepared giving reasons.

Answer:
The aqueous solution of ammonia is chemically ammonium hydroxide(NH4OH) (Liquor Ammonia).
It is prepared by connecting the delivery tube of the apparatus generating ammonia with an inverted funnel whose rim is just dipping in water contained in beaker.
This arrangement provides

The presence of OH– turns the red litmus blue.

Convert (i) ammonia (ii) ammonium hydroxide to an ammonium salt using (a) HNO3 (b) H2SO4.
Answer:

Hence, the reaction between liquor ammonia and nitric acid is a neutralisation reaction.

State why an aqueous solution of ammonia (NH4OH) is used for identifying cations.
Answer:
Because of its colour and solubility in excess NH4OH.

State how NH4OH is used for identify :

Give also a balanced equation in each case for a known example.
Answer: 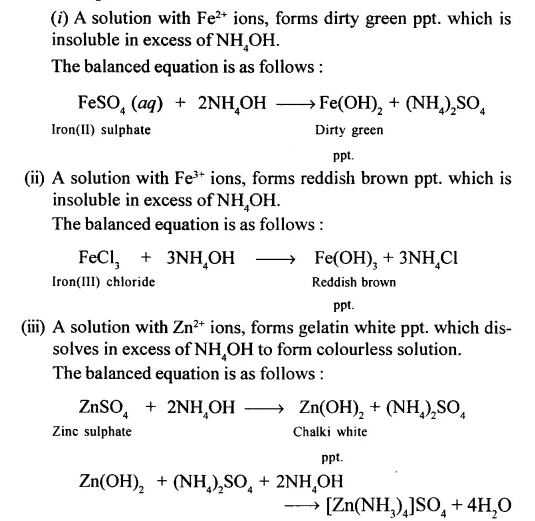 State why the blue ppt. formed on addition of NH4OH to CuSO4 soln. dissolves to give a deep blue solution with excess of NH4OH. Give an equation for the reaction. State why Zn(OH)2 is soluble in excess of NH4OH.
Answer:
CuSO4 when reacts with excess of ammonia it produces needle shape crystals of tetraammine copper(II) sulphate complex which possess a beautiful deep blue colour. State (i) a light neutral gas (ii) an acid (iii) an explosive (iv) a fertilizer — obtained from ammonia.
Answer:

Name an ammonium salt which is a constituent of (a) smelling salts (b) dry cells.
Give reasons for the use of the named ammonium salt for the same.
Answer:

(a) Smelling salts : Ammonium carbonate, (NH4)2CO3 is used as smelling salt. It is an unstable white solid decomposes to give pungent smellingNH3 gas.
(NH4)2CO3 → 2NH3 + CO2 + H2O
The pungent smelling NH3 gas revives a fainted person. (NH4)2CO3 is always kept in a tightly closed container to prevent it from decomposition.
(b) Dry cells : Ammonium chloride(NH4Cl) is used in dry cells. It oxidises Zn to Zn2+ ions. The electrons so produced constitute the electric current.

Give one use with reason of

Answer:
(i) Use of an Aqueous solution of Ammonia (NH3) : An aqueous solution of NH3 is called liquor ammonia. Being a base, it can easily emulsify oils and fats. Therefore, it is used for removing oil and fat stains from clothes carpets, upholstery etc. It is also used for cleaning window panes, porcelain articles etc.
(ii) Use of Liqueified Ammonia (NH3) : Liquid ammonia is used as refrigerant i.e. for producing low temperature. This is due to the following reasons:

(a) It is highly volatile.
(b) It can be easily liquefied under high pressure and low temperature.
(c) It’s latent heat of evaporation is very high.

State what are chlorofluorocarbons and give their use. Give a reason why they are ozone depleting. State a suitable alternative to chlorofluorocarbons which are non-ozone depleting.
Answer:
Chlorofluorocarbons (CFC’s) are compounds of carbon with chlorine or fluorine.
CFC are chemicals which like liquefied ammonia gas are used in refrigeration gas. They are also used as coolants in refrigeration and A/c Plants and aerosol sprays and cleansing agents.
These CFC’s deplete ozone layer and also contribute to global warming. Thus these CFC’s are harmful to life. The CFC’s are decomposed by ultraviolet rays coming from sun to produce highly reactive chlorine atoms i.e. free Cl radicals.
Suitable alternatives to chloroflurocarbons which are not depleting ozone are :
HCFC – Hydrochloroflurocarbons; and HFC – 125 Hydrochloroflurocarbons ; which act as a substitute for CFCs, which are non-ozone depleting.