(a) Dalton said that atoms could not be divided
(b) An ion which has a positive charge is called a cation.
(c) The outermost shell of an atom is known as valence shell.
(d) The nucleus of an atom is very hard and dense.
(e) Neutrons are neutral particles having mass equal to that of protons.
(f) Isotopes are the atoms of an element having the same atomic number but a different mass number.

2. Write ‘true’ or ‘false’ for the following statements:

(a) An atom on the whole has a positive charge.
false
(b) The maximum number of electrons in the first shell can be 8.
false
(c) The central pad of the atom is called nucleus.
True.

3. Give the following a suitable word/phrase.

(a) The outermost shell of an atom is known as

(b) The number of valence electrons present in magnesium is

(c) The sub atomic particle with negative charge is

protons in a neutral atom

(a) What are the two main features of Rutherford’s atomic model?
(b) State its one drawback.
Answer:
(a) According to Rutherford’s model an atom consists of:

(b) Rutherford’s atomic model could not explain the stability of the atom as it is like a solar system, the sun is at the centre and the planets revolve

around it, in an atom the electrons revolve around the centrally located nucleus containing protons.

State the mass number, the atomic number, number of neutrons and electronic configuration of the following atoms.Also, draw atomic diagrams for them. 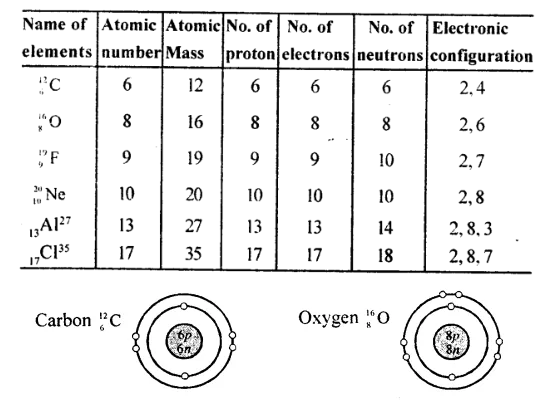 Draw the diagrams representing the atomic structures of the following:
(a) Nitrogen (b) Neon
Answer:

(a) What are the two main parts of which an atom is made of?
(b) Where is the nucleus of an atom situated ?
(c) What are orbits or shells of an atom ?
Answer:
(a)

(b) The nucleus is a centrally located positively charged mass.
(c) The circular orbits (shell present) in the space available around the nucleus on which electrons revolve are called orbits or shells of an atom.

Complete the table below by identifying A, B, C, D, E andF.
Answer: