Bermuda Triangle: Why Everything Disappear Here not only at surface but also from above it , This mystery could not be solved  since many decade. The story of Triangle actually began 56 years ago, in 1964. Let us start this to understand the mystery and scientific reason .

icsehelp began to publish at least one content daily on various GK topics . These topics may be related with Science , Art, Political, Sport,  Economical, Medical Research , Space,  Entertainment and Latest News across globe. The main motto of such content to all round development other than making book worm.

Bermuda Triangle:  Where it is Situated

Located off the southeastern coast of the US in the Atlantic Ocean, between Bermuda, Florida and Puerto Rico, Covering an area of 440,000 miles of sea, 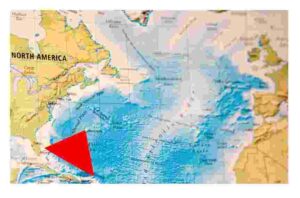 Bermuda Triangle:  Why This Place is Risky

Mysterious behavior of the region came to the public attention only in the 20th century when the Navy cargo ship, USS Cyclops, with more than 300 people on board, went missing in this area.

the plane suddenly disappeared from the radar when it was flying from Puerto Rico to Florida, and the debris from the missing plane was found later

In 1945, five US Navy planes and 14 men disappeared in the area while doing routine training exercises.

The US navy investigated and ultimately reported the incident as “cause unknown”. From the time of this incident until the mid-1980s, 25 small planes disappeared while passing through the Bermuda Triangle. They were never seen again

there are many explanation given over the curious topic not only by scientist but also by expert. main reason and explanation has been given below.

Hexagonal Clouds: A fascinating theory has been proposed by meteorologists claiming that the reason for the mysteries pervading the Bermuda Triangle area are unusual hexagonal clouds creating 170 mph air bombs full of wind. These air pockets cause all the mischief, sinking ships and downing planes

Strong Magnetism Area: Another common explanation for the Bermuda Triangle rests on magnetism. The Earth’s magnetic North Pole isn’t the same as its geographic North Pole, which means that compasses usually don’t point exactly north. Only along what’s known as agonic lines, which line up magnetic and geographic north, are compasses truly accurate

Releasing Methane (CH4): some scientists have suggested that ship sinking’s in the Bermuda Triangle could be due to massive bubbles released from undersea methane deposits. This decrease the density of water and ship sink more and more to maintain balance of ship as Archimedes theory of floatation.

Aliens Protected for Research: The myth explains that UFOs for the disappearances”, and that they “believe that aliens use the Triangle as a portal to travel to and from our planet”. “The area is like a gathering station where they capture people, ships and aircraft to conduct research.”