When a particle moves in a circle with a uniform speed

(a) its velocity and acceleration are both constant

(b) its velocity is constant but the acceleration changes

(c) its acceleration is constant but the velocity changes

(d) its velocity and acceleration both change.

The option (d) its velocity and acceleration both change. is correct

In a circular motion, the direction of particle changes. Therefore, velocity, being a vector quantity, also changes.
As the velocity changes, acceleration also changes.

Tow cars having masses m1 and m2 moves in circles of radii r1 and r2 respectively. If they complete the circle in equal time, the ratio of their angular speed ω1/ω2 is

A car moves at a constant speed on a road as shown in figure. The normal force by the road on the car NA and NB when it is at the points A and B respectively.

Information to decide the relation of NA and NB.

From the figure in the question, it is clear that r B > r A.

A particle of mass m is observed from an inertial frame of reference and is found to move in a circle of radius r with a uniform speed v. The centrifugal force on it is

(a) mv²/r towards the centre

(b) mv²/r away from the centre

(c) mv²/r along the tangent through the particle

The option (d) zero  is correct

The centrifugal force is a pseudo force and can only be observed from the frame of reference, which is non-inertial w.r.t. the particle.

It is given that the turntable is rotating with uniform angular velocity. Let the velocity be  ω . 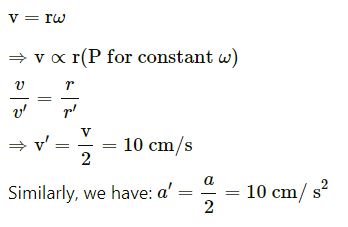 Water in a bucket is whirled in a vertical circle with string attached to it. The water does no fall down even when the bucket is inverted at the top of its path. We conclude that in this position

A stone of mass m tied to a string of length l is rotated in a circle with the other end of the string as the centre. The speed of the stone is v. If the string breaks, the stone will move

(a) towards the centre

(b) away from the centre

(c) along a tangent

The option (c) along a tangent  is correct

Let the force of friction between the coin and the rotating turntable be F.
For the coin to just slip ,

Here,  m ω² r is the centrifugal force acting on the coin.

The option (a) increases  is correct 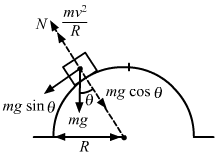 The normal force on the motorcycle , N = mgcos⁡θ−mv²/R

As the motorcycle is ascending on the over bridge, θ decreases (from π/2 to 0).

So, normal force increases with decrease in θ.

Three identical cars A, B and C are moving at the same speed on three bridges. The car A goes on a place bridge, B on a bridge convex upward and C goes on a bridge concave upward. Let FA, FB and FC be the normal forces exerted by the car on the bridges when they are at the middle of bridges.

(a) FA is maximum of the three forces.

(b) FB is maximum of the three forces.

(c) FC is maximum of the three forces.

The option (c) FC is maximum of the three forces.   is correct

At the middle of bridge, normal force can be given as :

(d) the information is insufficient to find the relation between F1 and F2.

Earth rotates about its axis from west to east. 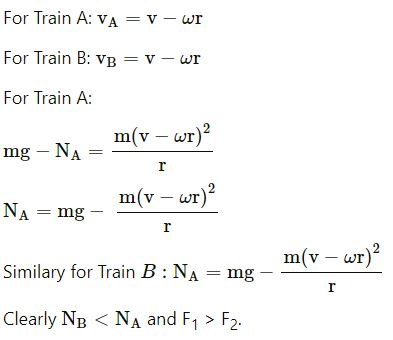 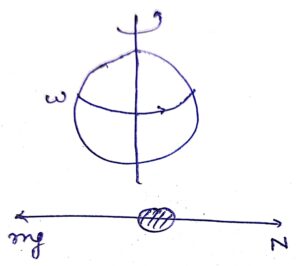 If the earth stop rotating, the apparent value of g on its surface will

(d) increase at some places and remain the same at some other places.

The option (a) increase at some places and remain the same at some other places. is correct

A rod of length L is pivoted at one end and is rotated with a uniform angular velocity in a horizontal plane. Let T1 and T2 be the tensions at the points L/4 and 3L/4 away from the pivoted ends.

(d) The relation between T1 and T2 depends on whether the rod rotates clockwise or anticlockwise. 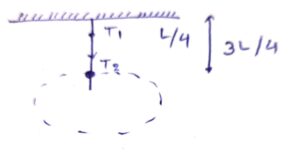 Let the angular velocity of the rod be ω .

Distance of the centre of mass of portion of the rod on the right side of L/4 from the pivoted end :

Mass of the rod on the right side of L/4 from the pivoted end :

Distance of the centre of mass of rod on the right side of 3L/4 from the pivoted end :

Mass of the rod on the right side of L/4 from the pivoted end :

A simple pendulum having a bob of mass m is suspended from the ceiling of a car used in a stunt film shooting. the car moves up along an inclined cliff at a speed v and makes a jump to leave the cliff and lands at some distance. Let R be the maximum height of the car from the top of the cliff. The tension in the string when the car is in air is

The option (d) zero. is correct

When the car is in air, the acceleration of bob and car is same. Hence, the tension in the string will be zero.

Let θ denote the angular displacement of a simple pendulum oscillating in a vertical plane. If the mass of the bob is m, the tension is the string is mg cos θ

(c) at the extreme positions

(d) at the mean position.

The option (c) at the extreme positions. is correct

at the extreme positions

Tension is the string ,

That is, at the extreme positions, the tension is the string is mg cosθ.