Question 1.
Differentiate between the terms elements, compounds and mixtures with suitable examples.
Answer 1:

It is the basic unit of matter, which cannot be broken down into substances by any way but can be combined to form new substances.It is a pure substance.It classifies into metals, non-metals, metalloids and noble gases.

It is a combination of two or more elements.It is a pure substance.Through chemical reactions, they can be broken down into metals.

It is a combination of two or more elements or compounds or both.The substances combined in a mixture are in a particular ratio.

Question 2.
State which element exists in the highest percentage in –

Question 3.
Elements are mainly classified into metals and non-metals. State six properties of metals which differ from non-metals.
Answer 3:

Question 4.
Give the symbols of the following elements – and state in each case whether they are metals, non-metals, metalloids or noble gases.

State what information is provided by the formula of calcium hydroxide – Ca(OH)2
Answer 7:

Question 9.
Write the symbols of the following elements and radicals along with their valencies.

Question 11.
Give the formulas of the following acids:
(a) hydrochloric
(b) nitric
(c) sulphuric
(d) carbonic — acid.
Answer 11:

Question 13.
Explain the term mixture. Differentiate between a homogenous and a heterogeneous mixture with one example of each in the

Substances made up of two or more elements / compounds or both, mixed together in any proportion are called mixtures.

Question 15.
State the correct technique for separation of the following mixtures.
(a)  a sublimable solid and a non-sublimable solid.
(b) a liquid component from soluble impurities in the liquid component.
(c) a lighter liquid from a heavier liquid.
(d) a low boiling point liquid from a high boiling point liquid.
(e) solid constituents in a liquid constituent by adsorption.
Answer 15:

Question 16.
Give –
(a) The principle involved in separation of the mixture
(b) The technique of separation for each of the following mixtures.
(1) Naphthalene and sodium chloride
(2) Common salt from a solution of common salt in water
(3) Pure water from impure water
(4) Kerosene and water
(5) Methyl alcohol and water
(6)Dyes of an ink
Answer 16:
(1) By Sublimation

Principle – The process of conversion of solid directly into gaseous state and back to solid without passing through the liquid state.

Technique – Naphthalene and sodium chloride are heated in a dish and a funnel is kept over it, after some time naphthalene evaporates and turns into vapour which is seen on the walls of the funnel. Sodium chloride is left behind, and the mixture is separated.

Principle – Evaporation is the process of conversion of liquid component to its gaseous state by heating.

Technique – In a salt solution, water evaporates on heating and salt crystals are left behind in the dish.

Principle – The process of separating two liquids by heating and converting into vapour in a distillation flask and its condensation of the vapour back into the liquid.

Technique – the mixture is kept in a distillation flask and the flask is heated. The liquid or the pure water vaporises and the impurities are left behind in the flask.

Principle – The method used to separate two immiscible liquids, out of which one is heavy and the other is light.

Technique – The mixture of kerosene and water is kept in a funnel. The heavier liquid that is water settles down in the funnel and removed by opening the tap at the bottom. The lighter liquid, i.e. kerosene remains in the funnel.

Technique – The mixture of alcohol and water is kept in a distillation flask and heated slowly, the liquid which has a lower boiling point evaporates and collects in the receiver after condensation in the Leibigs condenser,

The fractionating column separates the vapours of other liquid to condense, keeping the two separated.

Principle – It is a method of separating the various components of a mixture by their difference in rate of flow over an absorbent medium.

Technique – Ink spots contain different solid constituents. It is kept on the filter paper. The lower end of filter paper is dipped in the solvent and hung. The solvent flows over the ink spot and the dyes separate out. 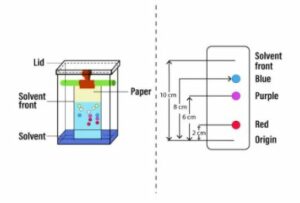 Select the correct answer from the choice in bracket.

Match the ideal method of separation of components in a mixture in List I with the – appropriate process in List II.

Give reasons for the following statements :