Name one D.C. source and one A.C. source.

Distinguish between D.C. and A.C.

What is an electric cell?

An electric cell is a device which converts chemical energy into electrical energy. When connected in a circuit, it acts as a source of D.C. current.

What transformation of energy takes place when current is drawn from a cell?

Name the constituents of a cell.

Constituents of cell: Two electrodes and an electrolyte in a vessel.

State the two kinds of cell. Give one example of each.

What is a primary cell? Name two such cells.

Primary cells are cells which provide current as a result of irreversible chemical current.

What is a secondary cell? Name one such cell.

State three differences between the primary and secondary cells.

What do you understand by the term current? State and define its S.I. unit.

Current is the rate of flow of charge across a cross-section. It is a scalar quantity.

Its S.I. unit is ampere (coulomb per second).

If 1 ampere current flows through a conductor, it means that 6.25 x 1018 electrons pass in 1 second across that cross-section of conductor.

How much is the charge on an electron?

n electrons flow through a cross section of a conductor in time t. If charge on an electron is e, then write an expression for the current in the conductor.

Name the instrument used to control the current in an electric circuit.

A rheostat is used to control current in an electric circuit.

In the electric circuit shown in Fig., label the parts A, B, C, D, E, and F. State the function of each part. Show in the diagram the direction of flow of current.

A: Ammeter – It measures the current flowing through the circuit.

B: Cell – It acts as a source of direct current for the circuit.

C: Key – It is used to put the current on and off in the circuit.

D: Load – It is an appliance connected in a circuit. It may just be a resistance (e.g., bulb) or a combination of different electrical components.

E: Voltmeter – It is used to measure the potential difference between two points of a circuit.

F: Rheostat – It is used to control the current in the circuit.

What is the function of a key (or switch) in an electric circuit?

A key or switch is used to put on or off, the current in the circuit.

Write symbols and state functions of each of following components in an electric circuit: (i) key, (ii) cell, (iii) rheostat, (iv) ammeter and (v) voltmeter.

It is used to control the current in the circuit.

; It is used to measure the current flowing through the circuit.

; It is used to measure the potential difference between two points of a circuit.

(a) Complete the circuit given in Fig. by inserting between the terminals  A and C. an ammeter.

(b) In the diagram, mark the polarity at the terminals of ammeter and indicate clearly the direction of flow of current in the circuit when the circuit is complete.

(c) Name and state the purpose of Rh in the circuit. (c) A rheostat is used to control the current in the circuit.

What are conductors and insulators of electricity? Give two examples of each.

The substances which allow electric current to flow through them easily are called conductors. Examples: Impure water and metals.

The substances which do not allow the electric current to flow through them are called insulators. Examples: Rubber and wood.

State two differences between a conductor and an insulator of electricity.

Distinguish between a closed circuit and an open circuit, with the use of suitable labelled diagrams.

A circuit is said to be closed when every part of it is made of a conductor and on plugging in the key or on being complete, current flows through the circuit.

A circuit is said to be open when no current flows through it. It can happen when the key is not plugged in or when any one of its components is not made of a conductor or when the circuit is broken

Write the condition required for a circuit to be a closed circuit.

For an electric circuit to be closed, every part of it must be made of conductors.

A cell is used to:

(a) measure current in a circuit

(b) provide current in a circuit

(c) check current in a circuit

(d) prevent current in a circuit.

provide current in a circuit

The unit of current is :

The insulator of electricity is which of the following materials listed below:

A charge 0.5 C passes through a cross section of a conductor in 5 s. Find the current.

A current of 1.5 A flow through a conductor for 2.0 s. What amount of charge passes through the conductor ?

When starter motor of a car is switched on for 0.8 s, a charge 24 C passes through the coil of the motor. Calculate the current in the coil.

Fig. 9.26 below shows two conductors A and B. Their charges and potentials are given in diagram. State the direction of (i) flow of electrons and (ii) flow of current, when both the conductors are joined by a metal wire.

When both the conductors are joined by a metal wire:

(i) Electrons will flow from A to B.

(ii) Current will flow from B to A.

How is the direction of flow of current between the two charged conductors determined by their potentials?

Explain the concept of electric potential difference in terms of work done in transferring the charge.

Electric potential difference between two conductors is equal to the work done in transferring a unit positive charge from one conductor to other conductor.

State and define the S.I. unit of potential difference.

S.I. unit of potential difference is volt (joule per coulomb).

Potential difference between two points is said to be 1 volt if work done in transferring 1 coulomb of charge from one point to the other point is 1 joule.

‘The potential difference between two conductors is 1 volt’. Explain the meaning of this statement.

Potential difference between two points is 1 volt; it means 1 joule of work is done in transferring 1 coulomb of charge from one point to the other point.

What do you understand by the term resistance?

The obstruction offered to the flow of current by the filament or wire is called its electrical resistance.

Explain why does a metal wire when connected to a cell offer resistance to the flow of current.

State and define the S.I. unit of resistance.

The S.I. unit of resistance is ‘ohm’ (volt per ampere).

The resistance of a conductor is said to be 1 ohm if a current of 1 ampere flows through it when the potential difference across it is 1 volt.

Ohm’s law states that the electric current flowing through a metallic wire is directly proportional to the potential difference V across its ends provided its temperature remains the same.

How are the potential difference (V), current (l) and resistance (R) related?

‘The resistance of a wire is 1 ohm’. Explain the meaning of this statement.

The resistance of a wire is 1 ohm; it means a current of 1 ampere will flow through the wire when the potential difference across it is 1 volt.

How is the current flowing in a conductor changed if the resistance of conductor is doubled keeping the potential difference across it the same?

If R is doubled,

From (i) and (ii), it is clear that current will be halved.

Resistance of a wire depends upon:

(i) Length of wire: Resistance is directly proportional to the length of a wire.

How is the resistance of a wire affected if its (a) length is doubled, (b) radius is doubled?

(a) Resistance of a wire is directly proportional to the length of a wire; so if the length is doubled, resistance is also doubled.

(b) Resistance of a wire is inversely proportional to the area of cross-section the wire. Thus, if radius is doubled, area increases four times and hence the resistance becomes one-fourth.

State whether the resistance of filament of a bulb will decrease, remain unchanged or increase when it glows.

Name the physical quantities of which the units are (i) volt, (ii) coulomb, (iii) ohm and (iv) ampere.

Current in a circuit flows in which of the following directions listed below:

(a) In direction from high potential to low potential

(b) In direction from low potential to high potential

(c) In direction of flow of electrons

(d) In any direction.

In direction from high potential to low potential.

The unit of potential difference is as shown below:

On increasing the resistance in a circuit, the current in it

(d) Nothing can be said.

In transferring 1.5 C charge through a wire, 9 J of work is needed. Find the potential difference across the wire.

A cell of potential difference 12 V is connected to a bulb. The resistance of filament of bulb when it glows is 24Ω. Find the current drawn from the cell.

A bulb draws current 1.5 A at 6.0 V. Find the resistance of filament of bulb while glowing. 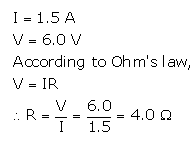 A current 0.2 A flows in a wire of resistance 15Ω. Find the potential difference across the ends of the wire.

What is meant by the efficient use of energy?

Efficient use of energy means to reduce cost and amount of energy to be used to provide us the various products and services.

State two ways to save the energy.

Two ways to save energy:

How does the proper insulation of home save energy?

By properly insulating a home, it is possible to maintain a comfortable temperature inside. It will reduce the cost of heating devices in winter and cooling devices in summer.

Which of the following device is most efficient for the lighting purpose?

LED or light emitting diodes are most efficient for lighting purposes.

Give an example to explain that the use of modem eco-friendly technology is more efficient and less polluting.

Modern appliances like refrigerators make use of significantly less energy than older appliances as they have star rating according to their efficient use of electricity. Higher the star rating, higher is the efficiency.

Describe three ways for the efficient use of energy.

Three ways to use energy efficiently:

What social initiatives must be taken for the sensitive use of energy?

The following social initiatives need to be taken:

The most non-polluting and efficient lighting device is :

The most non-polluting and efficient lighting device is the LED.

IEA is the short form of :

IEA is the short form of international energy agency.