(a) A current carrying coil when suspended freely can rest in any direction.
Answer. False.

(b) A coil carrying current behaves like a magnet.
Answer. True.

(c) In an electromagnet, the core is made up of copper.
Answer. False.

(e) An electromagnet with soft iron core is a temporary magnet.
Answer. True.

(f) We use cell as the source of electricity to run an electric immersion rod.
Answer. False.

(j) Our body is a conductor of electricity.
Answer. True.

(k) For a circuit to be complete, every part of it must be made up of conductors.
Answer. True.

(l) All metals are conductors of electricity.
Answer. True.

(m) The switch should not be touched with wet hands.
Answer. True.

(n) A switch is an on-off device in an electric circuit.
Answer. True.

2. Fill in the blanks Solutions of Electricity and Magnetism ICSE Class-7th

(a) A magnet has two poles.
(b) Like poles repel each other and unlike poles attract.
(c) An electromagnet is used to separate large mass of iron scrap.
(d) The strength of magnetic field of an electromagnet is increased by inserting a core of soft iron.
(e) In a torch we use dry cell as the source of electricity.
(f) To light a table lamp and to run a refrigerator, we use mains as the source of electricity.
(g) A group of two or more cells is called a battery.
(h) Conductors pass electricity through them.
(i) Insulators do not pass electricity through them. (a) A freely suspended magnet rests in

(b) Electromagnets are made up of

(c) An electromagnet is used in

(d) The purpose of armature in an electric bell is

to make and break the circuit

(e) In a torch, the source of electricity is

(f) Electricity can flow through

(g) Electricity does not flow through

(h) We should not touch the switch with wet hands otherwise

electricity may pass through our body

Inference — In every case, the magnet comes to rest in a north- south direction which shows its directive property.
Observation and Inference —

— If the rod is attracted towards the bar magnet, the rod may be magnet or not.
— But if the rod remains in the same direction of rest as in the start of the experiment, it show it is not a magnet.

How will you test whether a given rod is made of iron or not?
Answer:
Bring a magnet near the rod if the rod is attracted by the magnet then it will be made of iron else not.

You are given two similar bars. One is a magnet and the other is of soft iron. How will you distinguish and identify them ?
Answer:
Take first bar and suspend it in a stand with the help of a thread. So that it is free to rotate in horizontal plane. Note the direction in which it sets itself. If the direction is North and South it may be magnet. Again rotate it, if this time again it sets itself in north and south direction, it is a magnet, otherwise, it is iron.
Now repeat above experiment with second bar and in the same way find it if it sets always in north and south direction then it will be a magnet.

You are given a magnet. How will you use it to find north-south direction at a place?
Answer:

ow if you bring the South pole of the magnet B near the north pole of the suspended magnet A as shown in figure without touching it, you will observe that the two poles attract each other.

The above experiment shows that the like poles repels each other while the unlike poles attract each other.

“Poles exist in pair”. Comment on this statement.
Answer:
The magnetic poles always exist in pairs. It is not possible to separate the two poles of a magnet.
If a bar magnet is broken at the middle in two parts each part is found to be a magnet. Each part has the property to attract the small iron pieces. Each part rests in the North-South direction when suspended such as to swing freely. This shows that the new poles are formed at the broken ends.
If these pieces are broken again and again, each part will still found to be a complete magnet. Each part contains both the poles (N-pole and S-pole). Thus, the two poles of a magnet exist simultaneously.

What is a magnetic compass ? State its use.
Answer:
Magnetic compass is a device which is used to locate the direction of a place. It always rests in a North-South direction. It is used in the navigators in ships, submarines, aeroplanes etc.

Draw a labelled diagram to make a soft iron bar as an electromagnet. Describe in steps the procedure.
Answer:
Usually, the electromagnets are made in two shapes :
(1) bar or I shaped magnet and (2) horse shoe or U shaped magnet.

You are given a U shaped soft iron piece, insulated copper wire and a battery. Draw a circuit diagram to make a horse shoe electromagnet.
Answer:
End A becomes S-pole and B becomes N-pole. 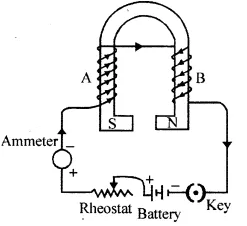 State two ways by which the strength of magnetic field of an electromagnet can be increased.
Answer:

The magnetic field of the electromagnet can be increase in the following two ways :

Draw a neat and labelled diagram of an electric bell and describe its working.
Answer:
Working of the bell— Principle of working of electromagnetism When the switch is pushed on, the circuit gets completed and current stalls flowing through the U-shaped electromagnet which creates magnetic field in the core. This attracts the iron armature. Now when the armature moves towards the electro-magnet, the hammer strikes the gong and the bell rings. But as the armature moves towards the electromagnet, the contact with the adjustment screw breaks which breaks the closed circuit and stops the current. Now when there is no current there is no electromagnetism and the armature returns to the original position. This making and breaking of the circuit of the electromagnet continues as long as the button remains pressed.

The incomplete diagram of an electric bell is given in fig. Complete the diagram and label its different parts.

What is declination ? Draw a diagram to show the angle between the declination and true direction of geographic north. 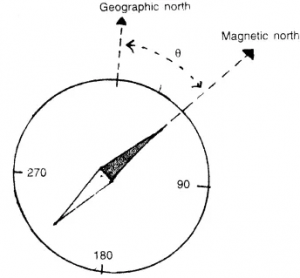 What is a battery?
Answer:
If we use a group of two or more cells, it is called a battery. A battery is used where we require more electricity.

Take two torch bulbs A and B. Connect them to a cell through a switch as shown in fig. The bulbs are said to be in series. Close the switch (i.e., the circuit it completed), you will see that both the bulbs glow.

Now take out the connection of the bulb B . and Now close the switch, you will observe that the bulb A does not glow because the circuit is now incomplete.

Now replace the bulb B by a fused bulb fig. and close the switch. Again you will see that the bulb A does not glow. This is because the circuit being in series, is still incomplete.

You are provided with a torch bulb, a cell and two plastic coated f metal wires. Draw a diagram to show a complete circuit to light the bulb.
Answer:
Take two bulbs A and B. Connect them through switches S1 and S2 in parallel as shown in fig. Close both the switches. You will see that both the bulbs glow. 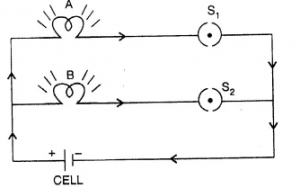 In which of the following case the bulb will glow :

Distinguish between conductors and insulators of electricity. Give two examples of each.
Answer:
Conductors

The following diagram shows four circuits A, B, C and D. Each circuit has a cell and a torch bulb. Name the circuits in which the bulb will glow ? Give a reason to your answer 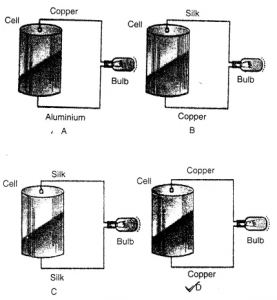 The diagram given below shows a bulb connected with a cell having terminals A and B. Mark the direction of current in the bulb. 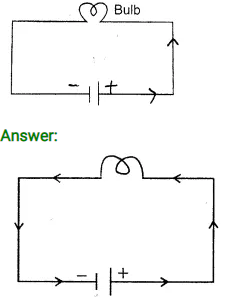 Current always flows from +ve terminal to the -ve terminal of a cell.

State the function of each of the following in an electric circuit and draw its symbolic representation: (1) Switch and (2) Cell.
Answer: 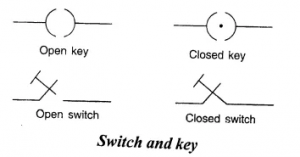 Draw a circuit diagram for a bulb connected to a cell with a switch. Mark arrow in the diagram to indicate the direction of flow of current.
Answer: 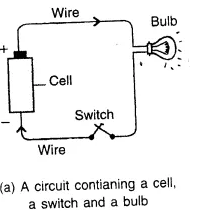 In which arrangement are the appliances connected in the electric circuit of our homes, Series or Parallel ? Give one reason for your answer.
Answer:
Parallel circuit: When the circuit is in parallel, the appliances work independently. This is the reason that in our household wiring system, all the circuits are in parallel. Every appliance when put on, works on its own without the interruption of the other appliance.

State two precautions that you must take when switching on an electric circuit.
Answer:
Precautions to be taken before the circuit is switched on

Before the circuit is switched on, following precautions must be taken :