(a) The frictional force acts in the direction of motion of body
Answer. False

(b) The unit of weight is kilogram
Answer. False

(c) A force can change the direction of motion of a moving body.
Answer. True

(d) A force increases the mass of the body when applied on it.
Answer. False

(e) The force of friction is always disadvantageous.
Answer. False

(f) The sliding friction is more than the rolling friction.
Answer. True

(a) Force is applied as push or pull.
(b) On squeezing a gum tube, its shape changes.
(c) On pulling a string, its length increases.
(d) A moving football when kicked, its direction of motion changes.
(e) On applying brakes on a moving car, its speed slows down.
(f) We use ball bearings to reduce the friction.
(g) Friction opposes the motion.
(h) Lubricants are used to reduce friction.
(i) Friction causes wear and tear of moving parts of machine. 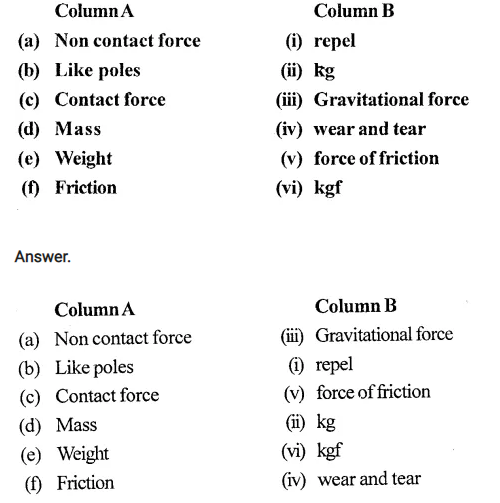 (a) A body falls downwards because of

(b) A force does not change

(c) A force to be expressed correctly requires

both the magnitude and direction

(e) Friction is reduced by

4.-sprinkling sand on the surface.

has all the above disadvantages

(g) Friction is increased if

1.-an oil is sprayed

2.-the surfaces are made wet

3.-the surfaces are made dry

4.-the surfaces are polished

the surfaces are made dry

Name the term used for the push or pull ?

Give one example each of a force as

Explain the meaning of the term force.
Answer:
Force: Force is a physical cause that changes or may tend to change the state of rest or the state of motion of an object. The S.I. unit of force is Newton.

What effect can a force have on a stationary body ?

Answer:
When a force is applied on a stationary body, it begins to move.

State the effect produced by a force in the following cases :
(a) The sling of a rubber catapult is stretched
(b) A man pushes a heavy cart
(c) A player uses his stick to deflect the ball .
(d) A cyclist applies brakes
(e) A spring is compressed.
Answer:

(a) The shape and size of catapult changes i.e., its length increases.
(b) The heavy cart begins to move.
(c) The direction of the ball changes.
(d) The speed of the moving cycle is slowed down.
(e) There is change in size and shape of spring.

(i) An apple falls from a tree
Answer.Gravitational force
(j) A man rows a boat.
Answer. Muscular force.

What do you mean by the gravitational force ? Give an example to illustrate it.
Answer:
The force of attraction on a body by earth is called gravitational force.
Example : The leaves and fruits fall from a tree downwards towards the ground, water in a river flows down streams, a ball thrown up goes to a height and then returns back on ground are some examples of motion due to gravitational force.

Define the term “weight of a body”
Answer:
Weight: The weight of the body is the force with which the earth attracts it towards the centre. It depends on acceleration due to gravity.

What do you understand by the term friction ?
Answer:
Friction: Friction is that force which opposes the relative motion between the two surfaces that are in contact with each other.

Give an example to illustrate the existence of force of friction.
Answer:
If we stop paddling our bicycle, it gradually slows down and ultimately it stops after travelling a certain distance. This is due to frictional force between bicycle and ground.

Arrange the following in descending order :

A body needs a force F1 just to start motion on a surface, a force F2 to continue its motion and a force F3 to roll on the surface. What is