What is heat? Write its S.I. unit.

Heat is the energy of random motion of molecules constituting the body.

Two bodies at different temperatures are placed in contact. State the direction in which the heat will flow.

Name the S.I. unit of heat and how is it related to the unit calorie?

Temperature is the parameter which tells the thermal state of a body (i.e. the degree of hotness or coldness).

The S.I. unit of temperature is ‘kelvin’

Why does a piece of ice feel cool to touch? Explain.

On touching a piece of ice, heat flows from our hand (hot body) to the ice (cold body), and hence, it appears cold.

Distinguish between heat and temperature.

Heat is a form of energy obtained due to the random motion of molecules in a substance but temperature is a quantity which decided the direction of flow of heat when two bodies at different temperature are placed in contact. Two quantities having the same amount of heat may differ in temperature.

What do you understand by thermal expansion of a substance?

The expansion of a substance on heating is called thermal expansion.

Brass and iron expand on heating.

Water contracts on heating from 0 to 4.

Silver iodide contracts on heating from 80 to 141.

What do you mean by the anomalous expansion of water?

At what temperature is the density of water maximum? State its value.

State the volume changes observed when a given mass of water is heated from 0°C  to 10 °C  . Sketch a temperature-volume graph to show the behaviour.

Draw a graph to show the variation in density of water with temperature in the range from 0 °C to 10 °C. 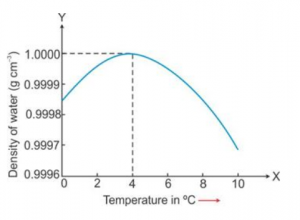 A given mass of water is cooled from 10°C to 0°C. State the volume changes you will observe. Represent these changes on a temperature-volume graph. 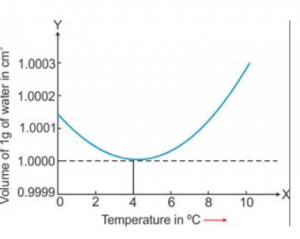 Describe an experiment to show that water has maximum density at 4°C. What important consequences follow this peculiar property of water? Discuss the importance of this phenomenon in nature.

Hope’s experiment to demonstrate that water has maximum density at 4: 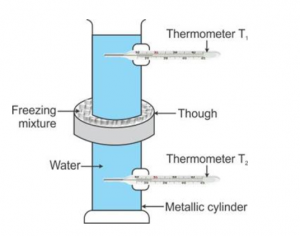 Hope’s apparatus consists of a tall metallic cylinder provided with two side openings P and Q, P near the top and Q near the bottom, fitted with thermometers T1 and T2 in them. The central part of the cylinder is surrounded with a cylindrical trough containing a freezing mixture of ice and salt. The cylinder is fitted with pure water at room temperature.

(i) Initially, both thermometers T1 and T2 are at the same temperature.

As the freezing mixture cools water in the central portion of the cylinder, water contracts and its density increases, consequently it sinks to the bottom, thereby causing the reading of the lower thermometer T2 to fall rapidly. The reading of the upper thermometer T1 does not change as the temperature of water in the upper part does not change. This continues till the entire water below the central portion reaches 4°C .

On cooling further below 4 °C , due to anomalous expansion, water of the central portion expands, so its density decreases and hence it rises up. As a result, reading of the upper thermometer T1 falls rapidly to 0 °C and water freezes to form ice at 0 °C near the top. This proves that water has maximum density at 4.°C

This anomalous expansion of water helps in preserving the aquatic life during the very cold weather.

In winters, when the temperature falls, the top layer of water in a pond contracts, becomes denser and sinks to the bottom. A circulation is thus set up until the entire water in the pond reaches its maximum density at 4°C  . If the temperature falls further, then the top layer expands and remains on the top till it freezes. Thus, even though the upper layers are frozen, the water near the bottom is at 4 °C and the fishes can survive in it easily.

A deep pond of water has its top layer frozen during winter. State the expected temperature of water layer (i) Just in contact with ice and (ii) At the bottom of pond.

Draw a diagram showing the temperature of various layers of water in an ice covered pond. 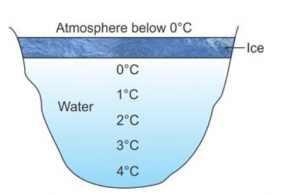 Explain the following statements listed below:

(a) Water pipes in colder countries often burst in winter.

(b) In winter, water tanks (or ocean) start freezing from the surface and not from the bottom.

(c) Fishes survive in ponds even when the atmospheric temperature is well below 0°C.

(d) A hollow glass sphere which floats with its entire volume submerged in water at 4°C , sinks when water is heated above 4°C.

(e) A glass bottle completely filled with water and tightly closed at room temperature is likely to burst when kept in the freezer of a refrigerator.

(a) On winter nights, as the atmospheric pressure starts falling below 4 °C , water in the pipe lines expand and exert a great pressure on the pipes, causing them to burst.

(b) In winters, when temperature falls, the surface of water in the tank contracts, becomes denser and sinks to the bottom. A circulation is thus set up until the entire water in the tank reaches its maximum density at 4°C . If the temperature falls further, then the top layer expands and remains on the top till it freezes. Thus, water in a tank starts freezing from the top and not from the bottom.

(c) The anomalous expansion of water

helps preserve aquatic life during very cold weather. When temperature falls, the top layer of water in a pond contracts becomes denser and sinks to the bottom. A circulation is thus set up until water in the pond reaches its maximum density at 4 °C . If the temperature falls further, then the top layer expands and remains on the top till it freezes. Thus, even though the upper layer are frozen, the water near the bottom is at 4 °C and the fishes can survive in it easily.

(d) On heating water above 4 °C  the density of water decreases. As a result, the upthrust acting due to water on hollow glass sphere also decreases, which causes it to sink.

(e) Inside the freezer, when the temperature of water falls below 4 °C  , the water in the bottle starts expanding. If the bottle is completely filled and tightly closed, there is no space for water to expand, and hence, the bottle may burst.

Calorie is the unit of :

Calorie is the unit heat.

S.I. unit of temperature is:

The SI unit of temperature is kelvin (K).

Water shows anomalous behavior between 0 °C and 4 °C. Hence, when it is cooled it expands.

Density of water is maximum at:

Water shows anomalous behavior between 0 °C and 4 °C. It has lowest volume at 4 °C. Hence, its density will be maximum at 4 °C.