(a) On touching a lump of ice, we feel cold because some heat passes from our body to the ice.
Answer. True.

(c) All solids expand by the same amount when heated to the same rise in temperature.
Answer. False.

(e) Equal volumes of different liquids expand by different amounts when they are heated to the same rise in temperature.
Answer. True.

(g) A mercury thermometer makes use of the property of expansion of liquids on heating.
Answer. True.

(i) Water is a bad conductor of heat.
Answer. True.

(j) Medium is necessary for the transfer of heat by radiation.
Answer. False.

(l) Liquids are heated by conduction and radiation.
Answer. False.

Ans Fill in the blanks

(a) Heat is a form of energy.
(b) Temperature determines the degree of hotness or coldness of a body.
(c) On heating a body, its temperature rises.
(d) We use a thermometer for measuring the temperature of a body.
(e) The S.I. unit of temperature is kelvin.
(f) In a thermometer, the commonly used liquid is mercury.
(g) The temperature of a normal human body is 37 °C.
(h) A person is said to have fever if his body temperature is more than 98.6
(i) A hot metallic piece is placed in tap water contained in a bucket. Heat will flow from metallic piece to water.
(j) The temperature of boiling water is 100°C.
(k) Liquids expand more than the solids.
(l) Gases expand more than the liquids.
(m) Heat transfer in solids is by conduction.
(n) Heat transfer in liquids and gases is by convection.
(o)Metals are conductors of heat.

(p) Still air is an insulator of heat.
(q) Black and dull surfaces are good absorbers of heat. (a) If we add a lump of ice to a tumbler containing water,

1.-heat flows from water to ice

2.-heat flows from ice to water

3.-heat flows from water to ice if water is more

4.-heat flows from ice to water if ice is more

heat flows from water to ice

(b) The temperature of pure melting ice is

(d) Which of the statement is correct

(e) Heat in a liquid is transferred by

(f) In the process of convection, heat travels

What is heat ? State its S.I. unit.
Answer:
Heat is a form of energy which flows. It is the energy of motion of molecules constituting the body.
The unit of heat is same as that of energy, The S.I. unit of heat is joule (abbreviated as J) and other common units of heat are calorie and kilo calorie, where 1 kcal = 1000 cal.

What is meant by the term temperature.

Answer:
Temperature is a quantity which tells the thermal state of a body (i.e. the degree of hotness or coldness). It determines the direction of flow of heat when the two bodies at different temperatures are placed in contact. 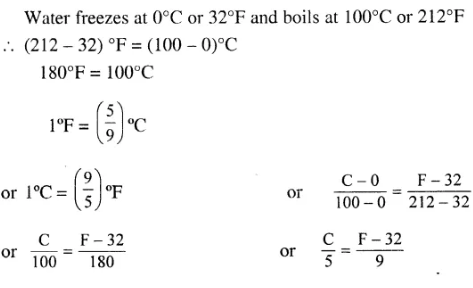 How is the size of a degree defined on a Celsius scale ?
Answer:
The interval between the ice point and steam point divided by 100 (hundred) equal parts is called a degree on the Celsius scale.

How is the size of a degree defined on a Fahrenheit scale?
Answer:
The interval between the ice point and steam point divided into 180 equal parts is called a degree on the Fahrenheit scale.

What is the Celsius scale of temperature ?
Answer:
Celsius scale is that which has ice point as 0°C and steam point marked as 100°C.

The fig. shows a glass tumbler containing hot milk which is placed in a tub of cold water. State the direction in which heat will flow. Answer:
When we bring two objects of different temperature together, energy will always be transferred from hotter to the cooler object.
Here, also heat will flow from hot milk tumbler to tub of cold water.

Draw a neat labelled diagram of a laboratory thermometer.
Answer:

Why do telephone wires sag in summer ?
Answer:

One end of a steel girder in a bridge is not fixed, but is kept on roliers. Give the reason.
Answer:

In the construction of a bridge, steel girders are used. One end of the girder is fixed into the concrete or brick pillars and its other end is not fixed, but it is placed on rollers. The reason is that if there is any rise (or fall) in temperature of atmosphere, the girder can freely expand (or contract) without affecting the pillars.

Describe one experiment to show that liquids expand on heating.
Answer:
(i) Take an empty bottle with a tight fitting cork having a hole drilled in its middle, a drinking straw, two bricks, a wire guaze and a burner.
(ii) Fill the bottle completely with water and add few drops of ink in it to make it coloured.
(iii) Fix the cork in the mouth of the bottle and pass the drinking straw through the cork. Put some molten wax around the hole so as to avoid the leakage of water.

State one application of thermal expansion of liquids.
Answer:
Mercury is a metal found in liquid state. It expands more and uniformly over a wide range of temperature. So mercury is used as thermometric liquid.

Describe an experiment to show that air expands on heating.
Answer:
(i) Take an empty bottle. Actually the empty bottle contains air. Attach a rubber balloon to its neck as shown in Figure. Initially, the balloon is deflated.
(ii) Place the bottle in a water bath containing boiling water. After some time you will notice that the balloon gets inflated as shown in Figure. The reason is that the air inside the bottle expands on heating and it fills the balloon.

State which expands more, when heated to the same temperature : solid, liquid or gas ?
Answer:
Gases expand much more than the liquids and the solids. Like liquids, the gases do not have a definite shape, so they also have only the cubical expansion.

Why do we use cooking utensils made up of copper.
Answer:

Cooking utensils are made of metals such as copper, aluminium, brass, steel etc., so that heat is easily conducted through the base to their contents. But they are provided with handles of bad conductors (such as ebonite or wood) to hold them easily as handles will not conduct heat from the utensil to our hand.

Why is a tea kettle provided with an ebonite handle ?
Answer:
Tea kettles are provided with wooden or ebonite handles. The wood or the ebonite being the insulators of heat, does not pass heat from the utensils to our hand. Thus, we can hold the hot utensils or pans comfortably by their handles.

(b) During very cold weather, the water pipes are covered with cotton. The cotton has air trapped in its fine pores. The cotton and air are the insulators of heat. They do not pass heat from water inside the pipes to the outside atmosphere. Thus, cotton prevents the water in the pipes from freezing.

Why are quilts filled with fluffy cotton ?
Answer:
Quilts are filled with fluffy cotton. Air is trapped in the fine pores of cotton. Cotton and air are the insulators of heat. They check heat from our body to escape and thus keep us warm.
The newly made quilts are warmer than the old ones because in the old quilts, there is no air trapped in the cotton.

State the direction of heat transfer by way of convection.

Answer:
By the process of convection, heat is always transferred vertically upwards. The reason is that the medium particles near the source of heat absorb heat from the source and they start moving faster. As a result, the medium at this place becomes less dense so it rises up and the medium from above being denser, moves down to take its place. Thus, current is set up in the medium which is called a convection current. The current continues till the entire medium acquires the same temperature.

Why is a ventilator provided in a room ?
Answer:
Ventilators and windows are provided in rooms for proper ventilation. The reason is that when we breathe out in a room, the air in the room becomes warm and impure. The warm air is less dense i.e. lighter, so it rises up and moves out through the ventilators. Then the cold fresh air comes in the room through the windows to take its place. Thus the continuous circulation of fresh air keeps the air in the room fresh

What are the land and sea breezes ? Explain their formation.
Answer:
LAND BREEZE : Blowing of breeze (air) from land towards sea is called land breeze.

During night land and sea water both lose heat. Specific heat capacity of land being very low as compared to that of sea water, land loses heat energy fast and cools more rapidly as compared to sea. Sea water being at higher temperature, the air above it becomes lighter and rise up. Air from land being at higher pressure. So air from land starts blowing towards sea and gives rise to Land Breeze.

SEA BREEZE : Blowing of breeze (cold air) from sea towards land during the day is called the SEA BREEZE. During day time land and sea both are heated equally by the sun, but land has very low specific heat capacity as compared to sea, is heated up more quickly. Thus air above land due to heat becomes lighter and rises up. Thus pressure decreases and cold and humid air above the sea starts blowing towards land, thereby giving rise to SEABREEZE.

Explain briefly the process of heat transfer by radiation.
Answer:
RADIATION. “The transfer of heat energy from a hot body to cold body directly, without heating the medium between two bodies is called RADIATION.”
The radiant heat or thermal radiation is of the form of ELECTROMAGNETIC WAVES. These waves can travel even in vacuum in all directions in straight line with the speed of light. They do not heat the medium through which they pass. Heat radiations are also called INFRA-RED RADIATIONS because the wavelength of heat radiations is longer than that of visible light. These radiations can cause heating effect only if they are absorbed by some material.

The bottom of a cooking utensil is painted black. Give the reason.
Answer: 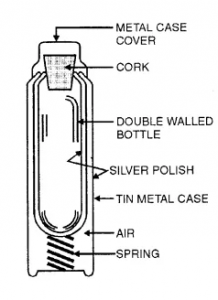 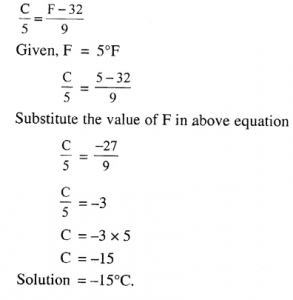 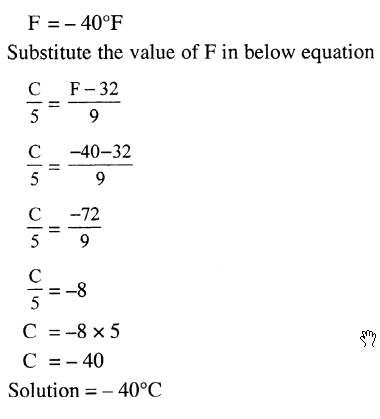