(a) Evaporation is rapid on a wet day.
Answer. False.

(b) Evaporation takes place only from the surface of liquid.
Answer. True.

(c) All molecules of a liquid take part in the process of evaporation.

(d) Temperature of a liquid rises during boiling or vaporization
Answer. False.

(e) All molecules of a liquid take part in boiling.
Answer. True.

(g) All solids expand by the same amount when heated to the same rise in temperature.
Answer. False.

(i) Equal volumes of different liquids expand by the different amount when they are heated to the same rise in temperature.
Answer. True.

(k) A mercury thermometer makes use of the property of expansion of liquids on heating.
Answer. True. 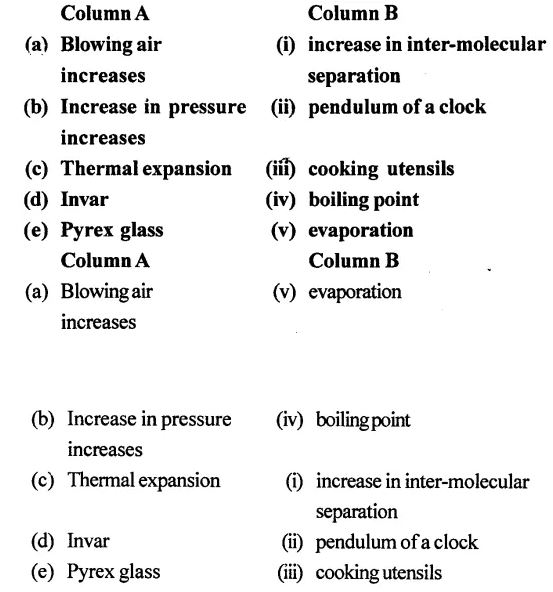 only the molecules at the surface escape out

(b) The rate of evaporation of a liquid increases when :

air is blown above the surface of liquid

c) During boiling or vaporization

increasing the pressure, on liquid

(d) The boiling point of a liquid is increased by

increasing the pressure, on liquid

the rod B elongates more than the rod A

(f) Two rods A and B of the same metal, same length, but one solid and the other hollow, are heated to the same rise in temperature.
Then

both the rods A and B expand the same.

(h) The increase in length of a metal rod depends on

all the above three factors

(i) The correct statement is

What is matter? What is it composed of.

Anything that has mass, occupies volume and can be felt by our senses is matter. It is composed of molecules.

Name the three states of matter and distinguish them on the basis of their (i) volume, and (ii) shape

THREE STATES OF MATTER:
(i) SOLID

DISTINCTION BETWEEN LIQUID AND VAPOUR ON THE BASES OF:

What is evaporation? Explain it on the basis of molecular motion.

The change of liquid into its vapor at all temperatures from its surface is called evaporation.

The intermolecular spaces in liquids are more and the molecular force of attraction is less which makes them move throughout the liquid.

They cannot escape the surface of liquids because of less kinetic energy, when heated they acquire sufficient kinetic energy and they overcome the attractive forces of other molecules. On escaping the molecules form the vapor of the liquid.

Do all molecules of a liquid take part in evaporation? If not, explain your answer.

No, not all molecules of liquid do not take part in evaporation, those molecules which acquire sufficient kinetic energy escape the surface by overcoming forces of attraction of other molecules.This continues till all the liquid evaporates.

No heat is supplied to a liquid during evaporation. How does then the liquid change into its vapours?

Comment on the statement, ‘evaporation is a surface phenomenon’.

Evaporation is the change of liquid into vapours at all temperatures from the surface. It takes place at surface as molecules which are at surface and gain sufficient kinetic energy from the surroundings above to overcome attractive forces. 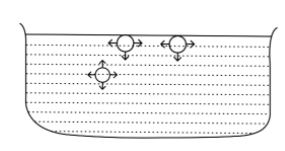 Why is cooling produced when a liquid evaporates?

To change liquid into vapours, heat is needed which is taken from surroundings and temperature of the container or body itself falls and cooling is produced.

(a) When air is blown above the liquid.

(b) When surface area of liquid is increased

(c) When temperature of liquid is increased.

(a) The factors that decide the rate of evaporation are:

When air is blown above the surface of liquid, it will take away the liquid carrying air particles from the air above the liquid, resulting in decrease in humidity and increase in rate of evaporation.

(b) The factors that decide the rate of evaporation are:

On increasing the surface area, the number of molecules in contact at the surface of liquid increases, and evaporation takes place rapidly.

(c) The factors that decide the rate of evaporation are:

The increase in temperature increases the kinetic energy of the molecules, they escape the force of attraction of molecules and evaporate faster.

What is boiling? Explain it on the basis of molecular motion?

The change of liquid to vapours on heating at a constant temperature is called boiling.

Why does bubbles appear when a liquid is heated?

On heating, liquid starts changing into its vapour state at the place where it is being heated. The liquid converts to gas which appears in the form of bubbles.

What is the change in average kinetic energy of molecules of a liquid during boiling at its boiling point?

How is the heat energy supplied to a liquid used during boiling at a fixed temperature?

During boiling, the heat energy supplied is used in increasing the energy of the water molecule, which changes its state from liquid to gaseous.

Name two ways of change of liquid state to the vapour state and distinguish them.

Two ways of change of liquid state to the vapour state are:

What do you understand by thermal expansion of a substance?

Give two examples of the substance which expand on heating.

Iron and water expand on heating.

Describe an experiment to demonstrate the thermal expansion in solids.

To show – Thermal expansion in solids 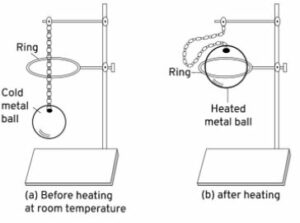 This is because the solid ball expands in size. On cooling, it can pass through the ring.

Observation – Solids expand on heating and contract on cooling.

State three factors on which depend the linear expansion of a metal rod on heating.

Factors on which linear expansion of rod depends:

(i) Length of rod

(iii) Nature of material of rod

Two iron rods – one 10 m long and other 5 m long, are heated to the same rise in temperature. Which will expand more?

Two identical rods of copper are heated to different temperatures – one by 5°C and the other by 10°C. Which rod will expand more?

Two rods with the same length and material are heated to different temperatures.

One rod of copper and another identical rod of iron are heated to the same rise in temperature. Which rod will expand more? Give reason.

Expansion depends on the nature of material, when two identical rods are of different material and heated to the same rise in temperature, the copper rod will expand more than the iron rod as copper is a better conductor of heat than iron.

Two identical rods – one hollow and the other solid, are heated to the same rise in temperature. Which will expand more?

When two identical rods are heated at the same temperature, they will expand by the same amount on heating as the material of the rods are the same.

In the ball and ring experiment, if the ball after heating is left to cool on the ring for sometime, the ball again passes through the ring. Explain the reason.

(a) The telephone wires break in winter.

(b) Iron rims are heated before they are fixed on the wooden wheels.

(c) The gaps are left between the successive rails on a railway track.

(e) A cement floor is laid in small pieces with gaps in between.

(a) Most telephone wires are made out of copper, which contracts with drop in temperature and hence breaks in winter if it becomes too tight between the poles.

(c) The gaps are left between the successive rails for making space for their expansion when there is rise in temperature in summers.

(e) Small pieces of cement expand in summers. So, to allow expansion, gaps are left between small pieces.

Why is one end of a steel girder in a bridge kept on rollers instead of fixing it in pillar?

When temperature increases, the metal bridge expands and the rollers slide to allow for expansion otherwise the bridge may break the pillar.

A metal plate is heated. State three factors on which increase in its area will depend.

Factors on which increase of metal plate area depends are:

(iii) Nature of material of plate.

A cubical metal solid block is heated. How will its volume change?

When a solid is heated, it expands in all directions. When a cubical metal solid block is heated the volume of the cube also increases.

Describe an experiment to show that liquids expand on heating.

To show – Liquids expand on heating

Experiment – Take a round bottom flask and fill it with water. Close its mouth with a cork having a delivery tube and mark the level of water as A.

Now heat the flask, we see that the level of water in the tube rises from A to a higher mark B.

Observation – This shows that liquids expand on heating.

State one application of thermal expansion of liquids.

A mercury thermometer is based on the application of thermal expansion of liquids. The bulb of the thermometer is kept in contact with a hot body, and mercury expands and level of mercury rises in the tube.

Describe an experiment to show that air expands on heating.

To show – Air expands on heating

Procedure – Take a glass flask with flat bottom and close its mouth with a cork having a capillary tube containing indicator visible in the tube. Keep it air tight. Now place the flask in hot water. This happens because air inside the flask expands with rise in temperature. 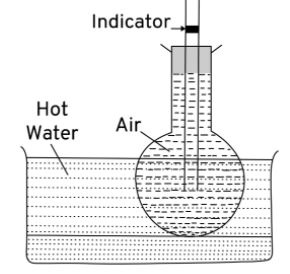 Observation – This shows that air expands on heating.

An empty glass bottle is fitted with a narrow tube at its mouth. The open end of the tube is kept in a beaker containing water. When the bottle is heated, bubbles of air are seen escaping into water. Explain the reason.

On heating, the air in the bottle expands and escapes the water in the form of bubbles.

Which of the following will expand more, when heated to the same temperature: (a) solid (b) liquid and (c) gas?

Gas will expand more as the intermolecular forces of attraction in gas molecules is less and kinetic energy is maximum.

Describe an experiment to show that the same volume of different liquids heated to the same rise in temperature expand by different amounts.

To show – Cubical expansion of different liquids is different

Experiment – Take four identical glass flasks each fitted with a narrow glass tube through a cork at its mouth. Fill flask A with water, B with kerosene, C with alcohol, D with Benzene. Keep all 4 flasks in a hot water bath with enough hot water in it. After some time we will see that different liquids rise to different levels. Water expands the least and benzene expands the most.

Benzene will expand the most.

Though liquids expand on heating, water does not expand between 0°C to 4°C instead it contracts as water has maximum density at 4°C. It expands above 4°C.

What do you mean by anomalous behaviour of water?

Substances expand on heating, and their density decreases. Water does not expand between 0°C to 4°C instead it contracts. It expands above 4°C. This means water has maximum density at 4°C. This is called anomalous behaviour of water.

How does the density of a substance (solid, liquid and gas ) change on heating?

An iron washer is heated.

(a) State the effect on its mass.

(b) State the effect on its internal diameter

(c) State the effect on its external diameter

(d) State the effect on its density.

(a) Mass does not change in heating.

(b) Internal diameter increases as the washer expands.