ICSE Chemistry 2021 Specimen Paper for Class-10 Solved on further reduced Syllabus. Specimen Sample model Paper of Chemistry for ICSE Class-10 is helpful for student appearing in 2021 exam of council. This paper content is based on further reduced syllabus as latest council guideline for 2021 exam. Visit official website CISCE  for detail information about ICSE Board Class-10 Physics.

(a) Fill in the blanks from the choices given in brackets: [5]

(i) The energy required to remove an electron from a neutral isolated gaseous atom and convert it into a positively charged gaseous ion is called ………. (electron affinity, ionisation potential, electronegativity)
(ii) The compound that does not have a lone pair of electrons is (water, ammonia, carbon tetrachloride)
(iii) When a metallic oxide is dissolved in water, the solution formed has a high concentration of ions. (H+, H3O+, OH–)
(iv) Potassium sulphite on reacting with hydrochloric acid releases ………….. gas. (Cl2, SO2, H2S)
(v) The compound formed when ethene reacts with Hydrogen is ………………………… (CH4, C2H6, C3H8)

(b) Give one word or a phrase for the following statements: [5]

(i) The energy released when an electron is added to a neutral gaseous isolated atom to form a negatively charged ion.
(ii) Process of formation of ions from molecules which are not in ionic state.
(iii) The tendency of an element to form chains of identical atoms.
(iv) The property by which certain hydrated salts, when left exposed to atmosphere, lose their water of crystallization and crumble into powder.
(v) The process by which sulphide ore is concentrated.

(c) Choose the correct answer from the options given below: [5]

(v) The aim of the Fountain Experiment is to prove that:
(A) HCl turns blue litmus red
(B) HCl is denser than air
(C) HCl is highly soluble in water
(D) HCl fumes in moist air.

(f)  Give reasons for the following:

(i) Iron is rendered passive with fuming nitric acid.

(iii) Ionisation potential of the element increases across a period.

(i) Give the IUPAC name for each of the following: [5]

(ii) Write the structural formula of the two isomers of butane.

(a) Arrange the following as per the instruction given in the brackets:

(b) State the type of Bonding in the following molecules: [2]

(c) State your observation in each of the following cases:

(i) When dilute hydrochloric acid is added to sodium carbonate crystals.

(iii) At the cathode when acidified aqueous copper sulphate solution is electrolyzed with copper electrodes.

(iv) When calcium hydroxide is heated with ammonium chloride crystals.

(a) Study the figure given below and answer the questions that follow: 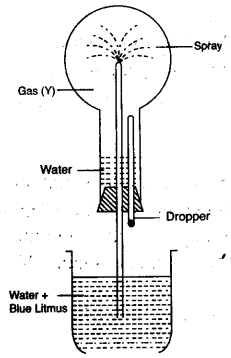 (ii) What property of gas Y does this experiment demonstrate?

(iii) Name another gas which has the same property and can be demonstrated through this experiment.  [3]

(i) Name the other ion formed when ammonia dissolves in water.

(ii) Give one test that can be used to detect the presence of the ion produced.  [2]

In this table H does not represent hydrogen. Some elements are given in their own symbol and position in the periodic table. While others are shown with a letter.
With reference to the table answer the following questions:

(i) Identify the most electronegative element. [1]

(ii) Identify the most reactive element of group 1. [1]

(iii) Identify the element from period 3 with least atomic size. [1]

(iv) How many valence electrons are present in Q? [1]

(v) Which element from group 2 would have the least ionization energy? [1]

(vi) Identify the noble gas of the fourth period. [1]

(vii) In the compound between A and B what type of bond would be formed and give the molecular formula for the same. [2]

(b)  Name the following metals:

(i) A metal present in cryolite other than sodium.

(ii) A metal which is unaffected by dilute or concentrated acids.

(c) The following questions are based on the preparation of ammonia gas in the laboratory:

(i) Explain why ammonium nitrate is not used in the preparation of ammonia.

(ii) Name the compound normally used as a drying agent during the process.

(iii) How is ammonia gas collected?

(iv) Explain why it is not collected over water. [4]

(b)  Mr. John wants to electroplate his key chain with nickel to prevent rusting. For this electroplating:

(c)  By the addition of only one solution how would you distinguish between dilute hydrochloric acid and dilute nitric acid?

(i) Ionic compounds have a high melting point.
(ii) Inert gases do not form ions.
(iii) Ionisation potential increases across a period, from left to right.
(iv) Alkali metals are good reducing agents.
(v) Conductivity of dilute hydrochloric acid is greater than that of acetic acid.

(i) Name the most common ore of the metal aluminum from which the metal is extracted. Write the chemical formula of the ore. [4] (ii) Name the process by which impure ore of aluminum gets purified by using concentrated solution of an alkali.
(in) Write the equation for the formation of aluminum at the cathode during the electrolysis of alumina.

(b) Answer the following questions based on the extraction of aluminium from alumina by Hall – Heroult’s Process: [4]

(a) Give the chemical formula of: [3]
(i) Bauxite
(ii) Cryolite
(iii) Sodium aluminate

(i) Cone. HNO3 being a strong oxidising agent oxidises iron, forming a layer that makes iron non reactive or passive.

(iv) Alkali metals readily lose electrons from their valence shell and get oxidised. So they behave as good reducing agents. 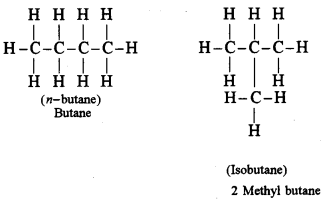 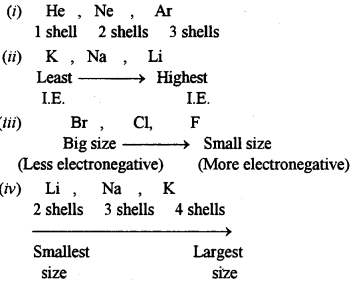 (i) Brisk effervescence with the release of a colourless odourless gas that extinguish a glowing splint and turns lime water milky i.e., CO2 gas is released.

(ii) A white ppt of Ca(OH)2 is obtained that remains insoluble in excess of NaOH.

(i) Hydroxyl ion (OH–) other than Ammonium ion.

(i) Ammonium nitrate is a highly explosive substance and can not be heated.

(iii) By downward displacement of air or upward delivery as it is lighter than air.

(iv) Ammonia is highly soluble in water so it cannot be collected over water.

(i) Ionic compounds have ions held strongly by electrostatic forces of attraction. These strong forces need more energy to be broken apart. Hence, they have high melting point.
(ii) Inert gases do not form ions because they have completely filled octet. They are extremely stable. Hence, they neither loose, nor gain electrons.
(iii) As we move from left to right along a period, the atomic size decreases due to the increase in nuclear charge thus more energy is required to remove the electron, hence ionisation potential increase.
(iv) Alkali metals have free electrons. They can easily loose electrons to form positive ions. The loss of electron is known as oxidation and the substance/element that lose electrons is said to be reducing agent.
(v) Hydrochloric acid is a strong acid. It splits to give more hydrogen ions as compared to acetic acid. Hence conductivity of dilute hydrochloric acid is more than that of acetic acid. 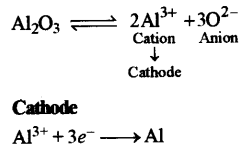 (i) Cryolite acts as a solvent and lower the fusion temperature from 2050°C to 950°C.
(ii) A layer of powdered coke is sprinkled over the surface of the electrolyte to reduce the heat loss by radiation and prevent the carbon rod from binning in air.
(iii) Cathode