ICSE Economics 2010 Paper Solved Class-10 Previous Year Questions for practice so that student of class 10th ICSE can achieve their goals in next exam of council. Hence by better practice of Solved Question Paper of Previous Year including 2010 is very helpful for ICSE student.

(b) What kind of division of labour do we see in the automobile industry? [2]

(c) Distinguish between sunk and floating capital. Give an example of each. [2]

(d) Explain the effect of inflation on fixed income groups and borrowers. [2]

(e) Which is the only factor of production that earns profits? Why? [2]

The two primary functions of money are as follow:

We see automobile industry in incomplete process of complex division of labour. In this kind of system the work is divided into different processes and sub-processes in such a way that only a part or a component of a commodity is produced.

Sunk Capital: Sunk capital can be used to produce only one type of commodity or service. For example, an ice factory.

Fixed income group class is worst affected by inflation because the purchasing power of their fixed income goes on decreasing with rising prices.

Borrower gains in inflation because the value of money was high when they borrowed but came down when they repaid their debts. But if debtor take loans during inflationary period the position is reversed.

(b) State two sources of Government income or revenue. [2]

(c) All capital is wealth but all wealth is not capital.

Explain why all wealth is not capital. [2]

(d) State whether each of the following is a direct or an indirect tax:

Two sources of Government income or revenue are:

(c) Wealth is anything which has utility, scarcity and is transferable. Capital is a produced means of production. It is first produced by man and then used for the other production of more goods. Since capital goods have all the features of wealth so all capital is wealth. But only that part of wealth is capital which is used in further production of goods.

example: Furniture in our house is our wealth but not capital but a car owned by a taxi-driver is his wealth as well as capital.

(a) Division of labour is not an unmixed blessing. Give one reason. [2]

(b) Is the expenditure incurred by the state on defence regarded as productive or unproductive? Give one reason. [2]

(c) Why is the central bank referred to as the “lender of the last resort”? [2]

(e) What kind of goods are X and Y if a rise in the price of X, increases the demand for Y? Give an example of such goods. [2]

** Answer has not given due to out of present syllabus.

(a) Division of labour is not an unmixed blessing because inspire of many advantages, there are certain disadvantages of specialization of labour like social evils of factory system, class-conflicts among workers etc.

(b) The expenditure incurred by the state on defence regarded as unproductive because these expenditures do not add to the productive efficiency of the economy directly as they are in nature of consumption.

(e) X and Y are substitute goods. Example: Coke and Pepsi.
A rise in the price of coke will cause an increase in the demand for Pepsi and vice-versa is also true.

(a) Price of a good falls from Rs. 20 per unit to Rs. 16 per unit. As a result, its demand rises from 80 units to 100 units. What can you say about the elasticity of demand by the Total Expenditure Method? [2]

(d) Briefly explain two exceptions to the law of demand. [2] 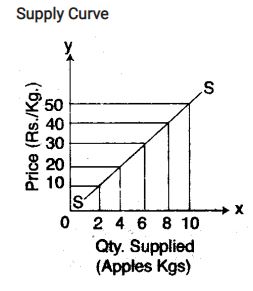 (a) Explain any three factors that affect productivity of land. State two characteristics of land that make it different from other factors of production. [5]

(a) Factors Affecting Productivity of Land:

Two main characteristics of land which distinguish it from other factors of production:

(b) Human Capital: Those hidden qualities in a person which earn him an income and cannot be transferred from one place to another is called human capital

Differences between extension in demand and increase in demand: 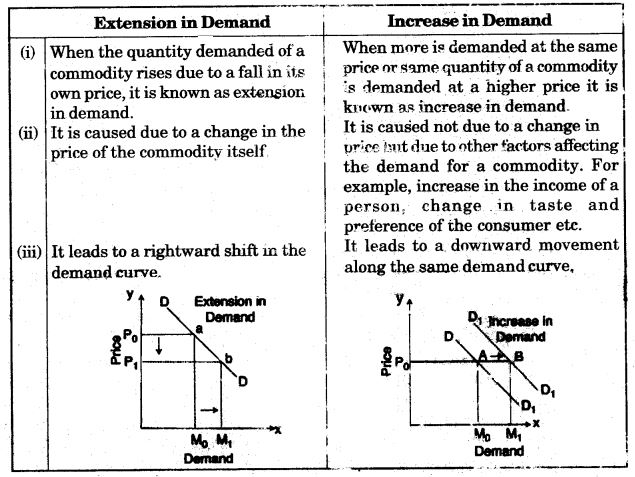 (b) Meaning of Supply: Supply is the quantity of goods offered for sale in a market, at given time, at given price.
Factors which determine the supply of commodity:

(a) Distinguish between Funded and Unfunded debt. Discuss three purposes of public debt. [5]

(b) Define inflation. Explain any four factors that cause demand pull inflation. [5]

(a) When the government makes arrangement for a separate fund for meeting the debt obligations, it is called funded debt. The funded debt is also called long-term public debt.
On the other hand, while taking loan if the government does not create any separate fund for the repayment of the principal sum along with interest, it is called unfunded debt or floating debt. The unfunded debts are short term debts. Three purposes of Public debt:

Four factors that cause demand-pull Inflation:

(a) How does the Government use its instruments of taxation and public expenditure during inflation? Support your answer with reasons. [5] 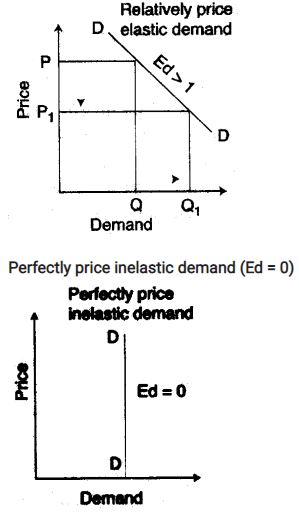 Elasticity of Demand useful to:

(a) Explain how the Commercial Banks provide credit facilities through the measures given below:
Cash Credit.
Discounting bills of exchange. [5]

(a) State three posited and two negative effects of privatization of banks in India. [5]

(b) Discuss the importance of capital in the modem system of production. [5]

(a) Three positive aspects of the privatization of commercial banks in India:

Two negative aspects-of the privatization of commercial banks in India.

(b) Capital is defined as “All those man-made goods which are used in further production of wealth.” Thus, capital is a man-made resource of production.

Two functions of capital are: