ICSE Economics 2015 Paper Solved Class-10 Previous Year Questions for practice so that student of class 10th ICSE can achieve their goals in next exam of council. Hence by better practice of Solved Question Paper of Previous Year including 2015 is very helpful for ICSE student.

(a) State any two factors that determine the Division of labour. [2]

(b) Mention two ways by which land differs from other factors of production. [2]

(c) Define an Indirect tax with the help of an example. [2]

(d) Which of the following is considered as labour in Economics? Give a reason to support your answer. [2]

(e) What is the significance of Capital in promoting economic growth?  [2]

(a) The two factors that determine the division of labour are:

(b) Land differs from other factors of production:

(c) “An indirect tax is a tax which is demanded from one person in the expectation and intention that he shall indemnify himself at the expense of another.” For example: Excise duty, custom duty, sales tax etc.

(a) What is meant by Cross elasticity of demand? [2]

(b) Mention any two factors that cause a rightward shift of the demand curve. [2]

(a) A change in the demand for one goods in response to a change in the price of another goods represents cross elasticity of demand.

(b) Two factors that cause a rightward shift of demand curve are as follows:

(c) Normal goods are those in case of which there is a positive relationship between income and quantity demanded.

Inferior goods are those in case of which there is negative (or inverse) relationship between income and quantity demanded.

(b) Direct taxes are progressive in nature. Briefly explain. [2]

(d) State any two demerits of the Barter system of exchange? [2]

(e) Mention two differences between the Central Bank and a Commercial Bank. [2]

(a) Creeping inflation: It occurs when there is a sustained rise in price at a very slow rate, say around 2 to 3 percent per year. It is also known as mild inflation.

(b) “Direct taxes are progressive in nature.” Taxes in which the rate of tax increases with the rise in tax payers income, are called progressive taxes. The amount of tax paid will increase at a higher rate than the increase in tax base or income.

(c) By ‘efficiency of labour’ we mean the productive capacity of a worker to do more or better work or both dining a specified period of time.

(d) The two demerits of Barter system of exchange are as follows:

(b) What is meant by Open market operations? [2]

How does it influence money supply?
(c) Mention two causes of Consumer Exploitation. [2]

(b) ‘Open Market Operations’ refers to the purchases or sales of government securities, public securities or trade bills etc: by the central bank in an open market.
In limits the power of commercial bank to create credit, so they will have to reduce their advances and loans. On the other hand, purchase of government securities by the central bank results in an increase in cash reserves of the commercial banks.

(d) (RTI) Right to Information Act, 2005 is a law enacted by the Parliament of India, giving citizens of India access to records of the central and state governments. It includes the right to:

(e) Fixed capital refers to these producer goods having long life which can be used again and again in productive processes. For example: machinery, plants and factory buildings, transport equipment etc.
Circulating capital includes all those items, which can be used for a specific purpose only once. Cotton and paper are such examples, which are used only once in productive processes of making cloth and printing of books respectively.

(a) Division of Labour—“The system of distributing a particular type of job to a particulars type of worker is known as specialization division of labour.”
Advantages/Benefits to Producers:

(b) Capital formation—“Formation of capital implies that society uses its present production not only for the satisfaction of its consumption but also uses a part of it on capital goods that is making machinery transport facilities or other production equipment.”
Three causes of low capital formation in a developing economy:

(a) Mention five qualities of a good entrepreneur. [5]

(b) Differentiate between Decrease in demand and Contraction of demand. [5]

(a) Five important qualities of an entrepreneur:

(b) Differentiate between decrease and Contraction of Demand 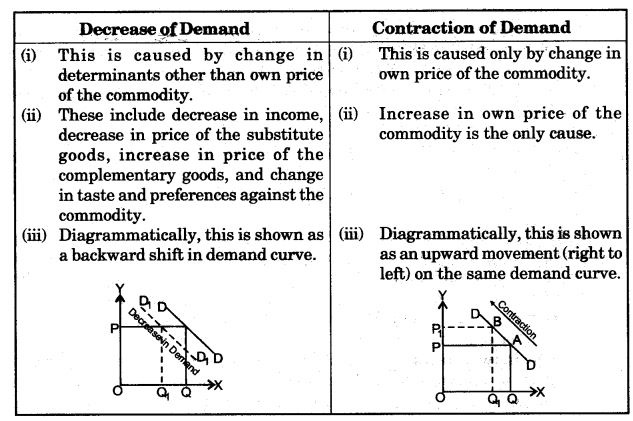 (a) What is meant by Shift in supply? Explain three determinants of a leftward shift of the supply curve. [5]

Three determinants of leftward shift the supply curve are as follows:

(a) What is meant by Public Expenditure? Explain three reasons for an increase in public expenditure in India. [5]

(b) Define a tax. Explain briefly three merits of a Direct tax. [5]

(b)  “Tax is a compulsory contribution from a person to the government to defray the expenses incurred in the common interest of all, without reference to social benefits incurred.”
Three Merits of a Direct Tax:

(a) Explain the secondary functions of money. [5]

(b) What is meant by Cost push inflation? Briefly explain three of its determinants. [5]

(a) Secondary functions of Money:

(a) With reference to the Central Bank, explain the following: [5]

(b) An alert consumer is a safe consumer.
Give reasons to support your answer. [5]

(b) A consumer should be aware of his rights and should discharge his responsibilities like a good citizen. Thus when he is alert he is always safe. To show his alertness, he must perform the following responsibilities: