(i) Give an example of a non contact force which is always of attractive nature.

(ii) How does the magnitude of this non contact force on the two bodies depend on the distance of separation between them? [2]

(i) Name one factor that affects the lateral displacement of light as it passes through a rectangular glass slab.

(ii) Rajan exerts a force of 150 N in pulling a cart at a constant speed of 10 m/s. Calculate the power exerted.

(d) A stone of mass ‘m’ is rotated in circular path with uniform speed by tying a strong string with the help of your hand. Answer the following questions.

(e) What do you understand by the following statements: [2]

A uniform metre scale is balanced at 60 cm mark, when weights of 5 gf and 40 gf are suspended at 10 cm mark and 80 cm mark respectively. Calculate the weight of the metre scale.

(b)  For which colour of white light, is the refractive index of a transparent medium (i) the least (ii) the most?

(c)  Which colour of light travels fastest in any medium except air?

(a) What do you understand by the term resonance ? Give two conditions for producing resonance

(b) What do you understand by the term quality of sound ?

(d) Arrange the α, β, or γ radiation in ascending order of their (i) ionizing powers, and (ii) penetrating powers.

(e) An atomic nucleus A is composed of 84 protons and 128 neutrons. The nucleus A emits an -particle and is transformed into a nucleus B. What is the composition of B?

The diagram in figure shows a radioactive source S placed in a thick lead walled container. The radiations given off are allowed to pass through a magnetic field. The magnetic field (shown as x) acts perpendicular to the plane of paper inwards. Arrows shows the paths of the radiation A, B and C. 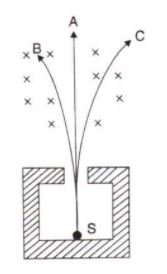 (i)Name the radiations labelled A, B and C.

(ii)Explain clearly how you used the diagram to arrive at the answer in part(i).

(i) Derive a relationship between SI and C.G.S. unit of work. [3]
(ii) A force acts on a body and displaces it by a distance S in a direction at an angle θ with the direction of force. What should be the value of θ to get the maximum positive work?

(c) Write the names of all the components of electromagnetic spectrum in the order of increasing frequency.

(i) Can the absolute refractive index of a medium be less than one ?
(ii) An observer stands at a certain distance away from a cliff and produces a loud sound. He hears the echo of the sound after 1.8s. Calculate the distance between the cliff and the observer if the velocity of sound in air is 340 ms. [3]

(i) Why does a bottle of soft drink cool faster when surrounded by ice cubes than by ice cold water, both at 0 °C ?
(ii) A certain amount of heat Q will warm lg of material X by 3 °C and 1 g of material Y by 4 °C. Which material has a higher specific heat capacity ? [3]

A pair of scissors is used to cut a piece of a cloth by keeping it at a distance 8.0 cm from its rivet and applying an effort of 10 kgf by fingers at a distance 2.0 cm from the rivet.

(a) Find: (i) the mechanical advantage of scissors and (ii) the load offered by the cloth.

(b) How does the pair of scissors act: as a force multiplier or as a speed multiplier?

(c) Give two reasons why the efficiency of a single movable pulley system is not 100%.

A man uses a crowbar of length 1.5 m to raise a load of 75kgf by putting a sharp edge below the bar at a distance 1 m from his hand.

(a) Draw a diagram of the arrangement showing the fulcrum (F), load (L) and effort (E) with their directions.

(b) State the kind of lever.

Radioactivity is a nuclear phenomenon’. Comment on this statement.

(c) A battery of emf 12V and internal resistance 2Ω is connected with two resistors A and B of resistance 4Ω and 6Ω respectively joined in series.

Find
(i) Current in the circuit.
(ii) The terminal voltage of the cell.
(iii) The potential difference across 6Ω Resistor.
(iv) Electrical energy spent per minute in 4Ω Resistor.

(a) Arrange α, β and γ rays in ascending order with respect to their:

(b) An object AB is placed between O and F1 on the principal axis of converging lens as shown in the diagram. 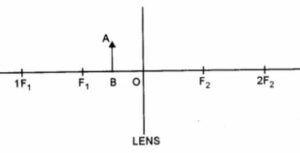 Copy the diagram and by using three standard rays starting from point A, obtain an image of the object AB.
(c) An object is placed at a distance of 12 cm from a convex lens of focal length. 8 cm. Find: [4]
(i) the position of the image
(ii) nature of the image

(i) The factors that affect the lateral displacement of a light as it passes through a rectangular glass slab are :

(i) At the centre of the ring
(ii) False

(d)
(i) Uniform speed.
(ii) Yes, the stone is moving with uniform acceleration.
Effect of accelerated motion is it makes the body move in circular path. Acceleration acts at right angle to the radius of circle.
(e)

(i) The least for red colour and (ii) the most for violet colour.

(c)  Red colour travels the fastest as its wavelength is the highest.

Resonance : “is a special case of forced vibrations. When the frequency of an externally applied periodic force on a body is equal to its natural frequency, the body readily begins to vibrate with an increased amplitude. This phenomenon is called resonance.”
Two conditions of resonance :

(b) Quality of sound : “The notes of different instruments having
the same frequencies and same loudness are distinguished by this characteristics.” It is because different waveforms are produced by different musical instruments. 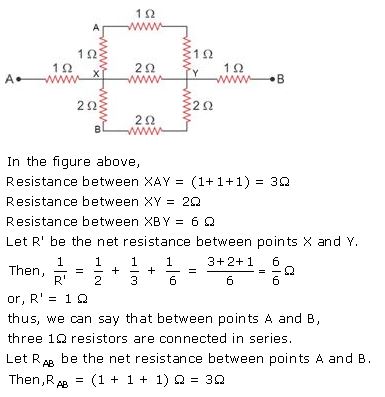 (ii) Radiation labeled A is gamma radiation because they have no charge and hence under action of magnetic field they go un deflected.

Radiation B is alpha radiation because its mass is large and it would be deflected less in comparison to beta radiation.

Q is the quantity of heat absorbed by a body, m is mass of the body, ?t is the rise in temperature and

Where Q is the heat energy required to bring about a temperature change of ΔT and C is the heat capacity of the system under study.

(i) This is done by polishing the inner and outer surface of the copper
calorimeter and the space between the copper vessel and the insulating container is filled with some poor conductor like wood wool or glass wool.
(ii) A, as it will gain less energy in a given time.

So material X has a higher specific heat capacity.

the pair of scissor act as speed multiplier because MA< 1

(i)The friction of the pulley bearing is not zero ,

(ii)The weight of the pulley and string is not zero. 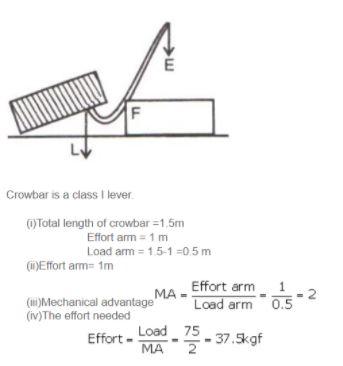 We know that heat energy needed to raise the temperature by 15o is = heat capacity x change in temperature.

This clearly shows that the phenomenon of radioactivity cannot be due to the orbital electrons which could easily be affected by such changes. The radioactivity should therefore be the property of the nucleus. Thus radioactivity is a nuclear phenomenon.

(b) The figure is as shown.