ISC Psychology Semester-2 Solved Specimen / Model / Sample Paper 2022 Class-12 for practice.  Step by step solutions of ISC Class-12 specimen model sample paper. During solutions of semester-2 Psychology specimen paper we explain with figure , graph, table whenever necessary so that student can achieve their goal in next upcoming exam of council .

(i) In the context of combating prejudice, ____________ is referred to as ‘resetting the boundaries between Us and Them’.

(ii) The level of stress in an individual that is motivating, healthy and improves performance is known as __________.

(iii) In which type of social influence do individuals change their attitude or behaviour to adhere to existing social norms?

(iv) Rafeeq does not want to remember the details of the traumatic incident of a robbery that took place when he was at home. He tries to push the memory
of this incident from his conscious mind to unconscious mind. Identify the defense mechanism used by him.

(v) Which one of the following is NOT the role of an Educational Psychologist in a School?

(a) Designing of curriculum

(vi) Which type of group is family an example of?

(a) show evidence of loss of contact with reality.

(b) are unhappy, withdrawn, and depressed.

(c) deviate from typical or average patterns of behaviour.

(d) are disabled by anxiety.

Answer : (c) deviate from typical or average patterns of behaviour.

Give the full form of DSM-IV. Briefly explain Axis – I.

(i) Briefly explain Realistic Conflict Theory in prejudice with an example.

(ii) Briefly explain any two techniques of persuasion that can be used to change people’s attitude.

(i) Realistic Conflict Theory (RCT) is a social model that attempts to explain why prejudice, negative stereotypes, and discrimination are developed towards members of other social groups. Socioeconomic status, ethnicity, and differing lifestyles are often examples of factors that separate people into different groups.

Geetha has an intensive irrational fear of lizards. During the therapy session, the therapist repeatedly exposes her to the object or situation that causes fear in her. Identify the disorder that Geetha is suffering from. Briefly explain the therapeutic technique used by the therapist.

Your friends are in Class XII and feel pressured by academics. Briefly discuss any two effective strategies to reduce their stress and enhance their well-being.

Briefly explain what is meant by leadership in an organisation.

Answer : Leadership is the ability of an individual or a group of individuals to influence and guide followers or other members of an organization. In business, individuals who exhibit these leadership qualities can ascend to executive management or C-level positions, such as CEO, CIO or president.

Briefly explain any two effects of stress on the health of an individual.

Explain how psychology can enhance efficiency, team building, recruitment and marketing in an organization. Give one point for each.

Study the image given below and answer the questions that follow: 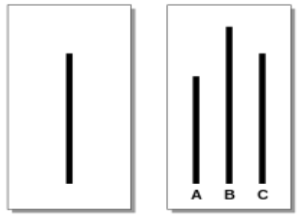 (i) Which classic experimental study has used the illustration given above?

(ii) What were the subjects asked to do in this experiment?

(iii) Briefly explain any two factors that influenced the result of this study.

Mrs. Sharma, a teacher in a local school sensed smoke coming into her classroom. She was startled and realised that something was wrong and immediately opened the windows and doors. She grabbed the fire extinguisher and guided her students to safety as per the evacuation plan.

(i) Identify the stage of General Adaptation Syndrome at which Mrs. Sharma was when she sensed the smoke.

(ii) According to the Cognitive Appraisal Model, what made Mrs. Sharma realise that something was wrong in the situation?

(iii) Name the last stage of General Adaptation Syndrome model of stress and briefly explain it.

(i) Give any two causes and any two symptoms of severe depression.

(ii) Give any two causes and any two symptoms of Obsessive-Compulsive Disorder.

(i) moving or talking more slowly. difficulty sleeping, early morning awakening, or oversleeping. appetite or weight changes. chronic physical pain with no clear cause that does not get better with treatment (headaches, aches or pains, digestive problems, cramps)

It’s a bit more common in women than in men. Symptoms often appear in teens or young adults.

OCD comes in many forms, but most cases fall into at least one of four general categories: