XCl2 is the chloride of a metal X. State the formula of the sulphate and the hydroxide of the metal X.
Answer An element X is trivalent. Write the balanced equation for the combustion of X in oxygen.
Answer:
Combustion of X3+ in oxygen means oxide of X

Answer:
Formula of nitride of metal X is XN
Since valency of nitrogen is 3-
∴ Valency of X is 3+

What is the valency of nitrogen in : 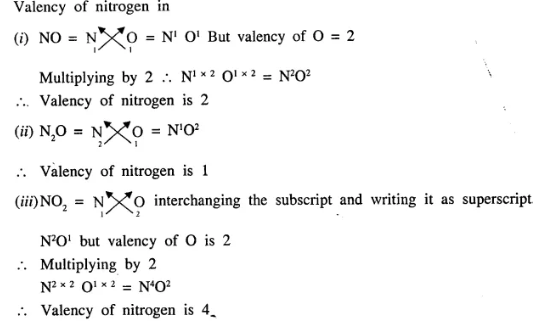 What is meant by the term ‘symbol’. Give the qualitative and quantitative meaning of the term ‘symbol’.
Answer:
Symbol : “Is the short form that stands for the atom of a specific element.”
Qualitative meaning : C is the symbol of atom of element carbon
S is the symbol of atom of element sulphur.
This means symbol stand for a specific element.
No two elements can have the same symbol.
Quantitative meaning : A symbol also represents quantity of the element i.e. atomic mass of element. Symbol C represents 12 g of carbon. In other words how many times that element is heavier than 1/12 th C12

Name three metals whose symbols are derived from :

(a) the first letter of the name of the element
(b) from their Latin names.

Explain the meaning of the term ‘valency’.
State why the valency of the metal potassium is +1 and of the non-metal chlorine is -1.
Answer:
Valency : “Is the combining capacity of atom or of a radical.” OR
“Valency is the number of electrons, which an atom can lose/gain/share during a chemical reaction.”
Metal potassium (K) has 1 electron in outer most shell which it loses and becomes K+ has valency [+1] whereas
Non-metal chlorine [Cl] has 7 electrons in valence shell and gains 1 electron and becomes [Cl–] has valency [-1]

What is meant by the term ‘variable valency’. Give a reason why silver exhibits a valency of +1 and +2.
Answer:
Variable valency : “Certain elements exhibit more than one valency and show variable valency.”
Reason : Why silver exhibits valency +1 and +2 Ag 47 [2, 8, 18, 18, 1] has 1 electron in the outermost shell when loses this electron shows [+1] valency but when penultimate shell has not attained stability and one more electron jumps to the outermost shell there by increasing valency electron and new configuration [2, 8, 18, 17, 2] loses two electrons and has valency [+2]
∴ Silver exhibits Ag1+ [ous] and Ag2+ [ic]

Give examples of eight metals which shows variable valency. State the valency of sulphur in : 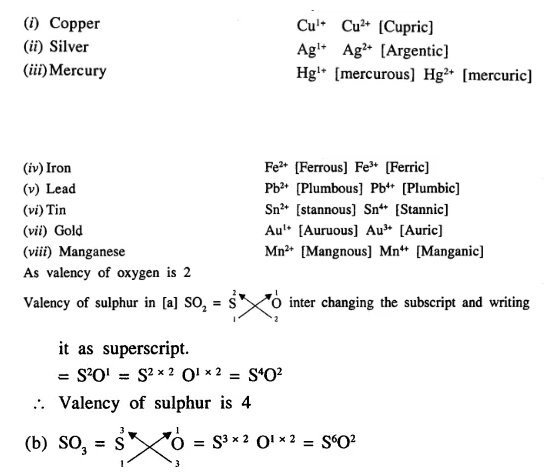 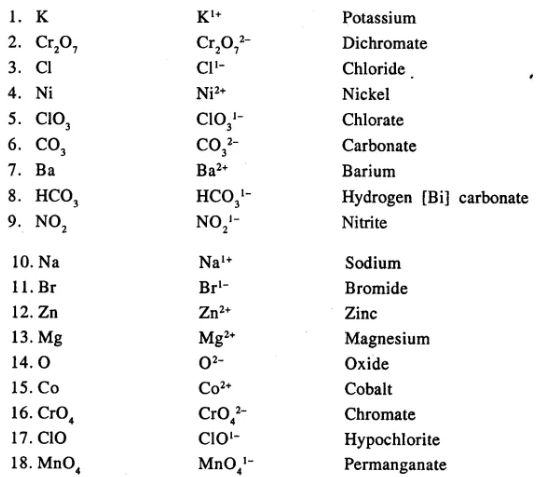 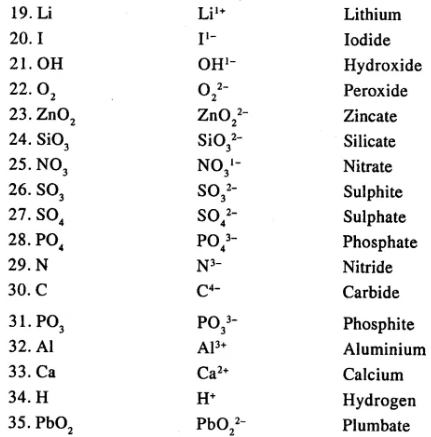 Explain the meaning of the term ‘compound’ with a suitable example. State the main characteristics of a compound with special reference to the compound iron [II] sulphide.
Answer:
Compound : “Is a pure substance made up of two or more elements combined chemically by in a fixed proportion.”
Example : CO2 carbon dioxide is made up of two elements carbon and oxygen C,
12 parts by weight and oxygen
2 × 16 = 32 parts by weight
i.e. in ratio C : O = 12 : 16 = 3 : 4 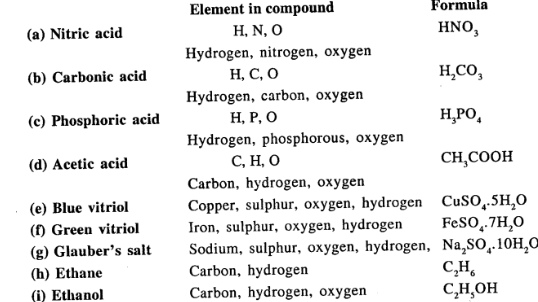 Write the formula of the following compounds : 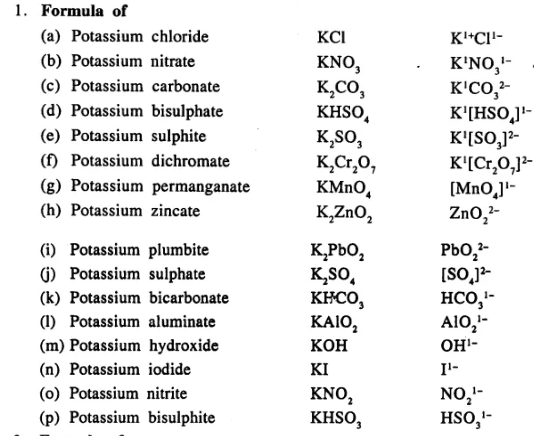 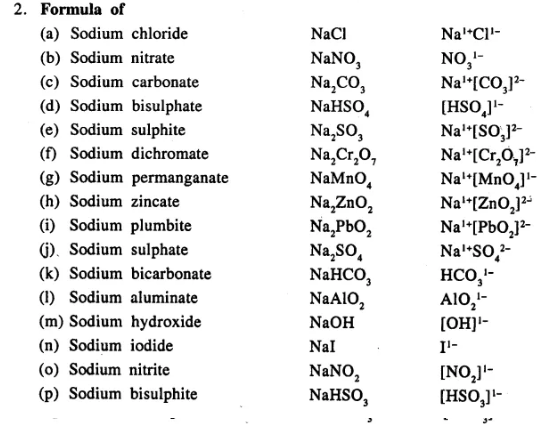 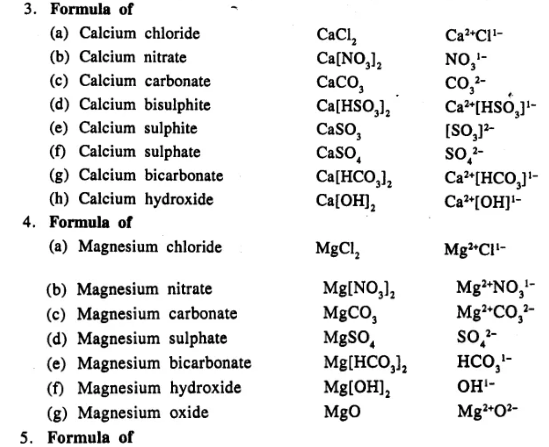 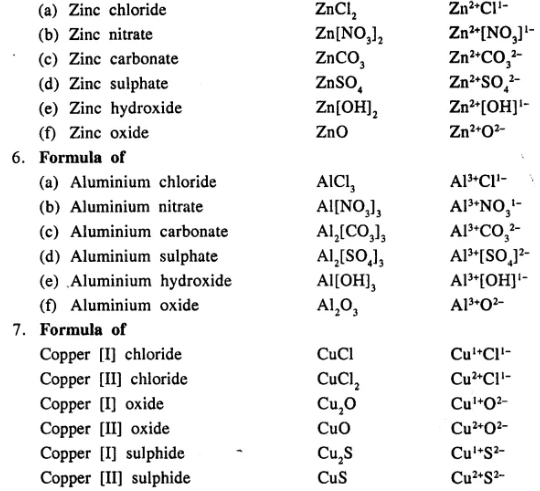 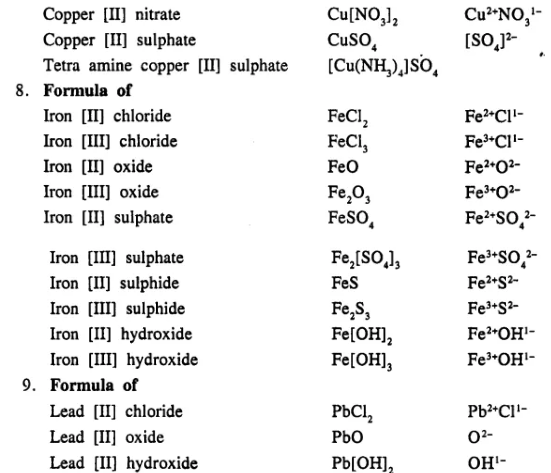 Write the names of the following compounds : 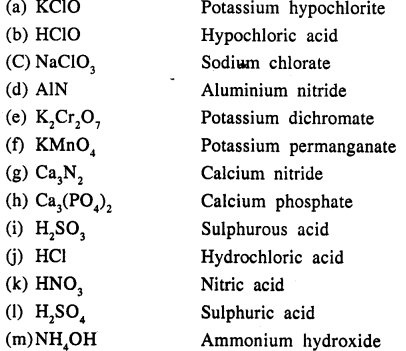 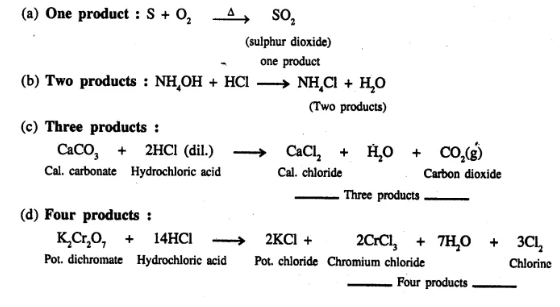 (a) State what is a ‘balanced equation’.
(b) Give a reason why the above equation is balanced.
(c) State why the compound MnO2 is written above the arrow.

What do the symbols ……

(a) Information provided by equation

(b) Information not conveyed are : 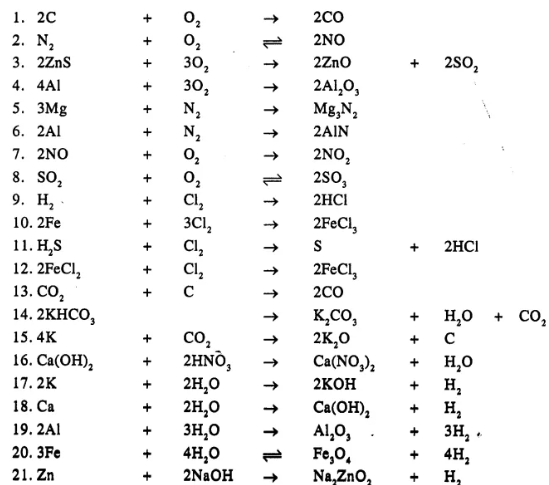 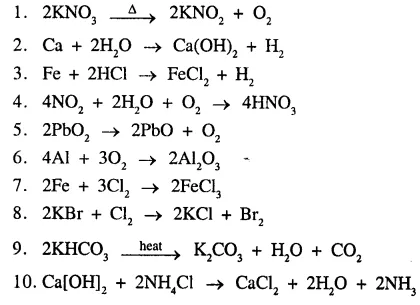 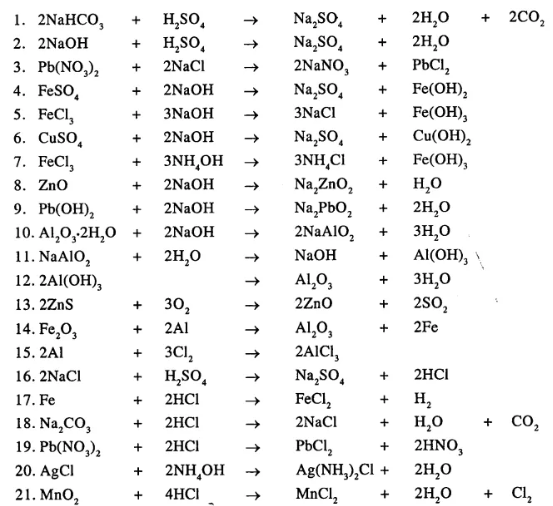 Give balanced equations for (1) & (2) by partial equation method, [steps are given below]
(1) Reaction of excess ammonia with chlorine – Ammonia as a reducing agent To determine the absolute mass of an atom indirect methods are utilised as Atom are extremely small and very light.
An isotope of carbon C12 [carbon -12 atom] has been assigned atomic mass of exactly 12 atomic mass unit] is used.

2. Calculate the percentage composition of 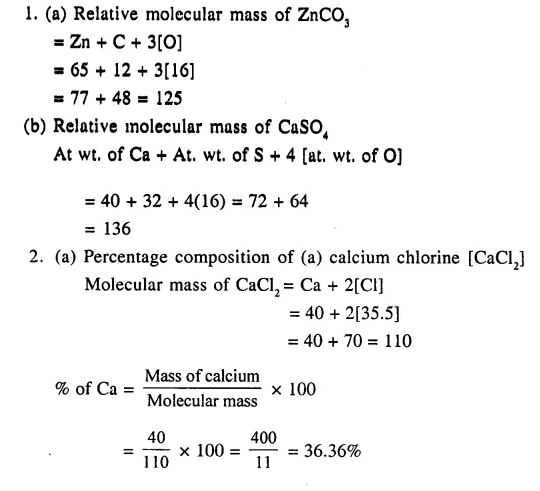 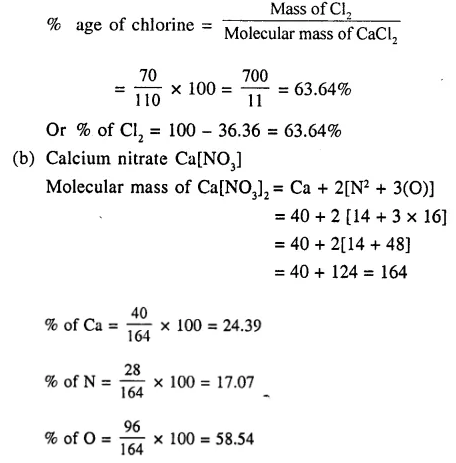 Match the names of ions and radicals from 1 to 10 with their correct answer from A to Q.

State which of the following formulas of compounds A to J are incorrect. incorrect write the correct formula.

Fill in the blanks with the correct word from the words in brackets :

Underline the compound in each equation given below, which is incorrectly balanced and write the correct balancing for the same. A : Information provided by a chemical equation.

1. The nature of the individual elements.
3. The state of matter in which the substance is present.
5. The direction of the reaction.

B : Limitations of a chemical equation

.– : End of Language of Chemistry Solutions :–