1. Write true or false for each statement.

(b) Poles of a magnet cannot be separated.
Answer. True

(c) A magnet can attract only a magnetic substance.
Answer. True

(a) Temporary magnets are usually made up of soft iron.
(b) Rough handling destroys the magnetic properties of a magnet.
(c) Like poles repel each other.
(d) A freely suspended magnet points in the north-south direction.
(e) In a magnet, ends have the maximum attractive property.
(f) A magnet has two poles. (a) If we suspend a magnet freely, it will settle in .

(b) Making a magnetic substance a magnet by bringing it closer to another magnet without touching it, is

(c) An example of natural magnet is

What is a magnet ?
Answer:
The substances which have the property of attracting iron, are called magnets.

The two ways of magnetizing an iron piece are:

Take a long iron nail and test it for magnetic properties by bringing near the magnetic substances. You will see nail does not attract the magnetic substances. Now bring near a pole of a bar magnet to the head of the nail. Now bring the iron paper clips near the pointed end of the nail, you will observe that the iron paper clips now get attracted towards the nail. This is because iron nail has become magnet. Now take the bar magnet away form the iron nail, paper clips fall off. This magnetism is temporary.

Take a demagnetised piece of iron. Place it on a table surface. Take a magnet and select its one pole. Now mb it with the selected pole on the iron in one direction for several times. After sometime, the iron piece turns into a magnet

How can magnetic properties of a magnet be destroyed ?
Answer: 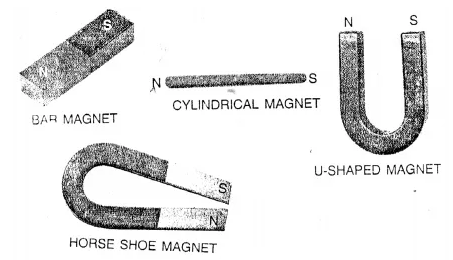 Describe an experiment to show that the maximum attractive property is at the poles of a magnet.
Answer:
Take a bar magnet and place a steel pin at some distance. We observe that nothing happens. Now, bring the steel pin near the pole of the bar magnet. We notice that pin sticks to the magnet. This experiment shows that maximum magnetic force acts at the poles of the magnet.

Describe the method by which an iron bar can be made a magnet.
Answer:
Single touch method : Place the iron bar (or the needle) AB on a table. Take a bar magnet NS and place it almost vertical with its north pole (N) on the end A of the bar.
Move the magnet along tire iron bar till the other end B is reached.

How are the magnets kept safely ? What is the role of keepers in storing the magnets ?
Answer:
When magnets are not in use they should be kept and stored in magnetic keepers. The magnetic keeper are the pieces of soft iron. A magnetic keeper has a card board with one or two iron soft pieces. Two magnets are placed in such a way that their opposite poles are close to each other and then a soft iron keeper is attached with it.

How will you make an iron bar electromagnet ? Draw a diagram showing the polarities of the electromagnet.
Answer:
Take the given iron bar AB. Wound several turns of insulated copper wire over the bar. Connect the ends of the wire to a battery through a switch. Press the switch to pass current. After some time, the bar AB becomes a magnet.

Suppose you are given a long bar magnet and you are asked to break it into four small magnets. Draw diagrams showing the polarities of each broken part.
Answer: State three important uses of a magnet.
Answer:
Use of magnet:

What is magnetic induction ? Explain with the help of a diagram.
Answer:
Magnetic Induction: The property by which an ordinary piece of iron acquires magnetic properties temporarily due to the pres¬ence of another magnet close to it, is known as magnetic induction
Take a long nail. Put it on the arm of a stand. Spread some iron pins on the base of stand. You will find that the pins do not get attracted towards the nail. Now touch a magnet at the end of nail. As the end is brought close to the head of nail, some pins cling to the nail. It happens because the nail turns into magnet and acquires the properties of magnetism. The moment you remove the magnet from the head of the nail. The pins will fall down. It will no more be a magnet. In which direction does a suspended bar magnet come to rest? Give reason.
Answer:
A magnet always rests in North and South direction, i.e. N-end always towards North of Earth and S-end towards South of Earth.

State three ways of demagnetization a magnet.
Answer:
A magnet can be demagnetized in the following ways

Name the material of core of an electromagnet for

Describe an experiment to illustrate that like poles repel while the unlike poles attract.
Answer: