Beating of heart and respiratory movement

Write one word in the space provided to complete the second pair of the related words pertaining to nervous system.
Memory: cerebrum:: breathing:
Balance: cerebellum:: reasoning:

(b) Name the three main parts of human brain.
Answer:

Given here is the diagram of a neuron. Name the parts numbered 1-6. 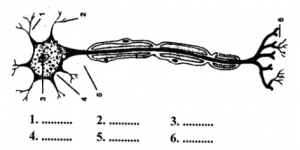 With the help of a suitable diagram describe the structure of a neuron.
Answer: Nervous system consists of special cells called nerve cells or neurons. It has a main cell body called cyton. It gives out many processes called dendrites. From it a very long process is given out. It is called axon or nerve fibre.

The cell body has a nucleus. The dendrites get the message from the organs and send this message to the axon through the cell body. Then the axon sends the message to muscles to contrast or to the gland for secretion.
The neurons make contact with one another through their processes. The axon at its end branches and meets the dendrites of another neuron. The meeting point is called synapse. The message is passed on from one axon to the dendrites of another neuron. How the message goes ? It is like this:
Organ → Message goes to dendrites →Cell body → Axon → Muscles or  glands

Briefly describe the structure of the cerebrum in human brain, and mention its functions.
Answer:
Brain consists of main three parts and lies in the cranial cavity of skull.

Structure of Cerebrum — It is very large and form two third of the whole brain. The two hemispheres are separated from each other by a deep longitudinal groove, the median fissure. The outer surface is folded with ridges and grooves. The hemispheres are hollow from inside and their walls have outer and inner portions. The outer portion has cell bodies of the neurons and it is called grey matter.

The wavery edges of the folded layer has large number of neurons to the extent of nine billion. The inner portion of the cerebrum has axons and it is called white matter.
Functions of Cerebrum

What are voluntary and involuntary actions ? Which part of the nervous system controls them ?
Answer:
Voluntary action: When an action is produced with the involvement of thoughts, they are called the voluntary action. For example, writing an article jumping from heights. These actions are produced consciously by our body.

II. Fill in the blanks:

1 . Basic structural unit of the nervous system is the…………

Basic structural unit of the nervous system is the neuron.

A neuron consists of cell body, dendrite and axon

4 .The neurons carrying impulses from the brain to the muscles are called …………..

The neurons carrying impulses from the brain to the muscles are called motor or efferent neurons.

The three main parts of the brain are cerebrum, cerebellum and medulla oblongata (brain stem).

III. State whether the following statements are true (T) or false (F):

Axon, cell body, dendrite, cerebellum
Ans. Cerebellum is the odd one out as it is a part of brain while rest three are parts of a neuron.

What are nerves? Mention the types of nerves found in humans.
Answer:
A bundle of nerve fibres joined together as a tubular sheath that transmits impulses between brain or spinal cord and other body parts is called a nerve. The nerves constitute the peripheral nervous system.
Nerves are of two types in humans:

Explain the structure of brain.
Answer:
The brain is the main control centre of the nervous system.
It is enclosed within the bony shell of cranium.
It consists ofthree main part: