Beating of heart and respiratory movement

(b) Balance of body is controlled by:

(c) The smell of good food causes watering of your mouth. It is a

(d) The structural and functional unit of nervous system is a

Your are driving your bicycle at a fast speed. Suddenly, a small boy comes in front of your cycle and, without wasting any time in thinking, you immediately apply the brakes and accident is avoided. What name is given to such an action?
Answer:
Reflex action (acquired).

Given below is the diagram of a neuron. Name the parts numbered 1-5.

Differentiate between the following pair of terms:
(a) Stimulus and impulse
(b) Receptor and effector
(c) Motor nerve and sensory nerve
Answer:

(a) Stimulus: Any change in the environment that usually results in change in the activity of the body.
Impulse: A wave of electrical disturbance that runs through the nerves.

(b) Receptor: The nerve cell on receiving the stimulus sets up the waves of impulses towards the central nervous system.
Effector: Any muscle or gland on receiving the impulse from the brain (or the spinal cord), contracts or secretes.

Give the function of each of the following:
(a) Olfactory nerve:
(b) Optic nerve:
(c) Facial nerve:

(b) Optic nerve: It carries the reflection of the object from the retina to the brain. The image formed on the retina is in a reverted position and the correct picture is formed in the brain as the object is. The optic nerves arise from the side of diencephalon. They innervate the retina of the eye and are sensory in nature.

(c) Facial nerve: It carries message and all expressions of the face, mastication work alone by the teeth, movement of the neck and the activities of the salivary glands to the brain. It arises from the side of medulla. On the whole facial nerves are mixed in nature.

With the help of a suitable diagram describe the structures of a neuron.
Answer:
Nervous system consists of special cells called nerve cells or neurons. It has a main cell body called cyton. It gives out many processes called dendrites. From it a very long process is given out. It is called axon or nerve fibre. 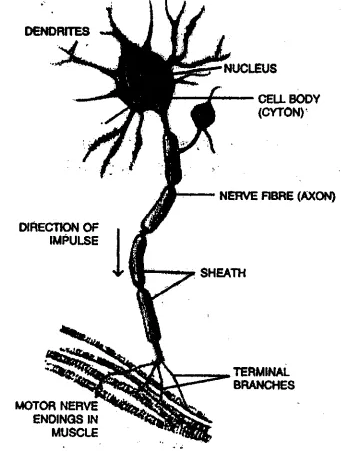 The cell body has a nucleus. The dendrites get the message from the organs and send this message to the axon through the cell body. Then the axon sends the message to muscles to contrast or to the gland for secretion.
The neurons make contact with one another through their processes. The axon at its end branches and meets the dendrites of another neuron. The meeting point is called synapse. The message is passed on from one axon to the dendrites of another neuron. How the message goes ? It is like this:
Organ → Message goes to dnedrites → Cell body → Axon → Muscles or glands

Briefly describe the structure of the cerebrum in human brain and mention its functions.
Answer:
Brain consists of main three parts and lies in the cranial cavity of skull.

Cerebrum: It is very large and form two third of the whole brain. The two hemispheres are separated from each other by a deep longitudinal groove, the median fissure. The outer surface is folded with ridges and grooves. The hemispheres are hollow from inside and their walls have outer and inner portions. The outer portion has cell bodies of the neurons and it is called grey matter.

The wavery edges of the folded layer has large number of neurons to the extent of nine billion. The inner portion of the cerebrum has axons and it is called white matter.

With the help of suitable example, describe reflex action.
Answer:
Reflex action: Reflex actions are automatic responses to stimuli. These actions are not under the control of the animal. They are of definite and mechanical type. Peripheral nervous system and spinal cord both control certain action and the brain is not in action.
Some examples of reflex actions are:

Differentiate between natural reflex and conditioned reflex. Give examples to illustrate your answer.
Answer:
Natural reflex: It is one in which no previous experience or learning is required. These reflexes are inborn i.e. inherited from the parents.
Examples are

Conditioned Reflex: It is one which develops during lifetime due to experience or learning.
Examples are: