Explain the ‘unique nature of carbon atom’ with specific reference and meaning to —
(a) ‘Tetravalency’ — leading to formation of single, double and triple bonds
(b) ‘Catenation’ — leading to formation of straight chain, branch chain and cyclic compounds.
Answer:
Some unique properties shown by carbon atom are :
(a) Tetravalency
(b) Catenation
(c) Ability to form multiple bonds.
(a) Tetravalency : Atomic number of carbon is 6. Its electronic configuration is 2, 4. Therefore, it has four electrons in its valence shell. Carbon atom can neither lose nor gain electrons to complete its octet (not possible from energy point of view). Therefore, carbon atom completes its octet by sharing four electrons with other atoms, i.e., it can form four covalent bonds, called its tetracovalency.
For example:

(b) Catenation: The property by virtue of which a large number of atoms of the same element get linked together through single or multiple covalent bonds, forming straight or branched chains and rings of different sizes, is called catenation. Carbon shows catenation to the maximum extent due to strong carbon-carbon bonds and its tetracovalency.

In this process of catenation, carbon atoms form straight or branched chains and cyclic rings of various sizes and can involve single, double or triple covalent bonds.

State reasons for ‘Justification of a separate branch’ for ‘Organic Chemistry.
Answer:
This is due to the following reasons: Explain the term ‘Homologous series’. State the general characteristics of members of the series with special reference to molecular mass or molecular formula.
Answer:
Homologous series is a series of organic compounds, that are grouped into a smaller number of series of compound. 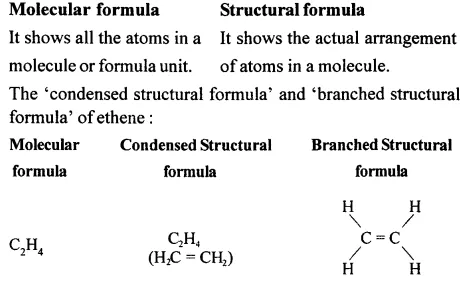 State what are ‘Alkyl groups ’. State the alkyl group of the parent alkane — methane and ethane.
Answer:
Alkyl Group : It is obtained by removing one hydrogen atom from a molecule of an alkane.
Methane : Methyl (Alkyl group)
Ethane : Ethyl (Alkyl group)

X = -F, -Cl, -Br, -I ; -C=O; -C-O-C
Answer:
Functional Groups : An atom, radical or bond which defines the structure of an organic compound and give if its characteristic properties 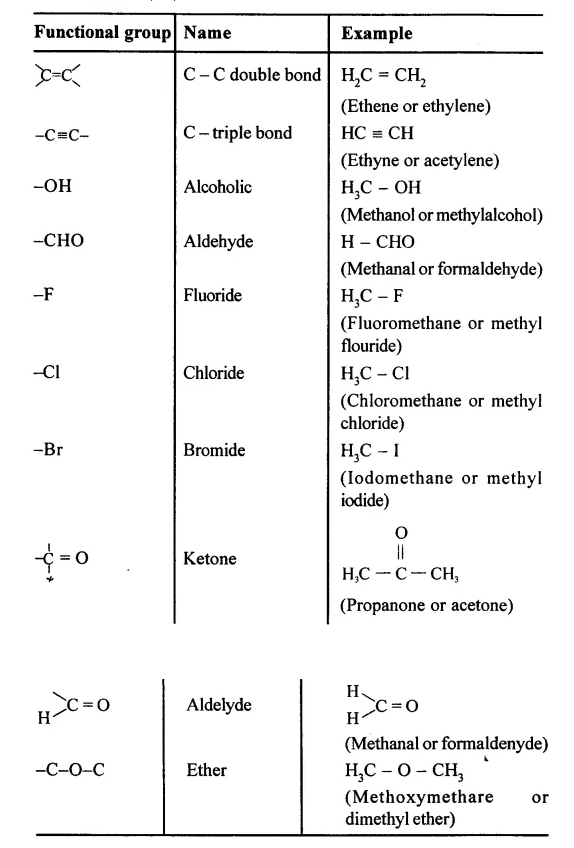 Explain the terms — ‘Isomers’ and ‘Isomerism’. State the ‘Characteristics of isomers’ with reference to —
Properties of isomers ; Number of isomers with relation to carbon atoms in the isomer.
Differentiate between — ‘Chain isomerism’ and ‘Position isomerism ’ – with suitable examples.
Answer:

Two or more compounds having the same molecular formula but different physical and chemical properties are called isomers and this phenomenon is known as isomerism.
Isomers have the same number of atoms of each element in them and the same atomic weight but differ in other properties. For example, there are two compounds with the molecular formula C2H6O. One is ethanol (ethyl alcohol), CH3CH2OH, a colorless liquid alcohol; the other is dimethyl ether, CH3OCH3, a colorless gaseous ether.
Alkanes with more than three carbon atoms form isomers. The various isomers differ in the framework of the carbon chains.

In the nomenclature of alkanes, the longest continuous chain if C-atoms is selected. For this, alkyl groups, if present, are written in the expanded form.
For example, Explain the term – ‘Hydrocarbons’. State the two main groups of hydrocarbons with examples. Draw a chart differentiating — ‘Alkanes, Alkenes andAlkynes’ — with respect to:

Hydrocarbons — They are aliphatic open chain organic compounds containing carbon and hydrogen only.
Molecular formula is CxHy where X and Y are whole numbers. 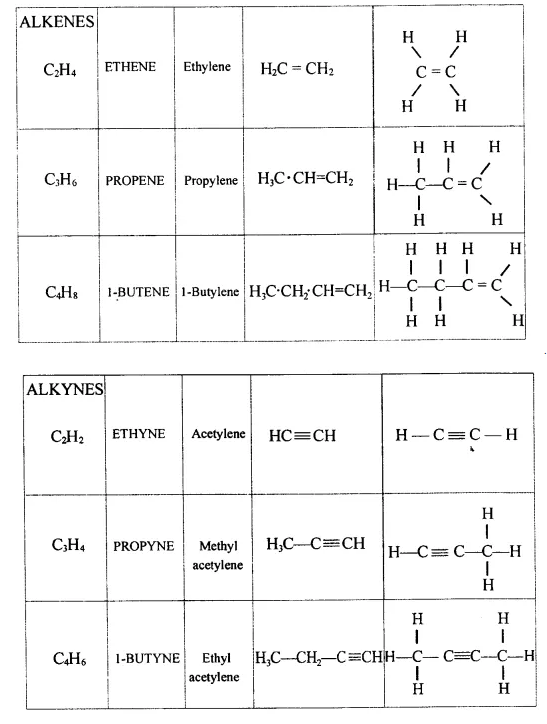 Draw the structural formula of each of the following : 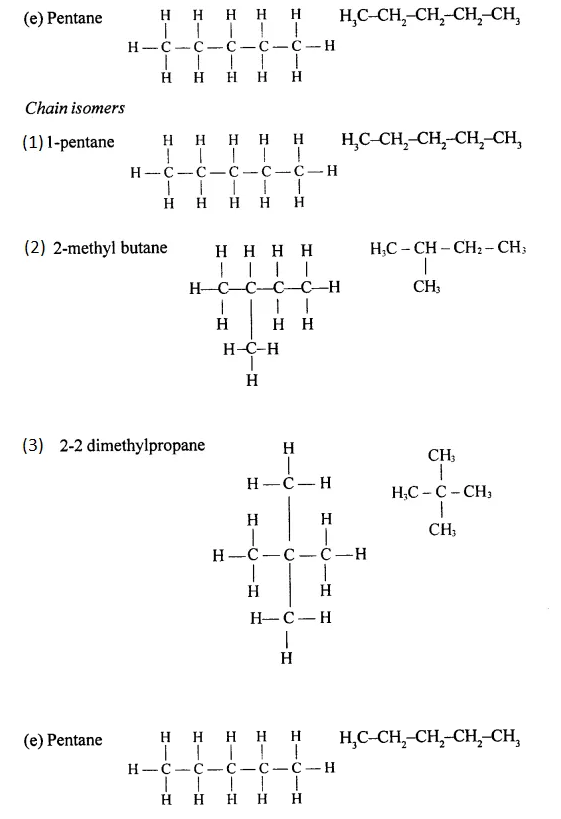 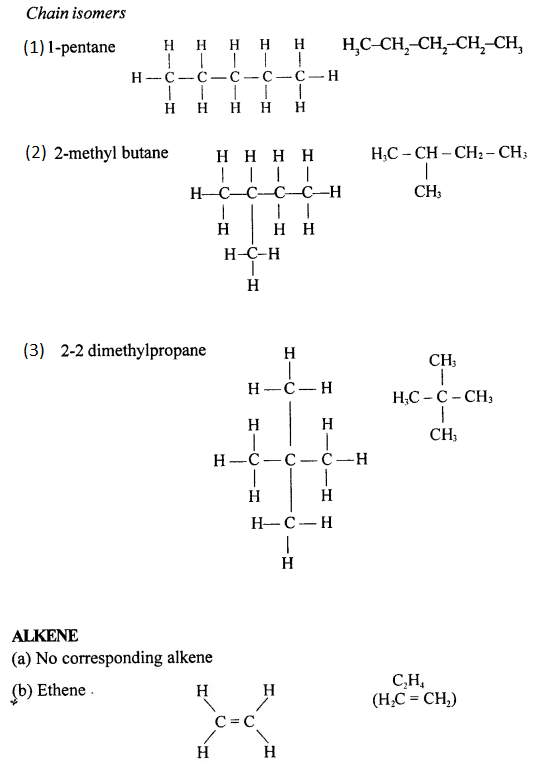 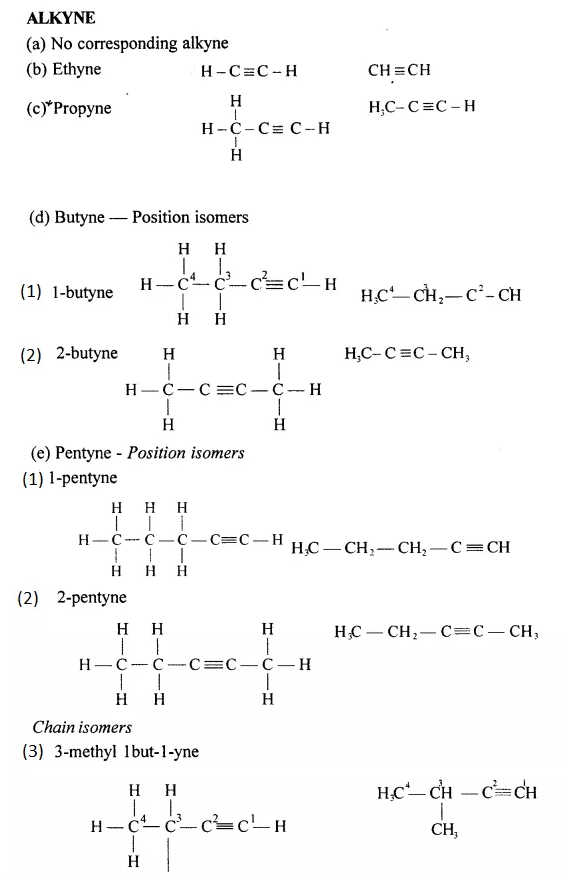 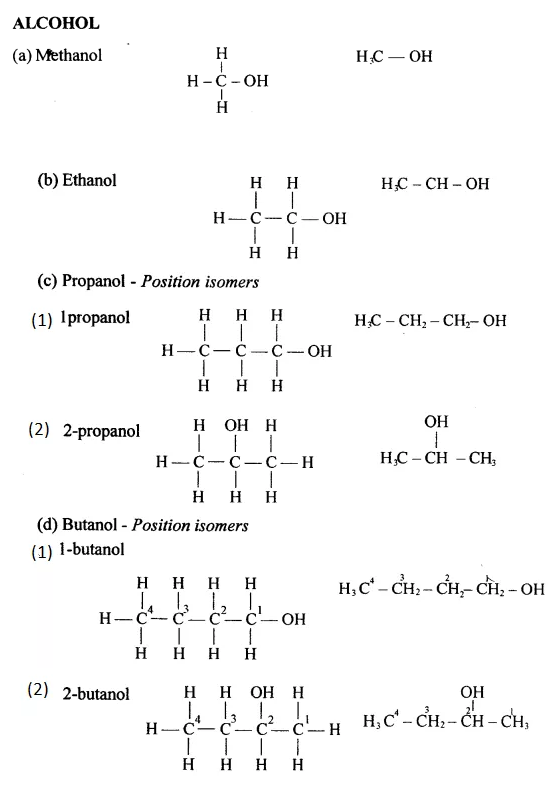 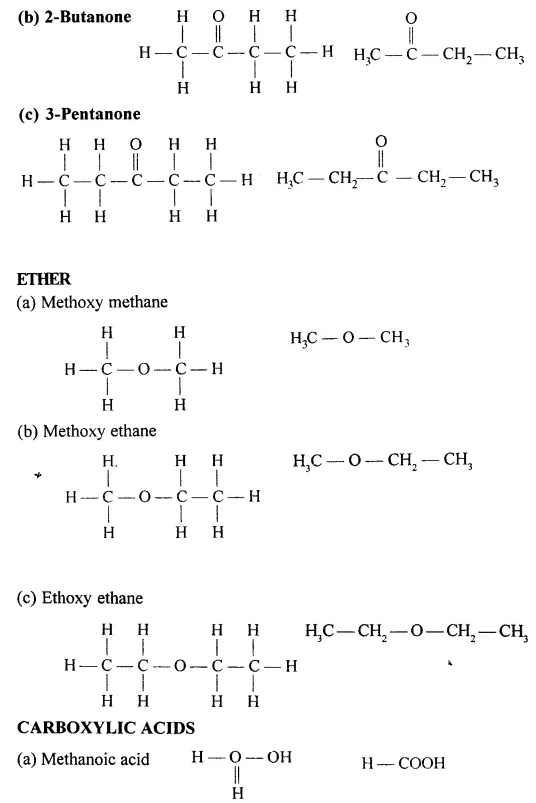 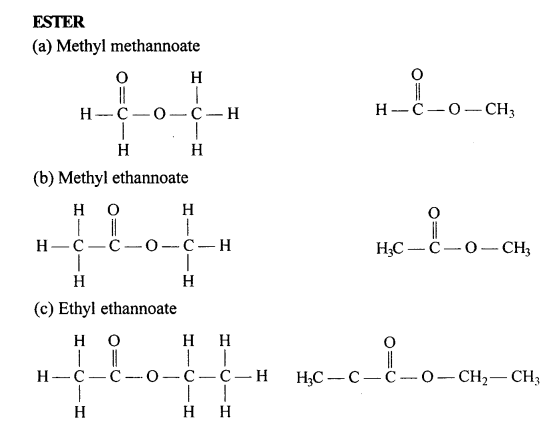 Give the IUPAC name of the compounds numbered (I) to (y). Give equations for the conversions of – Methane, Ethane, Ethene, Ethyne, Methanol, Ethanol and Ethanoic Acid. When methane is burnt in excess of air or oxygen with pale blue flame it gives carbon dioxide gas, water and heat energy. This reaction is complete oxidiation reaction. When methane is heated to about 1500°C in an electric arc and then suddenly cooled, the product is C2H2and Hydrogen.
Conversion of Ethane (C2H6) to
(a) Hexachloro ethane (C2Cl6) 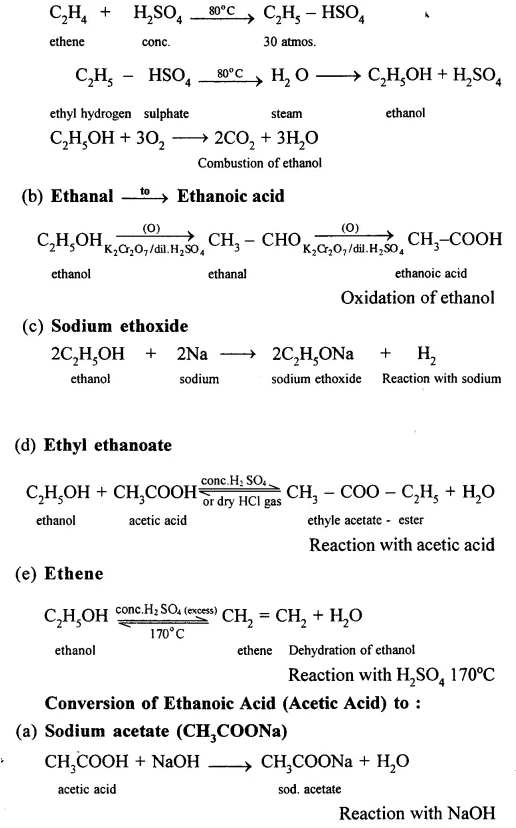 Ethyl alcohol containing pyridine or copper sulphate is termed – denaturated alcohol. It is used for – industrial applications only and hence made undrinkable.

It is known as condensation of an alcohol with an acid. Acetic acid on heating with an alcohol and dehydrating agent [cone. H2SO2] gives an ester – ethyl acetate.

Give a chemical test for to distinguish between

Give the main uses of –

(a) Illuminant and domestic fuel: In the form of natural gas or gobar gas. [Hydrocarbons – have high calorific value. They are easily combustible and the reaction is exothermic – releasing heat energy. Hence they are excellent fuels] (b) In manufacture of chemicals : Used as :

(a) Production of oxy-ethylene torch : For welding purposes and cutting metals.
(b) Ripening of green fruits : Artificial ripening and preservation of fruits.
(c) Catalytic hydrogenation: Used in hardening of oils.
(d) It is also used in manufacturing of :

(a) It is used for producing oxy-acetylene flame for welding and cutting purposes as it produces temperature as high as 3500°C.
(b) It is used as an illuminant in oxyacetylene lamp.
(c) It is used in the manufacture of solvent like westron (C2H2C14) and westrosol (CHCl = CC2).