(a) The testes are located within the:

(b) Amoeba is most commonly reproduced by:

(c) Identify the stage which is formed after the fertilisation of the egg by the sperm?

(d) Internally, the uterus opens into:

(e) Which one of the following represents the correct sequence in the life history of a butterfly ?

Budding: Budding is a process in which buds grow on the outside of the parent body. The buds detach themselves when they are large enough.
Example: Hydra
Regeneration: Regeneration is the process that uses cell division to regrow lost body parts.
Example: Starfish, sponges

(a) Fetilization: When sperms and eggs from the opposite partners (males and females) fuse to form Zygote. It is called fertilization.

(c) Puberty: Puberty is the period during which the reproductive systems of boys and girls mature. In girls, it starts at the age of about ten and the first sign of puberty is the development of breasts. In boys, it starts at about 11 years of age of the^enlargement of the testes is its first sign. Sudden spurt in growth, shoulder girdle grows more than hip girdle.

Why is it important that a very large number of sperms should be present in the semen ?
Answer:
Single ejaculation of semen has 20,000,000 to 40,000,000 sperms. But only 1 or 2 sperms go into oviduct and fertilise the egg to form the Zygote. It forms embryo that forms an individual. It is the sperm in the semen that are of importance, and therefore semen quality involves both sperm quantity and quality.

List the structures, in their correct sequence, through which the sperms must pass from the time they are produced in the testes to the time they leave the urethra.
Answer:
They are produced in testes. They pass as follows:
The testes consist of a mass of sperm producing tube. The tubes join to form ducts leading to the epididymis which in.turn leads into a muscular sperm duct. The two sperm ducts, one from each testes, open at the top of the urethra.

(a) Ovary: Ovaries produce ova (eggs) and secrete female sex hormones, oestrogen and progestrone.
(b) Testes: A pair of testes are present in human male. The testes produce sperms.

Given here is a section of the female reproductive system of human beings. (b) Fertilisation occurs in the upper part of the oviduct.Sperm fuses withthe egg and zygote is formed this is called fertilisation.

Given alongside is a diagram of male reproductive system in humans. Label the parts indicated by numbers 1 to 5, and state their functions. 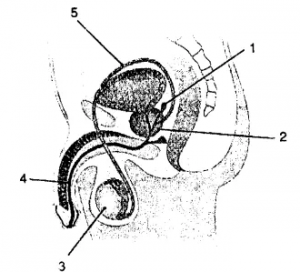 Define the term metamorphosis. Briefly describe the various stages occurring in the life-cycle of a butterfly.

A change in the form and often habits of an animal during normal development after embryonic stage complete transformation from an immature form to an adult form in two or more distinct stages.

The butterfly lays its eggs on the leaves of the plants. The new born that comes out of the egg is called larva. It passes through various stages of development. The larva of butterfly is also called Caterpillar. It is very active. and It is very voracious. and feeds and moves actively and gains size.

It stops moving and eating and called pupa. and It is a resting stage. The pupa spins thread around itself and thus is enclosed in a covering. It is called cocoon. This cocoon covers the pupa and is protective in function. During this stage it forms the features of an adult. After attaining adulthood the pupa comes out of the cocoon after breaking it as an adult butterfly. The wings of emerged butterfly are wrinkled and soft. After an hour these are fully stretched and it starts flying.

What is fertilization? Describe the process in human beings.
Answer:


Fertilization: The fusion of male (sperm) and female (ova) gamete is called fertlization.

As the male performs sexual act with the female and as a result of it the semen is deposited in the vagina of the female. Thus the semen has millions of sperms. Only a few of these sperms are able to reach the upper part of the oviduct. If there is an egg in the oviduct it is fertilized by the sperm. As sperm enters the egg and this leads to the formation of zygote, this act is called fertilisation.

During fusion only the head part of the sperm, which has nucleus, enters the egg. The tail is left behind. The nucleus of the sperm and egg fuse and form the zygote. Soon this zygote becomes many called embryo and reaches the uterus and implants on the wall of the uterus and forms the foetus. Baby develops with in the gestation period of 280 days. After this the baby is delivered.

How does a single called fertilized egg grows into an adult in human beings?
Answer:

Fertilised egg i.e., zygote divides and redivides and forms a ball of cells. This is a kind of embryo and it reaches the uterus and gets attached to the wall of the uterus. This fixing of embryo to the uterus is called implantation. Now the embryo undergoes a process “specialisation of cells’’. It leads to the formation of different parts of the body. This process is called differentiation. It leads to the formation of various tissues and other organs and thus organ systems are formed. Organ system lead to the formation of an individual. Thus the zygote forms an embryo, it forms a baby and it forms an adult.

Describe the human female reproductive system with a labelled diagram.
Answer:
On each side of the uterus two white oval bodies lie. These are called ovaries. Eggs are produced in the ovaries. Nearer to the ovaries there lies expanded funnel shaped oviducts or fallopian tubes. The eggs go into the oviducts when released by the ovaries. The two oviducts open into the uterus. The walls of the uterus are muscular. The growing embryo lodges to the wall of the uterus.

It is supplied by the food and blood through the placenta w hich is a connection betw een the growing embryo and the mother. The uterus joins the vagina. It is the vagina in which semen is lodged during sexual act. From here sperms go up into the oviduct and fertilise the egg. The urethra which brings urine from the urinary bladder opens into the.vulva just in front of the vaginal opening. 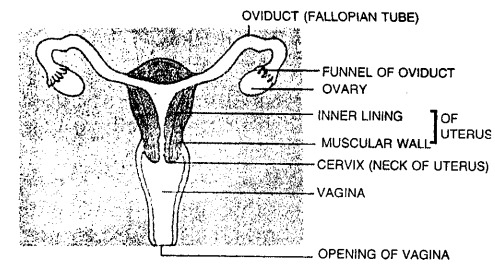 ‘Adolescence is a crucial stage’. Justify this statement.
Answer:
During adolescence physical and emotional changes takes place in the body of boys and girls. This is period between the age of 10 to 19 and this is very critical period. Boys bear facial hair, muscular body, hair in the arm pits and on the sex organs, and have hoarse voice.

The girls also have beautiful contours, raised breasts, wide lips and high pitch voice. The body increases in length in both cases. Boys and girls becomes conscious about the growth of the body. They become hesitant and shy to each other. They become body conscious and spend lot of time on dressing up and grooming. Hormonal level increases in their body and become restless. Hormones affect their brains and control their emotions and moods. They cherish the company of their own sexes and show the attraction for the opposite sex. Thus it is very strange and crucial stage in their life. So adolescence is a very crucial stage in the life of the boys and the girls.

— : end of  Reproduction in Humans  Solutions :–