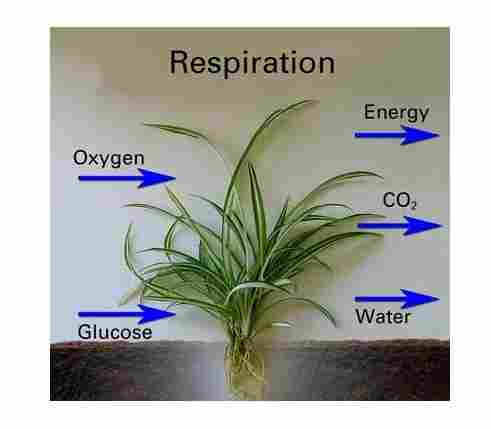 The solution contain All Type exercise question such as name the following, odd one, MCQs and figure based. Visit official Website CISCE  for detail information about ICSE Board Class-9.

Questions 1. Complete the following statements by choosing the correct alternative out of those given within brackets:

(ii) Respiration is controlled by …………….. (enzyme/catalyst/heat)

(iii) Respiration is a …………….. process. (physical/chemical/biochemical)

(iv) All food materials are converted into glucose, before they are used as a source of energy. T

(vi) Respiration occurs only in presence of light. F

Questions 3. Find the odd one out and give a reason for your answer :

Questions 4. Match the items in Column A with those in Column B:

Answer : a process in living organisms involving the production of energy, typically with the intake of oxygen and the release of carbon dioxide from the oxidation of complex organic substances.

Questions 6. List any two activities for which the energy released during respiration is used.

Answer : The energy produced during respiration is used in many different ways, some examples of what it is used for are: Working your muscles. Growth and repair of cells. Building larger molecules from smaller ones i.e. proteins from amino acids.

Questions 8. Give an example each of organisms in which alcoholic fermentation and lactic acid formation Occurs.

Questions 11. Give the overall chemical equations that shows

(i) aerobic respiration, and

Questions 12. What are the two stages of respiration in aerobes?

Questions 13. Which part of respiration is common to both aerobes and anaerobes? Where does it occur inside the cell?

Answer : The glycolysis pathway is common for both aerobes and anaerobes. In this process, glucose breaks down to form pyruvate in the cytoplasm of the cell.

Questions 14. What is glycolysis? Give a brief of this process.

Answer : Glycolysis is the process in which glucose is broken down to produce energy. It produces two molecules of pyruvate, ATP, NADH and water. The process takes place in the cytoplasm of a cell and does not require oxygen. It occurs in both aerobic and anaerobic organisms.

Answer : The Krebs cycle starts with pyruvic acid from glycolysis.Each small circle in the diagram represents one carbon atom. For example, citric acid is a six carbon molecule, and OAA (oxaloacetate) is a four carbon molecule. Follow what happens to the ca rbon atoms as the cycle proceeds.

Questions 16. What are lenticels? Where do they occur? Mention their role.

Answer : A lenticel is a porous tissue made up of vast intercellular gaps between cells. On stems and roots, lenticels appear as elevated circular, oval, or elongated patches. Lenticels allow gases to pass between the atmosphere and the organs’ interior tissues.

Questions 17. What are the means of gaseous exchange in plants?

Questions 18. Describe how you would show that a green plant respires.

Answer : Plants do breathe – they give out carbon dioxide and absorb oxygen from the air that surrounds them. Remember that a green plant respires all the time, day and night. A green plant photosynthesizes only in the presence of sunlight. All parts of the plant respire, the leaves, the stem, the roots and even the flowers.

Questions 19. Given below are two reactions.

(i) What processes are taking place in reactions (a) and (b)?

(ii) Where do these reactions take place? Name the organisms involved.

Hair Fall Before Age: Reason and Solution of Hair Fall–GK