(i) The structure where exchange of gases takes place in lungs.— alveoli

(ii) The respiratory tubes formed by the division of wind pipe before they enter the lungs.—bronchi

(iii) The air left in the lungs after expiration.—ERV

(iv) The volume of air normally inspired or expired in one breath.—-Tidal volume

(v) A disease which occurs in smokers.—chronic bronchitis

Question 2. Mention if the following statements are True or False. If false, rewrite them by changing the words printed in bold face:

(i) Left lung is bigger than right lung. False

(ii) Pharynx is the common passage for food and air. True

(iv) Tidal volume is equal to vital capacity of the lungs. False

(v) ERV is the maximum capacity of lungs for inhaling air. False

Question 3. Match the items in Column A with those in Column B:

Question 4. Complete the following statements by choosing the correct alternative out of those given within brackets:

(ii) The trachea is guarded by a cartilaginous flap which closes windpipe at the time of swallowing food. It is called ….epiglottis.…. (epiglottis / glottis / larynx)

(iv) The trachea has cartilaginous rings to prevent their collapsing. These rings are ….incomplete…. (complete /half/ incomplete)

(v) The exchange of air takes place between capillaries and ..alveoli... (alveoli/bronchi/trachea)

Question 5. Given below are sets of five terms each. Rewrite the terms in correct order in a logical sequence beginning with the term that is underlined.

(i) Direct respiration– It is the exchange of environmental oxygen with the carbon dioxide of the body cells without special respiratory organs and without the aid of blood. Example  Insects

(iii) Tidal volume– Tidal volume is the amount of air that moves in or out of the lungs with each respiratory cycle. It measures around 500 mL in an average healthy adult male and approximately 400 mL in a healthy female. It is a vital clinical parameter that allows for proper ventilation to take place.

(iv) Vital capacity— the greatest volume of air that can be expelled from the lungs after taking the deepest possible breath.

Question 8. What functions are performed by the ciliated mucous epithelium of the nasal chamber?

Answer : This type of epithelial lining also secretes mucus that coats the lining and helps with the mucociliary clearance of minute aerosolized particles that become trapped in the nasal mucosa. The nasal cavity also functions to facilitate drainage for the secretions from the adjacent paranasal sinuses

Question 9. Give the function of epiglottis.

Answer :  epiglottis is a leaf-shaped flap in the neck that prevents food and water from entering the windpipe and the lungs. It stays open during breathing, allowing air into the larynx.

Answer : The main function of the lungs is the process of gas exchange called respiration (or breathing). In respiration, oxygen from incoming air enters the blood, and carbon dioxide, a waste gas from the metabolism, leaves the blood. A reduced lung function means that the ability of lungs to exchange gases is reduced

Question 11. Describe the path of air from nostrils to lungs.

Answer : air travels down your pharynx (back of your throat), passes through your larynx (voice box) and into your trachea (windpipe). Your trachea is divided into two air passages called bronchial tubes. One bronchial tube leads to your left lung, the other to your right lung

Question 12. Explain the role of blood in respiration.

Answer : The blood transports oxygen from the lungs to the cells of the body, where it is needed for metabolism. The carbon dioxide produced during metabolism is carried back to the lungs by the blood, where it is then exhaled (breathed out)

Question 13. What effect does altitude have on breathing?

Answer : the reduced oxygen content of the blood induces breathing instability, with periods of deep and rapid breathing alternating with central apnea. This breathing pattern is called high-altitude periodic breathing (PB). It occurs even in healthy persons at altitudes above 6000 ft.

Question 14. What happens in lungs of people suffering from emphysema?

Answer : In people with emphysema, the air sacs in the lungs (alveoli) are damaged. Over time, the inner walls of the air sacs weaken and rupture — creating larger air spaces instead of many small ones. This reduces the surface area of the lungs and, in turn, the amount of oxygen that reaches your bloodstream 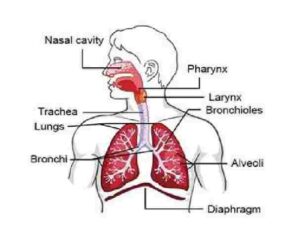 Question 16. The diagram given below represents an experimental setup for demonstrating certain aspects of the air breathed in/out. The two valves C and D help to regulate the direction of the flow of air. 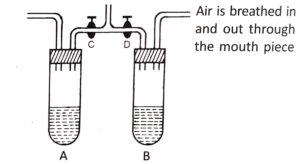 (i) There are mistakes at two places in the diagram. Redraw the diagram correctly to eliminate these mistakes.

(ii) What is the aim of the experiment?

Ans: CO2 is given out in respiration

(iv) what would be the observations after performing the experiment?

Question 17. Look at the given diagram and answer the following questions. 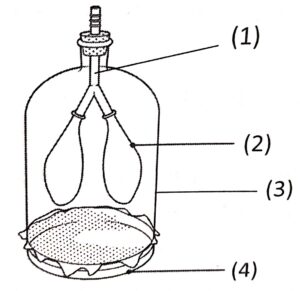 (ii) Give the aim of the experiment for which this set-up is used.