Answers to this Paper must be written on the paper provided separately.
You will not be allowed to write during the first 15 minutes.
This time is to be spent in reading the Question Paper.
The time given at the head of this paper is the time allowed for writing the answers.
Section I is compulsory. Attempt any four questions from Section II.
The intended marks for questions or parts of questions are given in brackets [ ].

(a) Choose the most appropriate answer.

Which of the following is a common characteristic of a covalent compound?
A High melting point.
B Conducts electricity when it is in the molten state.
C Consists of molecules.
D Always soluble in water.

Ammonium hydroxide will produce a reddish brown precipitate when added to
a solution of :
A CuSO4

The gas law which relates the volume of a gas to moles of the gas is:
A Avogadro’s Law
B Gay-Lussac’s Law
C Boyle’s Law
D Charle’s Law

Hydrogen chloride can be obtained by adding concentrated Sulphuric acid to:
A NaCl
B Na2SO4
C Na2CO3
D NaNO3

Formation of chloroform from methane and chlorine is an example of:

The element with the highest ionization potential in the periodic table is:
A He
B Ne
C Ar
D Xe

The equation for the action of heat on calcium nitrate is:

Name the organic compound prepared by each of the following reactions:
(i)CH3 COONa + NaOH →CaO

Identify the following substances:
(i) An acidic gas which gives dense white fumes with NH3

(ii) An alkane which can also be called a green house gas.

(iii) A solid which when kept in the open, forms a solution after sometime.
(iv) An alloy used in electrical fittings.
(v) A metal which gives hydrogen gas on reacting with both dilute acid and alkali.

Write the I.U.P.A.C. names of the following compounds: 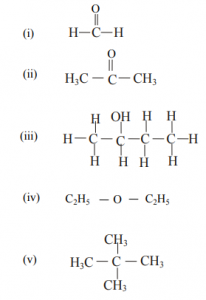 Attempt any four questions from this Section.

The following questions refer to the periodic table:
(i) Name the second last element of the period 3.

Write equations for:
(i) Preparation of ethanol by hydration of

Name the method by which following compounds can be prepared:
Select the appropriate method from the following list Neutralization; direct
combination; precipitation; metal + acid – use a method only once.
(i) Sodium sulphate
(ii) Silver chloride
(iii) Iron sulphide. [3]

How will you distinguish between following pairs of compounds using NH4OH

(i) Copper sulphate and iron(II) sulphate.

Name:
(i) A greenish yellow gas with pungent smell.
(ii) An oxide which is yellow when hot and white when cold.
(iii) A chemical used to deplete ozone layer.
(iv) A crystalline salt without water of crystallization. [4]

Name one:
(i) metal liquid at room temperature.
(ii) non-metal which is a conductor of electricity.
(iii) neutral oxide.
(iv) metallic oxide which cannot be reduced by hydrogen.
(v) non-metal which has lustre. [5] (b)

(a) Draw a neat and well labelled diagram for the silver plating on an iron
spoon. [3]

(b) Copy and complete the following table related to electrolysis.

(c) Classify the following as oxidation and reduction reaction, also complete the
reaction.

Give the electron dot structure of the following:
(i)NH3

Compare the properties of covalent and electrovalent compounds on the
following points:
(i) Solubility
(ii) Structure.