(b) Sound is a form of energy.
Answer. True.

(c) Sound can only be produced by vibrating bodies.
Answer. True.

(e) The frequency is measured in hertz.
Answer. True.

(a) Sound is produced when a body vibrates.
(b) The number of times a body vibrates in one second is called its frequency.
(c) The pitch of a sound depends on its frequency.
(d) Sound can travel in a medium solid, liquid or gas.
(e) We can hear sounds of frequency in the range of 20 Hz to 20,000 Hz.
(f) Sound requires a medium for propagation.
(g) Sound travels faster in solids than in liquids.
(h) The sound heard after reflection is echo.
(i) Sound produces sensation in ears amplitude
loudness
pitch
none of the above.

pitch
(b) We can hear sound of frequency

(e) Wavelength is measured in

(f) The speed of sound in water is

What is sound ?
Answer:
Sound is a form of energy which produces the sensation of hearing.

How is sound produced ?
Answer:
Sound is produced by vibrating bodies.

Describe an experiment to show that each source of sound is a vibrating body.
Answer:
Sound is produced when a body vibrates. In other words, each source of sound is a vibrating body. This can be demonstrated by the following experiment.
Take a ruler. Press its one end on the table with the left hand as shown in figure. Pull down the other end of the ruler with the right hand and then leave it.
You will notice that the ruler vibrates i.e., the ruler moves to and fro and a humming sound is heard.

After some time, the ruler stops vibrating. No sound is then heard.

After some time, the ruler stops vibrating. No sound is then heard.

Name two sources of sound.
Answer:
Each vibrating body is a source of sound. We, the human beings, produce sound when our vocal cords vibrate on blowing air through them by our lungs. Some animals like birds, frogs etc., also produce sound due to vibration of their vocal cords. But bees do not have the voice-boxes. They produce sound by moving their wings up and down very fast.

How do we produce sound ?
Answer:
Our throat has a larynx. The voice is produced in the larynx. Larynx is also called the voice box. It is designed to produce voice. It is a box like structure with walls of tough tissues. Inside two folds of the tissue, there is a gap. They are the vocal cords. When we breathe, the vocal cords become loose and the gap between them increases. When we talk, shout or sing, the cords become tight and hence they vibrate, thus produce sound. Given figure shows the part of the body which vibrates to produce sound.

Can sound travel through a vacuum ? Describe an experiment to explain your answer.
Answer:
Experiment — Arrange an electric bell, a glass bell jar, a vacuum pump, a battery and a switch as shown in the figure. When the circuit is closed by pressing the switch, the bell starts ringing and sound can be heard. Now remove the air from the jar with the help of vacuum pump. The loudness of the sound gradually decreases and a stage comes when no sound is heard. Sound requires a medium to travel but cannot travel in vacuum

Connect the bell to a battery through a switch. On pressing the switch, the bell starts ringing and a sound is heard. The sound reaches us through the air in the jar.
Now start the vacuum pump. It withdraws the air from the jar. You will notice that as the jar is evacuated, the sound becomes feeble and feeble. After some time when no air is left within the jar, no sound is heard. However, the hammer of the electric bell can be still seen striking the gong. The reason is that when no air is left in the jar, the sound does not reach us, although the bell is still ringing (or vibrating).
Thus, sound cannot travel through a vacuum.

Describe an experiment to show that sound can travel in water.
Answer:
Take a tub filled with water. Hold a bell in one hand and dip it in water. Keep one of your ears gently on the surface of water without letting water into the ear. Now ring the bell inside water. You will be able to hear the sound clearly. This shows that sound can travel through liquids.

Describe an experiment to show that sound can travel in a solid.
Answer:
Take two empty ice-cream cups. Make a small hole at the bottom of each cup and pass a long thread (about 20 m long) through them. Tie a knot or match-stick at each end of the thread so that the thread does not slip out through the holes. This makes a toy – telephone

Now use the toy-telephone as shown in figure and talk to your friend. You will be able to hear the sound of your friend. This shows that sound travels through the thread and reaches your ear. Thus, sound can travel through a solid.

Can two person hear each other on moon’s surface ? Give reason to support your answer.
Answer:
No, we cannot hear each other since sound requires medium for transmission. It cannot travel through vacuum.

(a) Amplitude (A) : The maximum displacement of a wave on either side of its mean position is called Amplitude. A = XY is amplitude.
(b) Time Period (T) : Time taken to complete one vibration is called Time Period, i.e. from A to B

(c) Frequency (f) or u
Number of oscillations made by a wave in one second is known as its frequency.

How does a musician playing on a flute change the pitch of sound produced by it ?
Answer:
In musical instruments like flute and clarinet, the pitch of sound is changed by changing the length of vibrating air column when different holes in it are closed.

How can the pitch of sound produced in a piano be changed ?

Answer:
In a piano, the string is struck to make the string vibrate and produce sound. The pitch of sound produced can be changed by stretching or loosening the strings of piano.

Write the approximate speed of sound in (i) air, (ii) water and (iii) steel.
Answer: 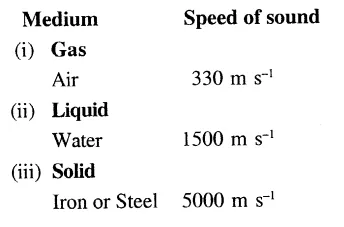 During a thunderstorm, the sound of a thunder is heard after the lightning is seen. Why ?
Answer:
The velocity of light is 3 × 108 m/s whereas velocity of sound is 332 m/s. First we see the flash of light and then we hear the thunder.

Describe an experiment to estimate the speed of sound in air.
Answer:

To estimate the speed of sound in air suppose we choose two  hills A and B about a kilometer apart. A person at the hill A fires  a gun. Another person at the hill B starts a stop watch as he sees the flash of the fire and stops it on hearing the sound. Thus, he measures the time interval between the seeing of flash and hearing of the sound. Let it be t second. Then measure the distance between the hills A and B. Let it be S metre.

Experimentally, it is found that the speed of sound in air is nearly 330 m s-1

megaphone), sound board and trumpet.

What is echo ?
Answer:
Echo is the sound heard after reflection from a rigid surface such as a cliff, a hillside, the wall of a building etc.

What minimum distance is required between the source of sound and the reflecting surface to hear an echo ? Give reason.

List the measures that you will take when designing a sound-proof room.
Answer:
In order to design such a sound proof room we take the following measures
(1) The roof of the enclosure must be covered by plaster of paris after putting the sheets of thermocol.
(2) The walls of the enclosure should be covered by the wooden strips.
(3) The floor must be laid down by thick carpets.
(4) The machine parts of all the electrical equipment such as fan, air conditioner etc. must be placed outside the enclosure.
(5) Thick curtains should be used to cover the doors and keep them closed.
(6) Thick stripping must be used to cover the openings of doors and windows.

A boy fires a gun and another boy at a distance of 1020 m hears the sound of firing the gun 3 s after seeing its smoke. Find the speed of sound.
Answer: