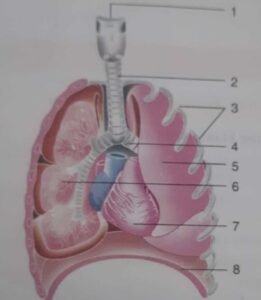 Q-1. How much energy is released in complete oxidation of one mole of glucose ?

Answer:- When 1 mol (180 g) of glucose reacts with oxygen under standard conditions, 686 kcal of energy is released. 38 ATP are synthesized in aerobic respiration

Answer:–Since Lactic acid is the end product of anaerobic respiration.

Q-3. Why do we feel fatigue after a strenuous exercise or after a long walk?

Answer:–It’s common to get tired after a long or tough workout. In general, this occurs because your muscles run out of energy. Your central nervous system also loses its ability to keep moving your muscles. This causes muscle fatigue, making you feel tired

Q-4. In which form is the energy released in respiration?

Answer:–During cellular respiration, glucose is broken down in the presence of oxygen to produce carbon dioxide and water. The energy released during the reaction is captured by the energy-carrying molecule ATP (adenosine triphosphate).

Q-1. What is the functional unit of lungs?

Answer:–The alveoli are the functional units of the lungs and they form the site of gaseous exchange.

Q- 2. Why is respiratory passage lined with ciliated epithelium?

Answer:–The conducting passageways of the respiratory system (nasal cavity, trachea, bronchi and bronchioles) are lined by pseudostratified columnar epithelial tissue, which is ciliated and which includes mucus-secreting goblet cells. .This epithelium is exceedingly thin to facilitate diffusion of oxygen and CO

Q-3. In which part of respiratory system is the air made moist and free of bacteria and dust.

Answer:–Cells in your trachea and bronchial tubes make mucus that keeps air passages moist and helps keep things like dust, bacteria and viruses, and allergy-causing things out of your lungs. Mucus can bring up things that reach deeper into your lungs. You then cough out or swallow them

Q-4. What is the opening of windpipe into pharynx called?

Answer:–The larynx, commonly called the voice box or glottis, is the passageway for air between the pharynx above and the trachea below.

Answer:–The epiglottis a small flap of tissue, covers the air-only passage when we swallow, keeping food and liquid from going into the lungs. At its bottom end, the trachea divides into left and right air tubes called bronchi (BRAHN-kye), which connect to the lungs.

Q-6. Which muscles help in increasing the volume of thoracic cavity?

Q-7. Where does exchange of gases occur in the lungs?

Q-8. What is the term applied for ventilation of lungs?

Answer:–The relaxation and contraction of the diaphragm and the movement of the costal muscles present in the thorax of an individual are responsible for the ventilation movements of the lungs that facilitate respiration.

Q-9. Which one is more: vital capacity or tidal volume?

Q-10. What do you mean by cellular respiration?

1. Fill in the blanks with suitable words:

(a) Carbon dioxide produced during respiration is removed by ………….

2. Give one or two words for the following :

(a) Muscles present in the diaphragm.

(b) The number of alveoli in both human lungs.

(c) The units of respiration.

(d) The membranes covering the lungs

(e) The membrane that lines the nasal passages and contains olfactory receptors.

(f) Number of cartilages in the larynx or voice box.

3. State whether the following statements are true or false.

(a) Pressure of air in the lungs decreases during expiration.

(b) Energy production in living beings is a step-wise process.

(c) Nasal passages are separated from buccal cavity by a bony palate.

(d) Voice box is the anterior dilated part of trachea.

(e) Tidal volume is the volume of air inhaled or exhaled during normal breathing.

(f) Hypoxia is the reduction in the availability of oxygen to the tissue cells due to retention of CO2.

(a) Why are hair present in the nostrils?

Ans- Nose hair is a natural part of the human body that serves as a defense system. Nasal hair keeps harmful debris out of the body system and maintains moisture in the air we breathe. Blood vessels in the nose and face are extra dense. In the nose, they support hair growth

(b) Which part of respiratory tube is supported with cartilaginous rings and why?

Ans-The cartilage rings are present in the trachea to prevent it from collapsing. This enables the lumen of the trachea to stay open during breathing

(c) In what ways is cellular respiration different from combustion?

Ans- Difference Between Respiration and Combustion

(d) How will you keep your lungs healthy?

Ans- Besides avoiding cigarettes, getting regular exercise is probably the most important thing you can do for the health of your lungs. Just as exercise keeps your body in shape, it keeps your lungs in shape too. When you exercise, your heart beats faster and your lungs work harder

(f) Why do trachea and bronchi not collapse when air is pushed out during expiration?

Ans-The trachea does not collapse even if the air pressure is less inside it. Because it has a series of cartilaginous rings which form a relatively rigid arrangement. The C – shaped cartilage rings are present till the trachea bifurcates into the bronchi. … This prevents it from collapsing due to pressure changes

(g) Discuss the role of epiglottis.

Ans-The epiglottis is a leaf-shaped flap in the throat that prevents food and water from entering the windpipe and the lungs. It stays open during breathing, allowing air into the larynx. … The epiglottis is also an important landmark for intubation.

Q-3. Differentiate between the following:

(a) Trachea and bronchiole

(b) Respiratory bronchiole and alveoli

Ans-our bronchioles are some of the smallest airways in your lungs. Inhaled air passes through tiny ducts from the bronchioles into elastic air sacs (alveoli). The alveoli are surrounded by the alveolar-capillary membrane, which normally prevents liquid in the capillaries from entering the air sacs.

Gas exchange takes place by diffusion in the alveoli within the lungs. As a result the composition of inhaled and exhaled air is different.

Q-1. How is inspiration and expiration of air brought about in man?

Ans:-Contraction and relaxation of the diaphragm and intercostals muscles (found between the ribs) cause most of the pressure changes that result in inspiration and expiration. These muscle movements and subsequent pressure changes cause air to either rush in or be forced out of the lungs

Q-2. Answer the following questions about exhaled air with the help of given table:

(a) Why has the oxygen content decreased in exhaled  air?

Ans- When the air reaches the lungs, some of this oxygen is transferred from the lungs to the blood, and is then transported throughout the body to be used for energy.  The result is that the exhaled air contains less oxygen and more carbon dioxide than the inhaled air

(b) Where has the extra carbon dioxide been produced?

Ans-There are both natural and human sources of carbon dioxide emissions. Natural sources include decomposition, ocean release and respiration. Human sources come from activities like cement production, deforestation as well as the burning of fossil fuels like coal, oil and natural gas.

(c) From where has the increased amount of water vapour come?

(d) Why is there no change in the percentage of nitrogen?

Ans:-Nitrogen has no role in our respiration. So there is no change in the percentage of nitrogen

Q-1. During respiration exchange of gases takes place in

(a) Trachea and larynx

(b) Alveoli of lungs

Answer: (b) Alveoli of lungs

Q-2. The blood leaving the tissues becomes richer in

Q-3. Lack of oxygen in muscles often leads to cramps among cricketers. This results due to

(a) Conversion of pyruvic acid to ethanol

(b) Conversion of pyruvic acid to glucose

The figure given below represents the organs of the human respiratory system.

(a) Label the structure indicated by number 1 to 8.

1. Larynx: The larynx also produces vocal sounds and prevents the passage of food and other foreign particles into the lower respiratory tracts.

5. Lungs: The lungs’ main role is to bring in air from the atmosphere and pass oxygen into the bloodstream.

7. Heart: It pumps blood throughout your body, controls your heart rate and maintains blood pressure.

8. Diaphragm: The diaphragm, located below the lungs, is the major muscle of respiration