Answer the following questions :
1. Name the types of cell divisions.

There are two types of cell division: mitosis and meiosis. Most of the time when people refer to “cell division,” they mean mitosis, the process of making new body cells. Meiosis is the type of cell division that creates egg and sperm cells

2. Which cells of human body do not divide after maturation?

Neurons, fat cells, skeletal and cardiac muscle cells, mature bone cells, retinal receptor cells, and most mature blood cells are the cells of human body which do not divide after maturation

3. Why was interphase named as resting phase?

Originally this phase of the cell cycle was called the “resting stage“, since light microscopy could not detect any activities taking place within the cells.

Karyokinesis: During cell division, the process of partition of a cell’s nucleus into the daughter cells. See also: Cytokinesis; Mitosis
5. During which phases of the cell cycle does each chromosome consist of two chromatids ?

Because each chromosome was duplicated during S phase, it now consists of two identical copies called sister chromatids that are attached at a common center point called the centromere

6. Give one difference between the cell division in a plant cell and an animal cell.

Cell division varies between animals and plants, but there are many steps in common. The differences have largely to do with specialized structures in each type of cell. Plants have both a cell membrane and a cell wall, whereas animal cells have no cell wall. Animals also have cell centrioles, but higher plants don’t

Whereas somatic cells undergo mitosis to proliferate, the germ cells undergo meiosis to produce haploid gametes (the sperm and the egg). The development of a new progeny organism is then initiated by the fusion of these gametes at fertilization

2. Give one basic difference between meiosis I and meiosis II.

Meiosis is the production of four genetically diverse haploid daughter cells from one diploid parent cell. In meiosis II, these chromosomes are further separated into sister chromatids. Meiosis I includes crossing over or recombination of genetic material between chromosome pairs, while meiosis II does not

3. What is the meaning of diploid chromosome number?

4. Why is the first meiotic division called reduction division?

The process of meiosis involves two divisions of the genetic material. The first division is called the reduction division – or meiosis I – because it reduces the number of chromosomes from 46 chromosomes or 2n to 23 chromosomes or n (n describes a single chromosome set

5. Gametes for sexual reproduction must be produced by meiosis. Why?

1. Give one word tor the following:
(a) Structure that initiates cell division.
(b) Chromosomes appear thread like.
(c) The type of cell divisive which Occurs in the cells of the reproductive organs.
(d) The stage of mitosis during which nuclear membrane and nucleolus reappears.
(e) A membrane that disappears during late prophase.

a) Structure that initiates cell division.–Nucleus
(b) Chromosomes appear thread like.- Chromatin fibre
(c) The type of cell divisive which Occurs in the cells of the reproductive organs-Meosis
(d) The stage of mitosis during which nuclear membrane and nucleolus reappears-Telophase
(e) A membrane that disappears during late prophase.-nuclear membrane

2. State whether the following statements are true or false.
If false, rewrite the correct form of statements.

(a) During cell divisions, cytoplasm divides first which is followed by nuclear division.
(b) Mitosis occur in reproductive cells.
(c) Crossing over takes place between chromatids.
(d) Cytokinesis is the division of cytoplasm.
(e) Meiosis occurs in the cells of root tip.
(f) In meiosis, the first meiotic division is the reduction division but the second division is simply mitosis.
(g) Mitosis is the type of cell division occurring in the cells of injured parts of the body.
(h) Resting stage in mitosis is called metaphase.

correct statement- During cell divisions, Nucleus divides first which is followed by cytoplasm.
(b) False

correct statement–  Crossing over involves the exchange of segments of DNA between homologous chromosomes during mitosis.
(d) true-Cytokinesis is the division of cytoplasm.
(e) false

Mitosis occurs in the cells of root tip.
(f) False

correct statement- In meiosis, the first meiotic division is the mitotic division but the second division is meiosis.
(g) true-Mitosis is the type of cell division occurring in the cells of injured parts of the body.
(h) false-Resting stage in mitosis is called interphase.
3. Match the columns.

4. Given below are sets of certain terms. Without changing the first term, rearrange the remaining terms so as to be in logical sequence as per the direction given in
brackets.

1. Give differences between the Following:

2. With reference to cell division, explain the following terms:

1. How does mitosis differ in animal and plant cells?

The most important and observable difference in the plant animal cells mitosis is the cytokinesis. In plants a new cell plate is formed between the daughter cells for the future cell wall, while in animal cells the cell membrane constricts to separates the parent cell into daughter cells

2. What is meant by cell cycle? Discuss its various stages.

Phases of the Cell Cycle

The cell cycle is a 4-stage process consisting of Gap 1 (G1), Synthesis, Gap 2 (G2) and mitosis. An active eukaryotic cell will undergo these steps as it grows and divides. After completing the cycle, the cell either starts the process again from G1 or exits the cycle through G0. From G0, the cell can undergo terminal differentiation.

The stages in the cell cycle between one mitosis and the next, which include G1, S and G2, are known collectively as the interphase.

3. Discuss the significance of mitosis and meiosis.

Mitosis and meiosis are both forms of division of the nucleus in eukaryotic cells. They share some similarities, but also exhibit distinct differences that lead to very different outcomes. The purpose of mitosis is cell regeneration, growth, and asexual reproduction,while the purpose of meiosis is the production of gametes for sexual reproduction. Mitosis is a single nuclear division that results in two nuclei that are usually partitioned into two new daughter cells. The nuclei resulting from a mitotic division are genetically identical to the original nucleus. They have the same number of sets of chromosomes, one set in the case of haploid cells and two sets in the case of diploid cells. In most plants and all animal species, it is typically diploid cells that undergo mitosis to form new diploid cells. In contrast, meiosis consists of two nuclear divisions resulting in four nuclei that are usually partitioned into four new haploid daughter cells. The nuclei resulting from meiosis are not genetically identical and they contain one chromosome set only. This is half the number of chromosome sets in the original cell, which is diploid.

1. The point where two sister chromatids of a chromosome are attached is known as
(a) Chiasmata
(b) Chromatid
(c) Chromomere
(d) Centromere

2. Which of the following is reduction division?
(a) Meiosis-I

1 Draw a diagram of the nucleus of a cell, having chromosome number 6, as it would appear in the Metaphase stage of Mitosis and label the following parts in the diagram.
(a) Aster
(b) Achromatic spindle
(c) Chromatid
(d) Centromere 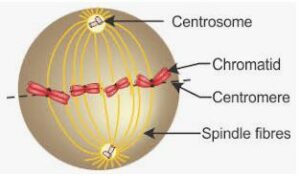 2 Given here is a a diagram representing a stage during mitotic cell division in an animal cell. 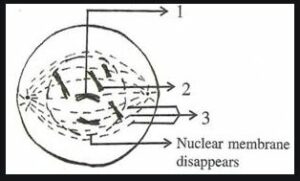 (a) Identify the stage. Give a reason to support your answer.
(b) Name the cell organelle that forms the aster.
(C) Name the parts labelled 1, 2 and 3.
(d) Name the stage that follows this stage of mitosis How can this stage be identified?
(e) Mention two points of difference between mitosis aa meiosis with regard to :
(i) the number of daughter cells formed
(ii)the chromosome number in the daughter cell.

(a) Late prophase. Because the nuclear membrane and nucleolus have disappeared.

(d) Metaphase. The centromeres of chromosomes are drawn to the equator by equal pull of two chromosomal spindle fibres that connects each centromere to the opposite poles, forming a metaphasic plate.

3. The diagram given below represents a stage in cell division. 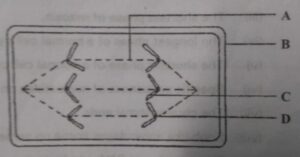 (a) Name the parts labelled 1, 2 and 3.
(b) Identify the above stage and give a reason to Support your answer.
(c) Mention where in the body this type of cell division Occur.
(d) Name the stage prior to this stage and draw a diagram to represent the Same stage during mitotic division

The stage described in the diagram is the late anaphase of mitosis in an animal cell. The stage can be identified by the presence of separated chromatids which are found at the two poles of the cell. The appearance of the furrow in the cell membrane classifies the stage as the late anaphase.

The division is mitotic division and this kind of cell division occurs in all the cells of the body except for the reproductive cells.

(d) The stage before anaphase is metaphase

5. The given diagram snows a Stage during mitotic Division in an animal cell: 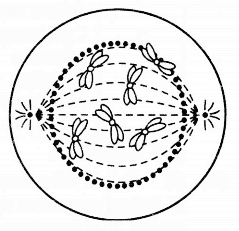 (a) Identify the stage. Give a reason to support your answer.
(b) Draws neat labeled diagram of the cell as it would appear in the next stage.
(C) In what two ways is mitotic division in an animal cell different from the mitotic division in a plant cell?
(d) Name the type of cell diV1s1on that occurs during :
(i) Growth of a shoot
(ii) Formation of Pollen grains.
Answer:

(i) Late prophase. The nuclear membrane and nucleolus disappear.

6. Study the diagram given below which represents a during the mitotic cell division and answer the ques that follow :

(a) Identity the stage giving suitable reasons.
(b) Name the parts numbered I and 2.
(c) What is the technical term for the division of nucleus?
(d) Mention the stage that comes before the stage shown in the diagram. Draw a neat labelled diagram of the stage mentioned.
(e) Which is the cell division that results in half the number of chromosomes in daughter cells?
Answer:-

(i) Telophase
(ii) 1 – Daughter chromosome, 2 – Nuclear membrane
(iii) Karyokinesis is the technical term for the division of a nucleus.
(iv) Anaphase

7. The diagram given alongside represents a stage during 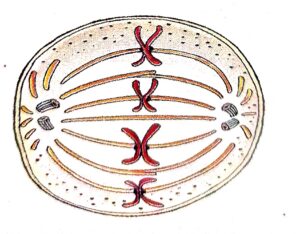 Study the same and answer the questions that follow:
(a) Identify whether it is a plant cell or an animal cell. Give a reason in support of your answer.
(b) Name the stage depicted in the diagram. What is the unique feature observed in this stage?
(c) Name the type of cell division that Occur during:
(i) Replacement of old leaves by new ones.
(ii) Formation of gametes.
(d) What is the stage that comes before the stage Show in the diagram?
(e) Draw a neat, labelled diagram of the stage mentioned in (d) above keeping the chromosome number Constant.
Answer

a) Animals cell. Because it lacks cell-wall.

b) Metaphase. Chromosomes lined up in one plane at the equator