(a) In a germinating seed, the roots develop from:
(i) Radicle
(ii) Plumule
(iii) Tegmen
(iv) Hilum

(b) In a germinating seed, the shoot develops from:
(i) Radicle
(ii) Plumule
(iii) Tegmen
(iv) Hilum

(c) Which one of the following is a monocotyledonous seed ?
(i) Bean
(ii) Pea
(iii) Maize
(iv) Gram

(d) If the cotyledons are pushed above the soil, then such type of germination is called :
(i) Epigeal
(ii) Hypogeal
(iii) Perigeal
(iv) Progeal

(e) If the cotyledons remain under the soil, then such seeds type of germination is called:
(i) Epigeal
(ii) Hypogeal
(iii) Perigeal
(iv) Progeal

(i) In a seed, food is generally stored in:
(i) Radicle
(ii) Plumule
(iii) Fruit
(iv) Catyledons or endosperms

1. Given below is a longitudinal section of a bean seed. Label the parts marked 1 to 5 and write their functions. 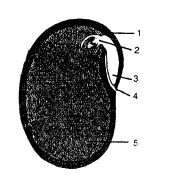 Ilium and micropyle.
Answer :
IlIum : On one side of seed câat, there is scar called hi hum, which marks the place where the seed was attached to the fiiüt wall.
Micropyle : Above the hilum is a small pore called micrope. The micropyle absorbs as much water as is required for germination

Testa and tegmen.
Answer :
Testa: The seed is protected by a thick outermost coat called the testa or seed coat.
Tegmen: Under the testa lies a very thin membrane called the tegmen. 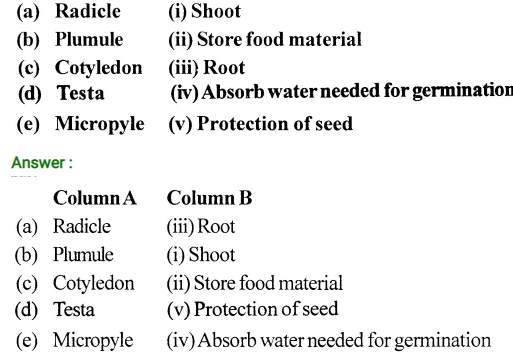 State whether the following statements are True or False.

State one function of the following:
(a) radicle
(b) cotyledons
(c) endosperm
(d) micropyle

Name the part of the seeds from which the following are given out:
(a) Roots : .
(b) Leaves :
Answer :
(a) Roots — Radicle give rise to roots.
(b) Leaves—Plumule gives rise to shoot bearing leaves

In the spaces provided below, draw labelled diagrams to show the three stages in the germination of any seed you have observed.
Answer : 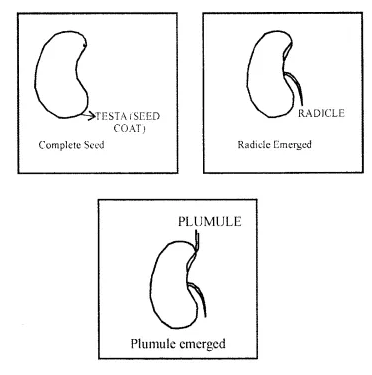 (Write the answers in your note-book)

What is a flower ? Draw a typical flower and label its different parts.
Answer : A flower is a reproductive part of a plant. It helps in sexual reproduction as it has male parts and female parts.
A fully opened flower has the following parts:
Stalk—A flower is attached to the shoot by means of stalk or pedicel stalk. The tip of the stalk is swollen or flattened. This is called toms or thalamus or receptacle.
The different parts of a flower are inserted on the thalamus. There are usually four whorls as Calyx

Petals form the second whorl inner to the sepals. These are usually coloured, gaudy, or white in colour and scented and give sweet smell. The value of a flower is due to the attractive colour of the petals. These attract the insects for pollination.

The third whorls inner to the petals are stamens. This third whorl is called Androecium. These are the male parts of the flower. Each stamen is formed of a long narrow, hair like structure called filament. On its tip it bears a rounded broad sac like structure called anther. Each anther has two anther lobes. Each anther lobe has two pollen sacs which have powdery mass called pollen grains.

Carpels are the inner most or fourth whorl in a flower. It is lodged on the thalamus and forms the female part of a flower. This whorl of carpels is called gynoecium. Each carpel or pistil has three parts,

With the help of a suitable labelled diagram, describe the structure of a dicot seed. 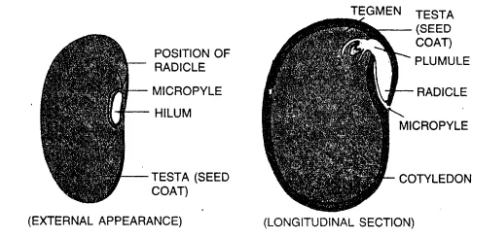 It is a dicotyledonous and non-endospermic seed. It is produced in a long cylindrical pod (fruit – phali) External characters. The seed is brown or whitish brown in colour. The seed is hard and smooth and kidney shaped i.e.. Convex on one side and concave on the other side. Concave side bears whitish scar called hilum. It is the place which is attached to the wall of the pod through a stalk called funicle. At one side of the hilum is a small pore called micropyle water enters through it.

The seed is covered by a hard, tough covering called testa. Inner to the tests is the embryo. Embryo consists of two cotyledons and embryo axis. Embryo axis has plumule and radicle.

The plumule is present in between the two cotyledons and its top bears two folded tiny leaves. It forms future shoot and leaves of the growing seed.

Define germination ? Name the two types of germination. Explain with examples.
Answer :
The growth and development of the embryo present in the seed into a seedling (or a young plant capable of independent existence) is called as seed germination.
The embryo in a seed remains inactive or dormant. When the seed is put into the soil and given water and under suitable temperature, the embryo becomes active on absorbing the water and the embryo turns into a seedling.

Hypo-below, gea soil.
When in a growing seed the cotyledons remain under the ground as in case of gram, pea, groundnut and maize. The plumule firms the aerial shoot to which bears leaves and the radicle gives rise to roots. The growing seedling gets food from the cotyledons. As the seedling grows the cotyledons die in the soil.

This is special type of germination.

This occurs in plants growing along the sea coasts and in salt lakes. The seed start growing while it is still attached to the plant as in mangrove plants. The embryo comes out of the fruit with a long, dart like radicle. It falls directly into soft, slushy, wet mud. The radicle gives root and establishes as a seedling and the plumule give rise to shoot. This is in mangrove plants.

Three seed experiment to demonstrate germination Three mature dried bean seeds are taken and tied on a wooden strip at three different positions (above the figure). This strip is placed in a beaker containing water in such a way that the lower seed is completely submerged in water, the middle seed is partially submerged inside the water and the top seed is kept above water. This set-up is left in a warm place for few days.
It is observed that the middle seed shows germination and gives out radicle and shoot leaves. The top seed shows no growth and the bottom one shows negligible growth.

The middle seed gets fully germinated due to the fact that this seed has all the favourable conditions required for germination i.e., air (oxygen), moisture and warmth (favourable temperature), which are necessary for germination.

Give the main difference between hypogeal and epigeal and germination.

Epi means above; geo-means ground (soil). When the cotyledons in a growing seed come out of the soil it is epigeal type of germination as in case of castor seed, bean seeds, pulses, tamarind cucumber.

The cotyledons come out of the soil and turn green these are cotyledonary leaves and carry on the function of photosynthesis till new leaves arise in the growing seedling.

Hypo-below, geo-soil it is that type of germination in which in the growing seed the cotyledons remain under the soil as in case of pea, gram, ground-nut, maize. The plumule forms the aerial shoot which later bears leaves and die radicle gives rise to root. The tiny seedling gets food from the cotyledons till it establishes itself in the soil by its roots and starts getting water and minerals and as well the new leaves arise on the ascending axis and they start making food by the process of food making.

State the location of the following in a flower:
Answer :

Petals form the second whorl inner to the sepals. These are usually coloured, gaudy, or white in colour and scented and give sweet smell. The value of a flower is due to the attractive colour of the petals. These attract the insects for pollination.

It is present at the end of a stamen. Anther has poller sacs in which pollen grains are formed. Pollen grains contain the male gametes.

It is the terminal knob-like part, it may be divided into two or more lobes and assume a feathery appearance. The stigma is covered with hair or with glandular papillae. It serves as the landing place grains for pollen during pollination.

Given below is the diagram of a typical flower. Label the parts marked by guidelines. 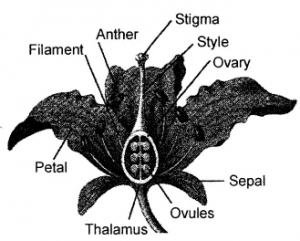 Give the difference in the function between the following parts:
(a) Ovary and ovule
(b) Petal and sepal
(c) Filament and style
(d) Pollen and ovule
Answer :

(b) petal and sepal—

Petals are colourful and attractive and helps to attract insects for pollination whereas the main function of sepals is to provide protection to the growing bud.

The function of pollen is to deliver male gametes (sperm) from stamen of a plant to an ovule whereas ovule, when fertilized, well developed into a seed. It is a female reproductive cell.