How does an increase in temperature affect :

Give reasons for the following :

(a) which contain of crystallization
(b) which does not contain.

What would you observe, when the water of crystallization of a salt Is removed by heating it.
Answer:
It will turn Amorphous in nature lose its Geometric shape, become powder.

What is meant by the term ‘oil spill’.
Answer:
Oil spill or Leaks : Oil is lighter and insoluble in water and oil layer floats on the surface of water and prevents oxygen transfer from atmosphere.
Oil leakage and petroleum products into sea water due to accidents of ships and oil tankers or leakage of pipe lines and storage tanks. They occur when oil is being produced from offshore well and may happen due to transportation by pipes and tanks, oil refineries, petrochemical plants etc.
Damage caused by oil spills :

(a) Industrial waste
(b) Sewage.

(a) Increase in chemical nutrients in an ecosystem.
(b) Organic matter in sewage poured into water bodies.

What is meant by the term ‘offshore drilling’. State the main environmental effects of offshore drilling.
Answer:
Offshore drilling : Involves exploring for oil and gas beneath the ocean floor. Steps involved are location of wells, exploring wells to find out if there is oil below and if oil and gas ‘production well’ is drilled and an ‘oil rig’ is built to replace the exploratory drilling rig.
Environmental effects : It affects the health and reproduction of marine animals. It interrupts the food chain, which may cause extinction of species.

Explain why oil spills have an adverse effect on marine life.
Answer:
Oil is lighter and insoluble in water and oil layer floats on the surface of water and prevents oxygen transfer from atmosphere.
Oil leakage and petroleum products into sea water due to accidents of ships and oil tankers or leakage of pipe lines and storage tanks. They occur when oil is being produced from offshore well and may happen due to transportation by pipes and tanks, oil refineries, petrochemical plants etc.
Damage caused by oil spills :

How does it occur in the free state and in the combined state.
Answer:
Water occurs in free state : In the form of ice, snow, frost
As – river water, lake water, sea water, spring water
As – water vapour, clouds, mist, fog
In combined state : In plants and animals, in hydrated salts i.e., MgCl2.6H2O and in certain minerals, milk, dry cereals and in green vegetables.

State a reason to prove that water is a compound and not a element.
Answer:
Three reasons are :

Define solubility. Give the main steps with the calculations involved of the method to determine the solubility of a given salt ‘X’ in water.
Answer:
Solubility : “The maximum amount of a SOLUTE which can be dissolved in 100 grams of a solvent at a specified temperature is called Solubility.
To Determine The Solubility Of ‘X’ In Water :
Steps :
(i) Preparation of saturated solution of ‘X’ 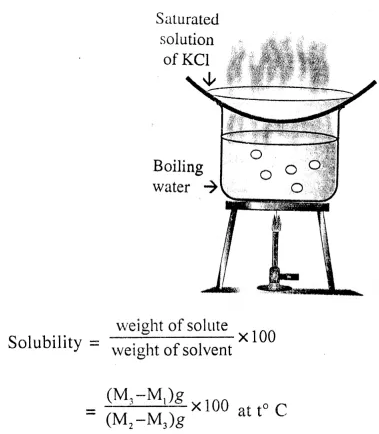 From the following list of salts : Na2SO4, 10H2O, NaCl, KClO3, NaNO3, Ca(OH)2, NH4Cl, KCI, CaSO4.
State the salts whose solubility (a) increases, (b) decreases, (c) is fairly independent or slightly increases – with rise in temperature of water.
Answer:

Two benefits of the solubility curve : 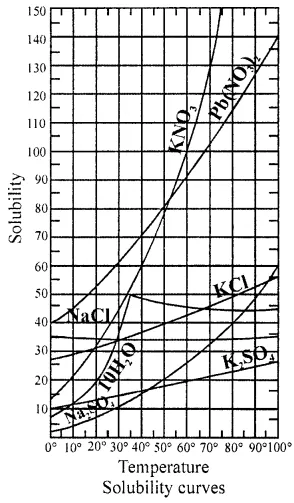 Give the influence of

Answer:
Influence on solubility of gases :

State the reasons why

Difference between hydrated and anhydrous crystals :

Washing soda and iron [III] chloride are separately exposed to the atmosphere. State

Would a similar phenomenon occur in case of exposure of common salt. Explain giving reasons.
Answer:
Observations When Exposed To Atmosphere :

(ii) Iron (III) Chloride (FeCl2)
Absorbs moisture from atmsophere dissolves in moisture changes to Liquid state
(iii) In case of washing soda — the phenomenon is Efflorescence.
In case of FeCl3 it is Deliquescence
No, in case of common salt (NaCl) no such phenomenon can occur as, it is Anhydrous salt and does not contain water of crystallization.
When common salt contains impurities of calcium or magnesium chloride dilquescent it absorbs moisture from atmosphere and become sticky and wet.

Why is fused calcium chloride and not potassium chloride kept in a desiccator?
Answer:
Fused Calcium Chloride (CaCl2) Is Deliquescent in nature, absorbs moisture and hence is used as Drying Agent in desiccator for drying other substances in the laboratory but KCl (potassium chloride) has no such property and cannot be used.

How does fused calcium chloride differ from iron [III] chloride when exposed to the atmosphere?
Answer:
Fused CaCl2 is Hygroscopic substance, absorbs moisture from atmosphere like FeCl3 but does not change its state. FeCl3 on absorbing moisture changes to Liquid State.

State the causes of hardness in water.
Answer:
Presence of salts of calcium and magnesium i.e. Ca(HCO3) or Mg(HCO3) or calcium or magnesium sulphate or chloride in water are the Causes Of Hardness Of Water.

State the cause of hardness in temporary & permanent hard water.
Answer:

Cause Of Hardness in Water :

State the disadvantages of hardness in water.
Answer:


Disadvantages of hardness in water :

Both temporary & permanent hardness in water can be removed by addition of washing soda. Give balanced equations for the same.
Answer: 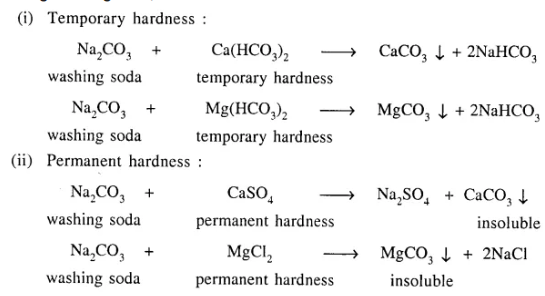 A sample of water is given in a trough. State how would you prove experimentally whether the given sample is hard water or soft water.
Answer:
On adding ordinary soap in the sample and shaking if this water gives lather easily it is soft water otherwise it is hard water.

Q.1. Select the correct word from the words in brackets to complete each sentence :

Q.2. Select the correct answer from the choice given in the brackets.

Q.3. Give reasons for the following (Water – Unit Test Paper 3)

Solubility curves find utility in separation and purification of solutes.
Answer:
Those fractions with very low solubilities will be the first to crystallise out from the solution and will be separated out.

Pressure and temperature influence the solubility of gases in water.
Answer:

Q.4. Name or state the following.

Q.5. Differentiate between the following :

(a) Is the ability of solute to dissolve in a particular solvent
(b) It is used to find the amount of solute required.

“absorb water or moisture from the atmosphere when exposed but donot change their state like deliquent salts.” e.g. Cone. H2SO4, quick lime CaO.

(a) It is the substance which is dissolved to form solution
(b) It is small in quantity.

(a) It is medium in which solute is dissolved
(b) It is large in quantity. 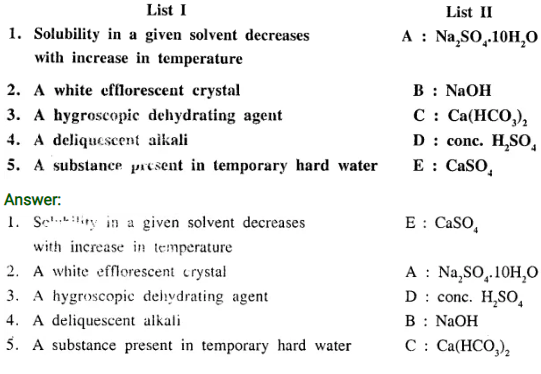