Define the following as per ionic theory with examples and ionic equations wherever relevant
(1) acid
(2) base
(3) alkali
(4) neutralization
Answer:
(1) Acid — An acid is a compound which when dissolved in water yields – hydronium ions (H3O+ ) as the only positively charged ion.

(3) Alkali — An alkali is a compound which when dissolved in water yields Hydroxyl ions (OH–) as they are negatively charged ions.

Alkali is a base soluble in water.

(4) Neutralization — | H+| ions of an acid completely or combine with |OH+| ions of a base to give salt and water only.

Differentiate between (1) strong and weak acid (2) strong and weak alkali with suitable examples and ionic equations.
Answer:
(1) Strong Acid – Is an acid which dissociates – almost completely in aqueous solution there by producing a – high concentration of hydrogen [H+] ions [or H3O+ions]
Examples: Hydrochloric, Sulphuric and Nitric acid.

Weak Acid – Is an acid which dissociates – only partially in a aqueous solution thereby producing a – low concentration of hydrogen [H+] ions [or H3O+ ions]. 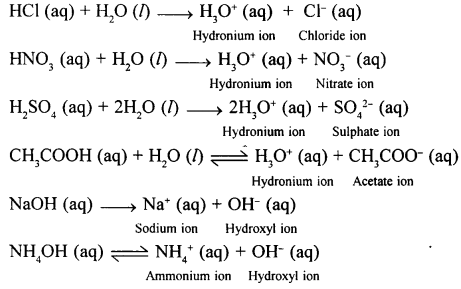 State why the basicity of acetic acid is one and acidity of calcium hydroxide is two.
Answer:
Basicity of an acid is the number of hydrogen ions which can be produced from one molecule of the acids on complete dissociation. Acetic acid, CH.COOH gives one H+ per molecule the acid, hence acetic acid is monobasic i.e., its basicity is one.

(1)
It ionises in aqueous solution to produce two hydrogen ions per molecule of the acid.

It contains two replace all hydrogen ions per molecule of the acid. 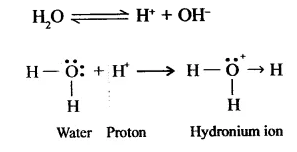 State how you would obtain: 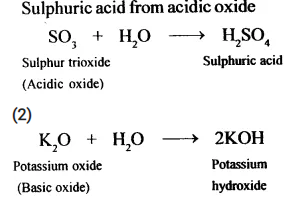 (a) Neutralisation: H+ ions react with OH ions from alkalies to give water

(b) Reaction with active metals: Active metals like Al, Zn, Fe, etc., react with dil. acids (HCl, H2SO4) to give hydrogen gas. In this reaction H+ is reduced to H, by the active metal. For example,

(a) Neutralisation: OH+ ions react with H+ ions from acids to give water.

(b) Reaction with solutions of metallic salts: Hydroxides of metals other than Group 1 and 2 are generally insoluble in water. Such hydroxides are precipitated from their respective salt solutions by OH” ions. For example,

Give equations for the decomposition of a metallic
(1) chloride
(2) nitrate with cone. H2SO4.
Answer:
(1) Reaction of cone. H2SO4 with metallic chloride: Convert
(1) NaHCO3
(2) Na2CO3 to unstable carbonic acid by action with dil. H2SO4.
State the reason why ammonia is evolved when an ammonium salt and alkali are heated.
Answer:

Ammonia is evolved when an ammonium salt and alkali are heated.

Define pH value. What would you say about the pH of a solution in which (i) H+ ions = OH– ions

State the colour change in a neutral litmus in presence of
(1) acidic
(2) alkaline medium.
Answer:
Neutral litmus is purple in colour

State the colour change in a universal indicator e.g. pH paper on

Define
(1) salt
(2) normal salt
(3) acid salt – with relevant examples and equations.
Answer:
(1) Salts: A salt is a compound formed by partial or complete replacement of the replaceable hydrogen ions of an acid by a metallic ion or ammonium ion.

(2) Normal salt: The salt formed by complete replacement of the replaceable hydrogen ions present in a molecule of the acid by metallic or ammonium ion. For example,

(3) Acid salt: The salt formed by partial replacement of the replaceable hydrogen ions present in a molecule of the acid by metallic or ammonium ion. For example,

State which of following salts is an – acid, normal or basic salt.

(1) Formation of a basic salt: A basic salt is formed by partial replacement of hydroxyl group of a diacidic or triacidic base with an acid radical (or an anion other than OH).

Give balanced equations for the preparation of the following salts –

Dissolve zinc oxide in minimum quantity of dil. HCl. Add to it a saturated solution ofNa2CO3 in water till
no more precipitation takes place. Filter and dry the ZnCO3 so obtained.

Give balanced equations for the action of a dilute acid on
(1) zinc carbonate,
(2) potassium bicarbonate for the preparation of the respective salt.
Answer:

Select the correct acid, base or salt from the list in bracket for each of the statements given below:

The salt which will not react with NH4OH solution [ZnCl2/CuCl2/NH4 Cl/FeCl2]
Answer:
NH4Cl

To distinguish soluble salts of zinc and lead, ……………….[NaOH/NH4OH] can be used.
Answer:
NaOH

Oxides and hydroxide of certain metals i.e………… (iron/ zinc/copper/aluminium/magnesium/Iead] are amphoteric and react with……………[acids/alkali/acids and alkalis]. 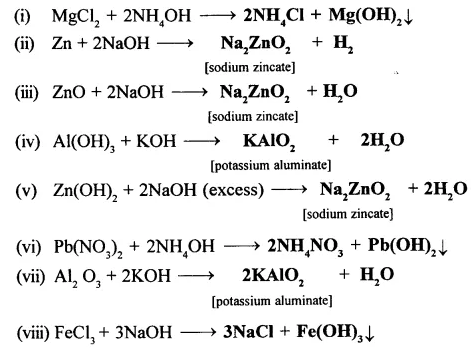