Answer the questions put against each of the following constituents of air :
(a) Nitrogen : Explain its significance for plants and animals.
(b) Oxygen : What is the percentage proportion of oxygen in air ? Why is oxygen called active air.
(c) Carbon dioxide : “Although carbon dioxide plays no role in respiration, all life would come to an end if there is no carbon dioxide in air.” Support this statement with relevant facts.
(d) Water vapours : Explain their role in modifying the earth’s climate.

(a) Plants convert nitrogen into protein. It is an important constituent of proteins, which are necessary for the growth of animals, plants and human beings. Plants convert nitrogen into proteins.
(b) 20.9%, oxygen is called active air because it supports life on earth. It is essential for the process of combustion.
(c) Carbon dioxide is essential for photosynthesis by which green plants prepare their food. It minimises heat loss by radiation. Thus, it balances the temperature on earth.
(d) Water vapour determine the earth’s climate conditions. It causes rain. It controls the rate of evaporation from the bodies of plants and animals.

(a) Pollutants : Air contains substances which are harmful to plants and animals. These harmful substances are called pollutants.
(b) Acid rain : When sulphur trioxide and nitrogen oxide present in the air mix with rainwater they form sulphuric acid and nitric acid respectively. Rainwater containing these acids is called acid rain.

(c) Global warming : An increase in the percentage of carbon dioxide, methane, nitrous oxide and chlorofluorocarbon traps the heat causing the temperature of the earth and its surroundings to rise. This is known as global warming.
(d) Smog : Oxides of nitrogen form a mixture of smoke and fog known as smog which affects our eyes too.

What is air pollution ? What are the harmful effects of sulphur dioxide, nitrogen dioxide and hydrogen sulphide present in the air ?
Answer:
Air Pollution : Air is polluted by natural processes like volcanic eruption, crop pollination, etc. mostly it is polluted by human activities like burning of coal, wood, diesel oil, kerosene, petrol etc.

Fossil fuels contain sulphur and nitrogen as impurities. When fuels bum these substances combine with air to produce gasses like sulphur dioxide, nitrogen oxide and hydrogen sulphide. They cause many serious respiratory problems. and They can destroy the ozone layer, which protects us from the ultra violet radiations of the Sun. so They also cause acid rain, which damages crops and buildings.

(a) What is nitrogen-fixation ?
(b) What are the two ways in which nitrogen fixation occurs?
(c) Explain the conversion of nitrogen into nitrates during lightning.
Answer:
(a) Nitrogen fixation : Symbiotic bacteria living in the root nodules of leguminous plants like peas, beans, absorb nitrogen directly from air and convert into nitrates. Thereafter, the plants convert it into proteins. Nitrogen is returned to the soil when plant and animal matter decays. This decomposition work is done by organisms called denitrifying bacteria which reconvert dead organic tissue into its constituent nitrogen.

(b) 1. Natural process.
2. Non-biological fixation.
(c) During lightning, temperatures often reach as high as 3000°C. At such high temperatures, nitrogen and oxygen present in the air combine to form nitric oxide, which further react with oxygen to form nitrogen dioxide Oxygen constitutes about 21% of air by volume. It is the active part of air.

Name :
(a) The most abundant element in the earth’s crust.
Ans. Oxygen.

(e) Two substances from which oxygen can be obtained at a large scale.
Ans. Air, water.

(a) Taking hydrogen peroxide, how would you prepare oxygen in the laboratory ?
(b) What is the role of manganese dioxide in the preparation of oxygen ?
(c) Write the balanced chemical equation for the above chemical reaction.

(d) Why is hydrogen peroxide preferred in the preparation of oxygen gas ?
(e) Why is oxygen collected by downward displacement of water ?
(f) What happens when a glowing splinter is introduced in a jar containing oxygen ?
(g) What happens when oxygen gas is passed through alkaline pyrogallol solution

(a) Take manganese dioxide in a round bottom flask and add hydrogen peroxide drop by drop to it, which acts ; a catalyst as shown in the figure. Collect oxygen by downward displacement of water. 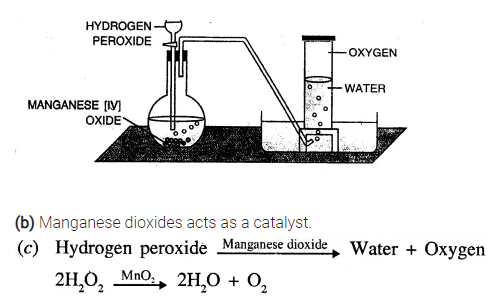 (d) H2O2 is preferred for lab preparation of oxygen because of following reasons.

(e) Since the water is displaced downward by the gas collecting in the jar, the process is called downward displacement of water. The reasons are :

(f) Introduction of glowing splinter in the jar. The glowing splinter rekindles, but the gas does not catch fire.
(g) Alkaline pyrogallol solution turns brown when oxygen is passed through it.

(a) What happens when

(b) Why is potassium chlorate not used for laboratory preparation of oxygen ?

Potassium chlorate needs heating for quite sometime (to a high temperature) before it decomposes.

What are oxides ? Give two examples for each of me – tallic and non-metallic oxides.

Answer:
Oxides are binary compounds formed by the chemical combination of a substance metal or a non-metal with oxygen.
Examples :
Metal:

Name the three types of oxidation processes. In which of these large amount of heat and light energy are produced?

Answer:
Oxidation can be categorized into three types :

Out of the above said three types, rapid oxidation produces large amount of heat and light energy.

What do you observe when the following substances are heated and then tested with moist blue and red litmus – paper?
(a) Sulphur
(b) Phosphorus
(b) Calcium
(d) Magnesium 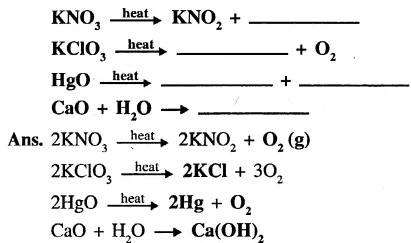 (a) Give four uses of oxygen.
(b) How is oxygen naturally renewed in air ?

Answer:
(a) Uses of oxygen

(b) All living beings use atmospheric oxygen in breathing and burning of fuels and in the formation of oxides of nitrogen. Yet amount of oxygen in the air remains more or less constant. This is because green plants return oxygen to the atmosphere by the process of photosynthesis.

(a) What is rust ?
(b) State at least two ways of prevent rusting.

(b) Two ways of prevention of rusting :

Answer:
Difference between rusting and burning

(a) Argon is the most abundant inert gas present in air.
(b) Oxides of sulphur and nitrogen combine with rain water to form sulphuric acid and nitric acid which cause acid rain.
(c) NO2 and CO are the most common air pollutants.
(d) Joseph Priestly discovered the oxygen gas.
(e) Oxygen occupies about 21% of air by volume. 1. A fuel when used releases least amount of pollutants in the air.
(a) sulphur dioxide
(b) chlorofluorocarbon
(c) smoke
(d) CNG

2. The natural way of adding oxygen to air which involves green plants is called
(a) photosynthesis
(b) respiration
(c) burning
(d) dissolution

3. Which one of the following is most likely to be corroded?
(a) a stainless steel cup-board
(b) a galvanised iron bucket
(c) an iron hammer
(d) a tin plated iron box

4. The process by which oxidation of food in our body takes place is
(a) photosynthesis
(b) respiration
(c) decomposition
(d) combustion