From the symbol 4/2 He for the element helium, write down the mass number and the atomic number of the element.
Answer:

Give a simple diagram to show the arrangement of the electrons in an atom of sulphur.
Answer:
In sulphur atom.
Number of electrons = P = e = 16

2412Mg and 2612Mg are symbols of two isotopes of magnesium. Compare the ‘ atoms of these isotopes with respect to : Chlorine is an element of atomic number 17. It is a mixture of two isotopes having mass number of 35 and 37.

Ordinary chlorine gas has two isotopes : 3517Cl and 3717Cl in the ratio of 3 : 1. Calculate the relative atomic mass [atomic weight] of chlorine.
Answer: 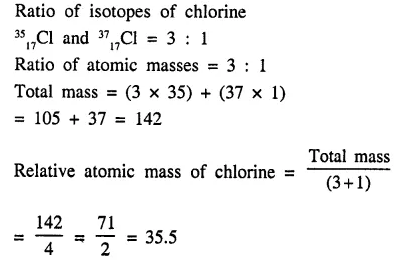 The atom of aluminium is represented by 27Al13. Write down the number of

(a) electrons
(b) protons
(c) neutrons
(d) the arrangement of electrons

in the different orbits or shells in one atom of aluminium.
Answer:

Name the clement which does not contain any neutrons in its nucleus.
Answer:
Element is [H] Hydrogen. 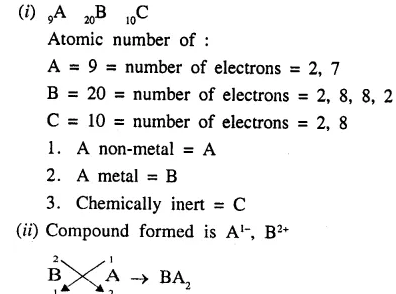 Write down the electronic configuration of the following (i) 2713X, (ii) 3517Y.
Write down the number of electrons in X and neutrons in Y and the formula of the compound formed by X and Y.[XY3] 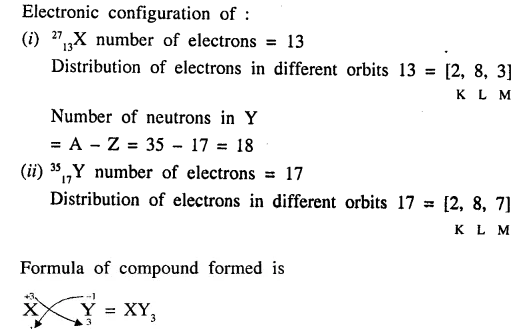 What is a proton ? What is the significance of the number of protons found in the atoms of each of the different elements.
Answer:
Proton : “Is positively charged sub-particle of atom present in nucleus.”
Proton helps in determining and understanding the structure and behaviour of an atom. Elements are arranged on the bases of number of protons in their respective atoms.

Copy and complete the following table relating to the atomic structure of some elements : He found that when an electric discharge is passed through a tube containing a gas at low pressure (0.01 mm of Hg).
Blue rays were emitted from the negative plate [i.e. cathode]. These rays were called cathode rays and consist of negatively charged particles now called electrons. Electrons are essential part of each and every atom.

Since atoms are electrically neutral there must be equal positively charged particles in atom. This led to discovery of the protons.

Goldstein discovered protons. He used a perforated disc as cathode and found positively charged rays travelling in opposite direction to cathode rays.
These were protons i.e. positively charged particles, 1837 times heavier than an electron.

Lord Rutherford in 1911 directed alpha particles (42He) towards gold foil. The deflection of the alpha particles was observed and concluded that there was nucleus at the centre of atom which was positively charged dense very small space (solid) called nucleus.

As atom contains protons and electrons. Atomic mass of electron in negligible.
∴ An atom of helium which contains 2 protons should have a mass = (2 × 1) + 0 = 2 a.m.u. But the atomic mass of a helium atom was found to be approximately 4.0 a.m.u. It was therefore proved that, in the nucleus of an atom, there is an other particle called a neutron which has no electrical charge but is almost of an equal mass as the protons.

State in brief the drawbacks of Rutherfords atomic model correlating them with the postulates of Bohr’s atomic model.
Answer:

Represent each of the following :

What arc ‘energy levels’ ? Explain the arrangement and distribution of electrons in the various shells with reference to an atom in general and to an atom of potassium ‘3919K’ with special referencence to the 2n2 rule.
Answer:

The following elements U to Z are given 3U, 6V, 9W, 14X, 18Y, 20Z.
State the electronic configuration of each and state whether they arc metals, non-metals or inert gases.
Answer: 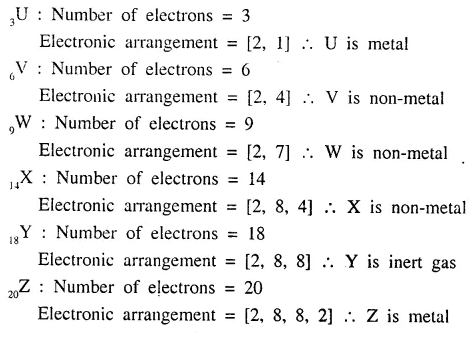 Draw the geometric atomic structure of each of the following atoms showing the number of electrons, protons and neutrons in each of them : 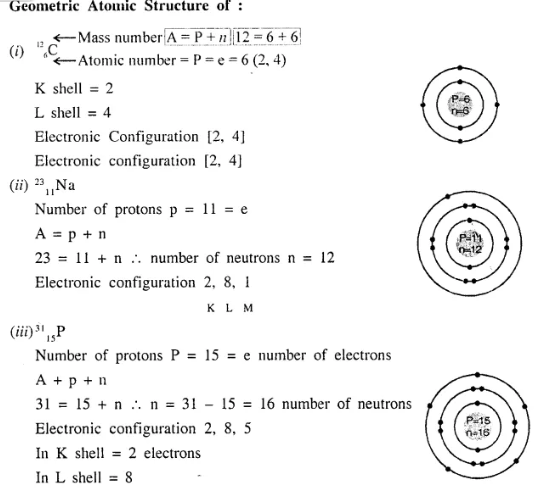 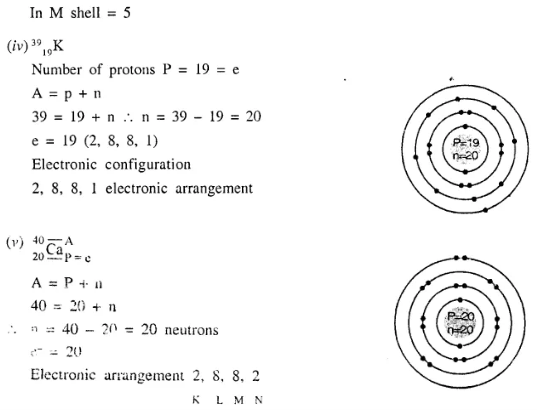 Write the formula of the compound formed between D and C.

(a) Stable and unstable electronic configuration
(b) Duplet and octet rule.

(b) Duplet Rule : For an atom to achieve stable electronic configuration it must have 2 electrons in the first shell [outermost if it is K– shell] like nearest noble gas Helium.

Explain the octet rule for formation of —

(a) Sodium chloride from a sodium atom and a chlorine atom.
(b) Nitrogen molecule from two nitrogen atoms.

(a) Formation of sodium chloride NaCl, Na atom has atomic number 11 [2, 8, 1], There is 1 electron in outermost M shell it is not possible to gain 7 electrons and to lose 1 electron is easier, by losing sodium atom because Na+ ion.
While Cl atomic number 17 [2, 8, 7] has 7 electrons in outermost M shell for Cl atom it is easier to gain 1 electron, becomes Cl– ion.
By losing 1 electron and by gaining 1 electron both sodium and chlorine attain octet configuration and become stable and there is electrostatic force which pulls them and become sodium chloride. 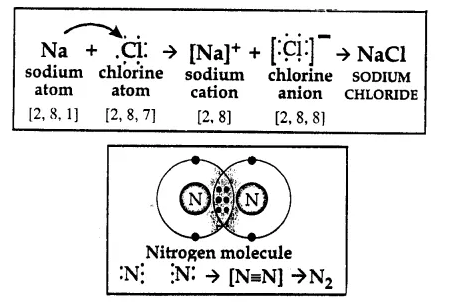 Each atom of nitrogen has 5 electrons in outermost orbit. For both it is not possible to gain 3 electrons or lose 5 electrons to attain nearest inert gas electronic configuration. So they share 3 electrons each and attain octet configuration which is stable and form N2 molecule.

Q.1. Select the correct answer from the answers in brackets to complete each sentence.

Q.2. Give reasons for the following.

(i) Differentiate between Electron and proton

(iii) Differentiate between Nucleus and nucleons

(v) Differentiate between Duplet and Octet

Q.4. Name or state the following.