Name the main metal present in the following :
Answer:

What do you understand by :
Answer:

Metalloids : Metalloids are those substances which have some properties of metals and some of non-metals e.g. boron, silicon.

Noble gases : Noble gases are those which do not react chemically with other elements or compounds e.g. helium, neon, etc. 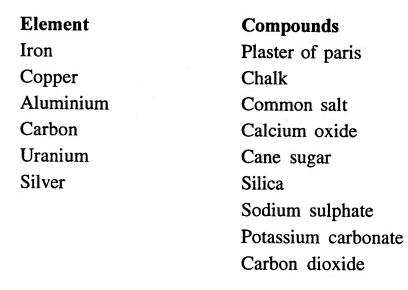 To prepare chemicals in industry.

To maintain the good health of human beings.

Evaporation : Is the process ~of converting a liquid into its vapours state either by exposing it to air or by heating.

Filtration : The process of separating solid particles from liquid by allowing it to pass through a filter paper is called filtration

Sublimation : The process in which a solid changes directly into its vapours on heating is called sublimation.

Distillation : Distillation is the method of getting a pure liquid from a solution by evaporating and then condensing the vapours.

Name the process by which the components of following mixtures can be separated.

How will you separate a mixture of common salt, chalk powder and powdered camphor? Explain.
Answer:
Comphor with sublimation. Chalk powder by Alteration then the residual left is common salt.

On what principle are the following methods of separation based? Give one example of a mixture for each of the methods mentioned in which they are used

Sublimation : Change of solid into vapours directly on heating and change of vapours into solid again on
Example : Salt from ammonium chloride.

This method is used when one of the solid components is soluble in a liquid.
Example : A mixture of sand and salt can be separated by this method. Salt gets dissolved in water while sand settles down in the container. The salt solution is then decanted. Salt is separated from the solution by evaporation. In this way, they can be separated.

By using a separating funnel :

It is a simple device used to separate the components of a liquid-liquid heterogeneous mixture.
Example : Kerosene oil and water. The mixture is placed in a separating funnel and allowed to stand for sometime. The components form two clear layers. Water being heavier forms the lower layer and oil being lighter forms the upper layer. When the stopper of the funnel is opened, the heavier liquid trickles out slowly and is collected in a vessel. The stopper is closed when the bottom layer is entirely removed the funnel. In this way, the two liquids are separated.

The process of distillation is used for separating the components of a homogeneous liquid-liquid mixture, like water and alcohol. This is based on the fact that alcohol boils at a lower temperature than water. The vapour of alcohol are collected and cooled while water is left behind in the original vessel. Thus, two liquids having different boiling points can be separated by distillation provided that difference in their boiling points must be 25 °C or more.

Fill in the blanks:
Answer:

Elements are made up of same kind of atoms.

Elements and compounds are pure substances.

3 In a …….. the substances are not combined chemically.

In a mixture the substances are not combined chemically.

Clay is separated from water by the method called loading and decantation.

5 ………… is a process to obtain a very pure form of a solid dissolved in a liquid.

Crystallisation is a process to obtain a very pure form of a solid dissolved in a liquid.

Camphor and ammonium chloride can sublimate.

Give one word answers for the following :
Answer:

Select the correct alterative from the choices given for the following statements:

A pure liquid is obtained from a solution by :

Components of crude petroleum can be separated by :

Example of a homogeneous mixture is :

In chromatography the filter paper is :

A set of mixture is :