(a) Hydrogen is lighter than air.
(b) Hydrogen is sparingly soluble in water.
(c) Hydrogen bums with a oxyhydrogen pale blue flame and pop sound is heard.
(d) A metal sodium hydrogen in the reactivity series gives hydrogen with water.
(e) Hydrogen reacts with metal oxides to form metal and water.
(f) Oxidation is the removal of hydrogen and addition of oxygen.
(g) In redox reaction oxidation and reduction occur simultaneously.

2. Indicate which of the following statements are true and which are false:

(a) Hydrogen molecule is monovalent.
(b) The removal of hydrogen from a substance is called reduction.
(c) Nitric acid can not be used to prepare hydrogen by its action on active metals ?
(d) The reaction between hydrogen and nitrogen to form ammonia is reversible.
(e) Zinc can liberate hydrogen from water, acid and alkali solution.
(f) Hydrogen is combustible as well as a supporter of combustion.
(g) Hydrogen gas is easily liquefiable.
Answer:
(a) False
(b) True
(c) False. Hydrogen cannot be prepared by the action of nitric acid on metals because it also releases nitrous oxide and nitric oxide.
(d) True
(e) True
(f) False
(g) False

3. Complete and balance the following equations: 4. Give reasons for the following:

(a) Hydrogen be used as a fuel?
(b) Though hydrogen is lighter than air it cannot be collected by downward displacement of air.
(c) A pop sound produced when hydrogen is burnt?
(d) Helium replaced hydrogen in weather observation balloons?
(e) Nitric acid not used for the preparation of hydrogen gas?
(a) Because of its high heat of combustion, it is used as a fuel.

(a) Coal gas, water gas and liquid hydrogen are some significant fuel.
(b) Since hydrogen is lighter than air. it is possible to collect the gas by downward displacement of air. But it is not safe to do so since a mixture of hydrogen and air can lead to an explosion.
(c) Impure hydrogen gas bums in air with a pop sound. This is because of the presence of impurities in it.
(d) If there is small leakage of hydrogen in a balloon, it forms a mixture with air that can explode. So helium has replaced hydrogen.

(e) Hydrogen cannot be prepared by the action of nitric acid on metals because it also releases nitrous oxide and nitric oxide and oxides the hydrogen to form water.

(a) Name the chemicals required to prepare hydrogen
gas in the laboratory.

(b) Give a balanced chemical equation for the reaction.
(c) Draw a neat and well-labelled diagram for the laboratory preparation of hydrogen.
(d) How is hydrogen gas collected?
Answer:
(a) Granulated Zinc and dil. Hydrochloric acid.
(b) Zn + 2 HCl → ZnCl2 + H2 (g) (d) Hydrogen gas is collected by the down-ward displacement of water.

Question 7. How would you show that hydrogen:

(a) is a non-supporter of combustion?
(b) is lighter than air?

(a) Hold a hydrogen gas filled jar with its mouth downwards.
Place a lighted candle inside the jar. The candle gets extinguished but the gas bums with a pop sound. This shows that hydrogen is non-supporter of combustion.

(b) Take a delivery tube and place one of its ends in a soap solution kept in a trough and the other one in a flat bottom jar as shown in the figure. The soap bubbles containing hydrogen rise upward the air. The rising soap bubbles prove that hydrogen is lighter than air.

Hydrogen-filled soap bubbles rising upward in the soap solution and into the air shows that hydrogen is lighter than air.

Hydrogen is a good reducing agent: What do you understand by the above statement? Explain with the help of copper oxide as an example.
Answer:
Hydrogen acts as a good reducing agent means, when hydrogen gas is passed over hot metallic oxides of copper, lead, iron, etc. it removes oxygen from them and thus reduces them to their corresponding metal.
Let us consider the following example, in each of which metallic oxide react with hydrogen. Metallic oxide act as oxidizing agents and hydrogen acts as a

(a) Name a process by which hydrogen gas is manufactured.
(b) Give equations for the reactions.
(c) How is hydrogen separated from carbon dioxide and carbon monoxide?
Answer:
(a) Commercially, hydrogen is prepared by Bosch process.

(i) Steam is passed over hot coke at 1000°C in a furnace called converters. As a result water gas is produced which is a mixture of carbon monoxide and hydrogen gases.

This reaction is exothermic in nature

Match the statements in Column A with those in Column B. 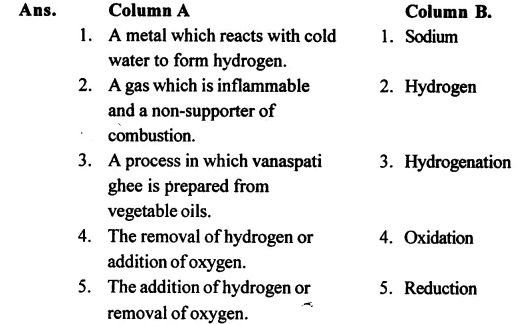 (b) Oxidation: A reaction in which a substance combine with oxygen or in which hydrogen is removed is called oxidation reaction.
Example: H2S + Cl → 2HCl + S

(c) Reduction: Those reactions in which hydrogen combines with a substance or oxygen is removed from a substance, are known as reduction reactions.

(d) Redox reaction: Redox reactions are those in which reduction and oxidation both takes place simultaneously i.e. one substance is reduced while the other gets oxidised.

(c) In metal activity series the more reactive metals are at

(d) Hydrogen is responsible for producing

(f) Water gas is a mixture of