3. Mention two uses of the following metals and non-metals

It is used to make pipes, tanks, railing, etc.
It is used in the construction of power transmission towers.

It is used for making ornaments and coins.
It is used in the manufacture of electronic devices like computers, telephones, home appliances, etc.

It is used by all living beings for breathing.
It is important for combustion.

It is used in photographic films in the form of potassium iodide.
It is added to salt to make it iodized salt which is necessary for the growth of human body.

(a) Magnesium is used in fire works.

Ans : Magnesium is used in fire works because it bums with a dazzling light.

Ans : Copper is ductile and a very good conductor of heat and electricity. This is the reason that copper is used in making electric cables.

Ans : Impure diamond is used to cut glass becuase it is the hardest substance and can easily exert force required for cutting.

5. Name the metals present in the following alloys

6. Give four differences between metals and non-metals with reference to their

(a) Melting point and boiling point,
(b) Conductivity of heat and electricity,
(c) Malleability
(d) Solubility

The most ductile metal is silver

A metal stored in kerosene oil is sodium.
(c) Tungsten metal is a poor conductor of…………..

Pure gold is a soft metal.

(e) Silicon carbide is the hardest compound known to us.

…………. is the hardest compound known to us.
(f) A non-metal used to purify water is phosphorus.

A metal that gives dazzling effect to crackers when they explode is magnesium.
(h) A chemical compound that makes up the striking heads of match sticks is ……………

A chemical compound that makes up the striking heads of match sticks is sulphur. 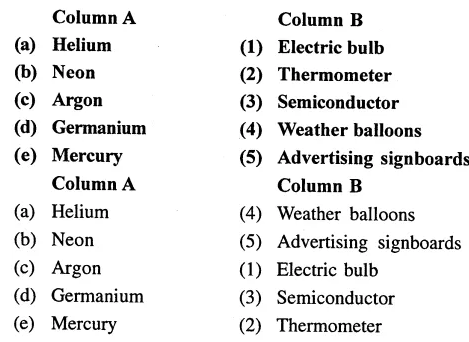 3. Write ‘true’ or ‘false’ for the following statements :
(a) Silver is used to make electric cables : False
(b) Iodine acts as an antiseptic in the form of tincture of iodine : True
(c) Sodium can be cut with a knife : True
(d) Antimony is a metal : False
(e) Sand is an oxide of silicon : True

1. The noble gas used in advertising signboards is
(a) Helium
(b) Neon
(c) Argon
(d) Krypton

3. A metal which is neither ductile nor malleable is
(a) Copper
(b) Silver
(c)Zinc
(d) Aluminium

6. A metalloid used in the manufacture of microchips used in computer is :
(a) Antimony
(b) Germanium
(c) Silicon
(d) Arsenic