The insulating sheath covering the axon is called

Which one of the following pairs of brain part and its function is not correctly matched?

(b) Cerebellum – balance of body

A mixed nerve is one which

(a) Carries sensation from 2 or more different sense organs

(b) Contains both sensory and motor fibres

(d) Has two or more roots from different parts of brain

(b) Contains both sensory and motor fibres

Reflex action is controlled by the

(a) The fluid that is present inside and outside the brain.

(b) The junction between two nerve cells.

(c) The part of the brain which is concerned with memory.

(d) The part of the human brain which controls body temperature.

Note the relationship between the first two words and suggest the suitable word/words for the fourth place.

Complete the following statements by choosing the correct alternative from the choices given in brackets:

(i) Conducting reflexes in the body

(b) Maintaining posture and equilibrium

Mention, where in human body are the following located and state their main functions:

(a) Corpus Callosum – It is located located in the forebrain. It connects two cerebral hemispheres and transfers information from one hemisphere to other.

(b) Central canal – It is located in centre of the spinal cord. It is in continuation with the cavities of the brain. It is filled with cerebrospinal fluid and acts as shock proof cushion. In addition, it also helps in exchange of materials with neurons.

State whether the following statements are true (T) or false (F).

(a) The main component of the white matter of the brain is perikaryon. (T/F)

(b) The arachnoid layer fits closely inside the pia mater. (T/F)

(c) A double chain of ganglia, one on each side of the nerve cord belongs to the spinal cord. (T/F)

(d) Dura mater is the outermost layer of the meninges. (T/F)

Differentiate between the following pairs with reference to the aspects in brackets.

(a) Cerebrum and cerebellum (function)

Given below are two structures, write their special functional activity.

(a) Cerebellum maintains balance of the body and coordinates muscular activity.

(b) Myelin sheath acts like an insulation and prevents mixing of impulses in the adjacent axons.

Write the functions of the following:

(a) Synapse: It is a gap between the axon terminal of one neuron and the dendrites of the adjacent neuron. It transmits nerve impulse from one neuron to another neuron.

(b) Association Neuron: It interconnects sensory and motor neurons.

(c) Medullary sheath: It provides insulation and prevents mixing of impulses in the adjacent axons.

(d) Medulla Oblongata: It controls activities of internal organs such as peristalsis, breathing and many other involuntary actions.

(e) Cerebellum: It maintains balance of the body and coordinates muscular activity.

(f) Cerebrospinal Fluid: It acts like a cushion and protects the brain from shocks.

Motor nerve: It contains motor fibres which carry impulses generated by the association neuron (brain or spinal cord) to the effector organs. Example: A nerve which arises from the brain and ends in the eye muscles is a motor nerve. It helps in rotating the eye.

Autonomic nervous system: It is a part of the peripheral nervous system. It consists of a pair of chains of nerves and ganglia on either side of the backbone. It controls the involuntary actions of the internal organs.

Conditioned reflex: It develops during life time due to experience or learning. It is brought about by the condition which is totally different from initial stimulus. Example: Salivation just by the smell of food.

Association neuron: It is located in the brain and the spinal cord. It acts as a connecting neuron and interconnects the sensory and motor neurons.

Gray matter: The cerebral cortex contains cell bodies of the neuron and is greyish in colour. It is called gray matter. The grey matter has many folds (i.e. gyri) and grooves (i.e. sulci). They increase the surface area to accommodate more nerve cells. A higher number of convolutions leads to greater intelligence.

Rearrange the following in correct sequence pertaining to what is given within brackets at the end. (a) Effector — sensory neuron — receptor — motor neuron — stimulus — central nervous system — response (Reflex arc)

(a) What is meant by reflex action?

(b) State whether the following are simple reflexes, conditioned reflexes or neither of the two.

(iv) Lifting up a book

(a) Reflex action  is an autonomic, quick and involuntary action in the body brought about by a stimulus.

What are the advantages of having a nervous system?

The advantages of having a nervous system are as follows:

(a) Keeps us informed about the outside world through sense organs.

(b) Enables us to remember, think and reason out.

(c) Controls and harmonizes all voluntary muscular activities such as running, holding, writing

(d) Regulates involuntary activities such as breathing, beating of the heart without our thinking about them.

Why is the spinal cord and the brain referred to as the central nervous system?

The brain and the spinal cord lie in the skull and the vertebral column respectively. They have an important role to play because all bodily activities are controlled by them. A stimulus from any part of the body is always carried to the brain or spinal cord for the correct response. A response to a stimulus is also generated in the central nervous system. Therefore, the brain and the spinal cord are called the central nervous system.

What is the difference between reflex action and voluntary action?

Draw a labelled diagram of a Myelinated Neuron During a street fight between two individuals, mention the effects on the following organs by the autonomous nervous system, in the table given below: (one has been done for you as an example).

Two hungry boys (A and B) enter a restaurant and find a table decorated as follows: 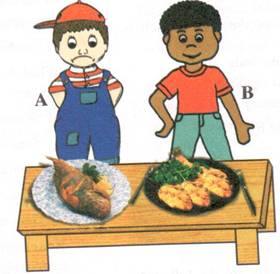 Boy B starts salivating but not A. Explain the reason for this difference.

Salivation is an example of conditioned reflex that develops due to experience or learning. Saliva starts pouring when you chew or eat food. Therefore, this reflex will occur not just on the sight or smell of food. The brain actually needs to remember the taste of food. Boy B started salivating because he must have tasted that food prior unlike boy A.

Given below are a few situations. What effective change will occur in the organ/body part mentioned and which part (sympathetic or parasympathetic) of the autonomic nervous system brings it about?

Given below is the partially incomplete scheme of the components of peripheral nervous system. Fill up the blanks numbered (1)- (12):

Fill in the following information in the diagram.