Thrust is the force acting normally on a surface.

What is meant by pressure? State its S.I. unit.

Pressure is the thrust per unit area of the surface.

(b)How is the unit bar related to the S.I. unit pascal?

(a) Pressure is measured in ‘bar’.

Define one pascal (Pa), the S.I. unit of pressure.

One pascal is the pressure exerted on a surface of area 1 m2 by a force of 1N acting normally on it.

State whether thrust is a scalar or vector?

Thrust is a vector quantity.

State whether pressure is a scalar or vector?

Pressure is a scalar quantity.

Differentiate between thrust and pressure.

Thrust is the force applied on a surface in a perpendicular direction and it is a vector quantity. The effect of thrust per unit area is pressure, and it is a scalar quantity.

How does the pressure exerted by thrust depend on the area of surface on which it acts? Explain with a suitable example.

Why is the tip of an allpin made sharp?

The tip of an allpin is made sharp so that large pressure is exerted at the sharp end and it can be driven into with less effort.

(a) It is easier to cut with a sharp knife than with a blunt one.

(b) Sleepers are laid below the rails.

(a) It is easier to cut with a sharp knife because even a small thrust causes great pressure at the edges and cutting can be done with less effort.

(b) Wide wooden sleepers are placed below the railway tracks so that the pressure exerted by the rails on the ground becomes less.

What is a fluid?

A substance which can flow is called a fluid.

What do you mean by the term fluid pressure?

Due to its weight, a fluid exerts pressure in all directions; the pressure exerted by the fluid is called fluid pressure.

How does the pressure exerted by a solid and fluid differ?

Describe a simple experiment to demonstrate that a liquid enclosed in a vessel exerts pressure in all directions.

Take a can or large plastic bottle filled with water. Place it on a horizontal surface. Make a series of holes in the wall of the vessel anywhere below the free surface of the liquid. The water spurts out through each hole. This shows that the liquid exerts pressure at each point on the wall of the bottle. Liquid exerts pressure at all points in all directions

State three factors on which the pressure at a point in a liquid depends.

Pressure at a point in a liquid depends upon the following three factors:

(i) Depth of the point below the free surface.

(iii) Acceleration due to gravity.

Write an expression for the pressure at a point inside a liquid. Explain the meaning of the symbols used.

Here, P = Pressure exerted at a point in the liquid

h = Depth of the point below the free surface

= Density of the liquid

g = Acceleration due to gravity

Deduce an expression for the pressure at depth inside a liquid.

= Weight of the liquid column PQRS

This thrust is exerted on the surface PQ of area A. Therefore, pressure is given as shown below.

How does the pressure at a certain depth in sea water differ from that at the same depth in river water? Explain your answer.

Pressure at the free surface of a water lake is P1, while at a point at depth h below its free surface is P2. (a) How are P1 and P2 related? (b)Which is more P1 or P2?

Explain why a gas bubble released at the bottom of a lake grows in size as it rises to the surface of the lake.

A dam has broader walls at the bottom than at the top. Explain.

The pressure exerted by a liquid increases with its depth. Thus as depth increases, more and more pressure is exerted by water on wall of the dam. A thicker wall is required to withstand greater pressure, therefore, the thickness of the wall of dam increases towards the bottom.

State the laws of liquid pressure.

(i) Pressure at a point inside the liquid increases with the depth from its free surface.

(ii) In a stationary liquid, pressure is same at all points on a horizontal plane.

(iii) Pressure is same in all directions about a point in the liquid.

(iv) Pressure at same depth is different in different liquids. It increases with the increase in the density of liquid.

(v) A liquid seeks its own level.

A tall vertical cylinder filled with water is kept on a horizontal table top. Two small holes A and B are made on the wall of the cylinder, one near the bottom and other just below the free surface of water. State and explain your observation.

The liquid from hole B reaches a greater distance on the horizontal surface than that from hole A.

This explains that liquid pressure at a point increases with the depth of point from the free surface.

How does the liquid pressure on a diver change if:

(i) the diver moves to the greater depth, and

(i) As the diver moves to a greater depth, pressure exerted by sea water on him also increases.

(ii) When the diver moves horizontally, his depth from the free surface remains constant and hence the pressure on him remains unchanged.

Pascal’s law states that the pressure exerted anywhere in a confined liquid is transmitted equally and undiminished in all directions throughout the liquid.

Explain the principle of a hydraulic machine. Name two devices which work on this principle.

The principle of a hydraulic machine is that a small force applied on a smaller piston is transmitted to produce a large force on the bigger piston.

Hydraulic press and hydraulic brakes work on this principle.

It states that a small force applied on a smaller piston is transmitted to produce a large force on the bigger piston.

Use: It is used for squeezing oil out of linseed and cotton seeds.

The diagram below in Fig. 4.12 shows a device which makes the use of the principle of transmission of pressure. 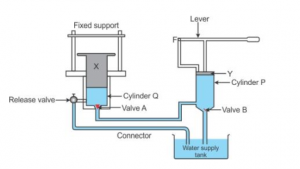 (i) Name the parts labelled by the letters X and Y.

(iii) Give reasons for what happens to the valves

(iv) What happens when the release valve is opened?

(v) What happens to the valve B in cylinder P when the lever arm is moved up?

(vi) Give a reason for your answer in part (v).

(vii) State one use of the above device.

(ii) When the lever is moved down, valve B closes and valve A opens, so the water from cylinder P is forced into the cylinder Q.

(iv) When the release valve is opened, the ram (or press) plunger Q gets lowered and water of the cylinder Q runs out in the reservoir.

Draw a simple diagram of a hydraulic jack and explain its working.

Working: When handle H of the lever is pressed down by applying an effort, the valve V opens because of increase in pressure in cylinder P. The liquid runs out from the cylinder P to the cylinder Q. As a result, the piston B rises up and it raises the car placed on the platform. When the car reaches the desired height, the handle H of the lever is no longer pressed. The valve V gets closed (since the pressure on the either side of the valve becomes same) so that the liquid may not run back from the cylinder Q to cylinder P.

Explain the working of a hydraulic brake with a simple labelled diagram. 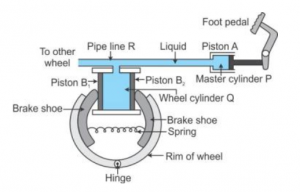 Working: To apply brakes, the foot pedal is pressed due to which pressure is exerted on the liquid in the master cylinder P, so liquid runs out from the master cylinder P to the wheel cylinder Q. As a result, the pressure is transmitted equally and undiminished through the liquid to the pistons B1 and B2 of the wheel cylinder. Therefore, the pistons B1 and B2 get pushed outwards and brake shoes get pressed against the rim of the wheel due to which the motion of the vehicle retards. Due to transmission of pressure through the liquid, equal pressure is exerted on all the wheels of the vehicle connected to the pipe line R.

On releasing the pressure on the pedal, the liquid runs back from the wheel cylinder Q to the master cylinder P and the spring pulls the break shoes to their original position and forces the pistons B1 and B2 to return back into the wheel cylinder Q. Thus, the brakes get released.

The S.I. unit of pressure is :

The pressure inside a liquid of density p at a depth h is:

The pressure P1 at a certain depth in river water and P2 at the same depth in sea water are related as:

The pressure P1 at the top of a dam and P2 at a depth h form the inside water (density p) are related as :

NUMERICAL 4(A) Pressure in Fluids and Atmospheric Pressure Selina Physics

A hammer exerts a force of 1.5 N on each of the two nails A and B. The area of cross section of tip of nail A is 2 mm2 while that of nail B is 6 mm2. Calculate pressure on each nail in pascal.

(b) Pressure exerted on the table top 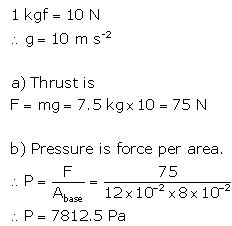 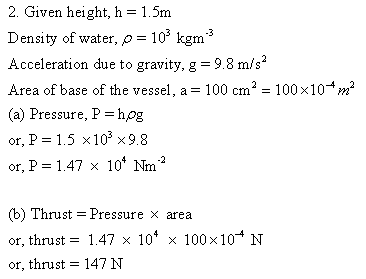 The area of base of a cylindrical vessel is 300 cm2.

(a) Calculate the height of a water column which will exert on its base the same pressure as the 70 cm column of mercury. Density of mercury is 13-6 g cm-3. 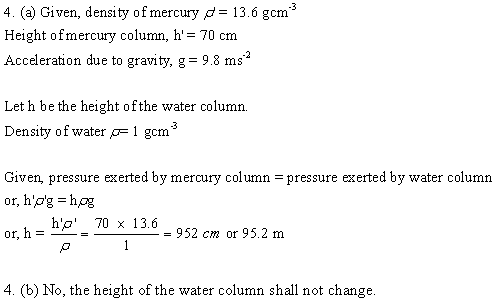 A simple U tube contains mercury to the same level in both of its arms. If water is poured to a height of 13.6 cm in one arm, how much will be the rise in mercury level in the other arm? 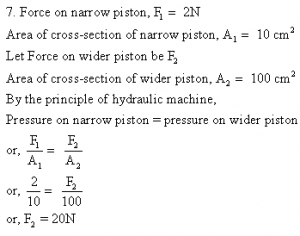 What should be the ratio of area of cross section of the master cylinder and wheel cylinder of a hydraulic brake so that a force of 15 N can be obtained at each of its brake shoe by exerting a force of 0.5 N on the pedal ? 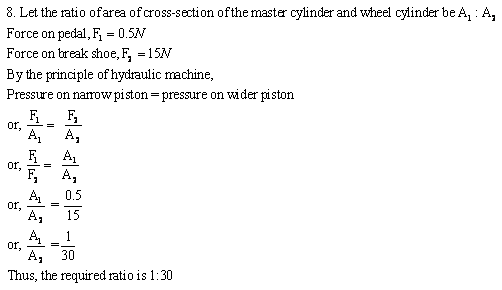 The areas of pistons in a hydraulic machine are

5 cm2 and 625 cm2. What force on the smaller piston will support a load of 1250 N on the larger piston? State any assumption which you make in your calculation. 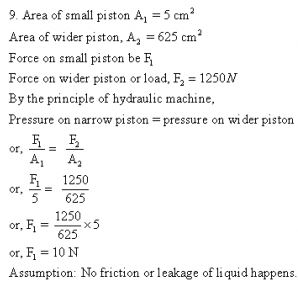 (a)  The diameter of neck and bottom of a bottle are 2 cm and 10 cm, respectively. The bottle is completely filled with oil. If the cork in the neck is pressed in with a force of 1.2 kgf, what force is exerted on the bottom of the bottle?

(b) Name the law/principle you have used to find the force in part (i). A force of 50 kgf is applied to the smaller piston of a hydraulic machine. Neglecting friction, find the force exerted on the large piston, if the diameters of the pistons are 5 cm and 25 cm respectively. 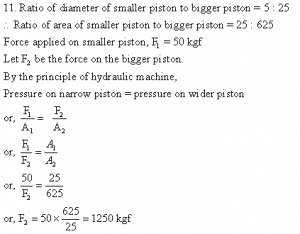 Two cylindrical vessels fitted with pistons A and B of area of cross section 8 cm2 and 320 cm2 respectively, are joined at their bottom by a tube and they are completely filled with water. When a mass of 4 kg is placed on piston A, Find :

(i) the pressure on piston A,

(ii) the pressure on piston B, and

(iii) the thrust on piston B.

(ii) According to Pascal’s Law

∴ Thrust acting on piston B in the upward direction = 160 kg. 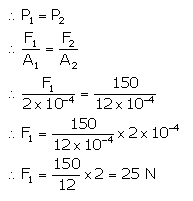 In a hydraulic machine

–: End of Pressure in Fluids and Atmospheric Pressure Solutions :–