A motor car is going due north at a speed of 50 km/h. It makes a 90° left turn without changing the speed. The change in the velocity of the car is about

The option (b) 70 km/h towards south-west. is correct 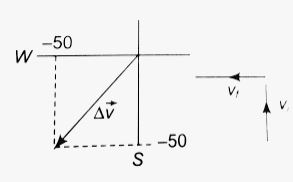 In figure shows the displacement-time graph of a particle moving on the X-axis. 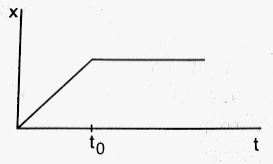 (b) the particle is at rest

(c) the velocity increases up to a time t0, and them become constant

(d) the particle moves at a constant velocity up to a time t0, and then stops.

The option (d) the particle moves at a constant velocity up to a time t0, and then stops. is correct

The particle moves at a constant velocity up to a time t0 and then stops.

The slope of the x–t graph gives the velocity. In the graph, the slope is constant from t = 0 to t = t0, so the velocity is constant. After t = t0, the displacement is zero; i.e., the particle stops.

A particle has a velocity u towards east at t = 0. Its acceleration is towards west and is constant. Let xA and xB be the magnitude of displacements in the first 10 seconds and the next 10 seconds

(d) the information is insufficient to decide the relation of xA with xB.

The option (d) the information is insufficient to decide the relation of xA with xB. is correct

As velocity and acceleration are in opposite directions, velocity will become zero after some time (t) and the particle will return.

Because the value of acceleration is not given, we cannot say that the particle will return after/before 10 seconds. 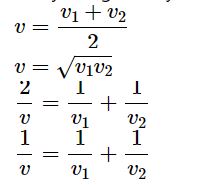 The option (c)  is correct 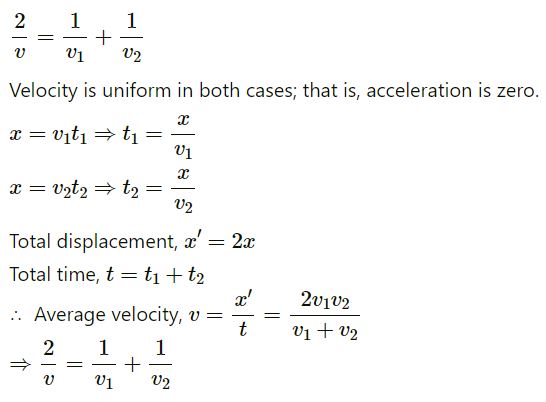 A stone is released from an elevator going up with an acceleration a. The acceleration of the stone after the release is

Gravity is the only force acting on the stone when it is released. And, we know that gravity is always in the downward direction

(d) the relation between vA and vB depends on height of the building above the ground.

Total energy of any particle =

At the ground, they are at the same height. So, their P.E. are also equal; this implies that their K.E. should also be equal. In other words, their final velocities are equal

In a projectile motion the velocity

(a) is always perpendicular to the acceleration

(b)  is never perpendicular to the acceleration

(c) is perpendicular to the acceleration for one instant only

(d)  is perpendicular to the acceleration for two instants.

Two bullets are fired simultaneously, horizontally and with different speeds from the same place. Which bullet will hit he ground first?

(a) the faster one

(b) the slower one

(c) both will reach simultaneously

(d) depends on the masses.

The option (c) both will reach simultaneously is correct

Because the downward acceleration and the initial velocity in downward direction of the two bullets are the same, they will take the same time to hit the ground and for a half projectile. 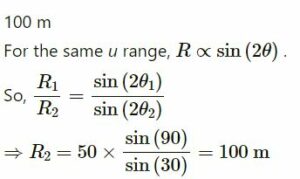 (d) the information is insufficient to decide the relation of RA with RB.

The option (d) the information is insufficient to decide the relation of RA with RB. is correct

Horizontal range for the projectile,

Information of the initial velocity is not given in the question

A river is flowing from west to east at a speed of 5 metres per minute. A man on the south bank of the river, capable of swimming at 10 metres per minute in still water, wants to swim across the river in the shortest time. He should swim in a direction.

The option (a) due north is correct

If the man swims at any angle east to the north direction, although his relative speed will increase, he will have to travel a larger distance. So, he will take more time.

If the man swims at any angle west to the north direction, his relative speed will decrease. So, he will take more time
Page-50

In the arrangement shown in figure the ends P and Q of an inextensible string move downwards with uniform speed u. Pulleys A and B are fixed. The mass M moves upwards with a speed 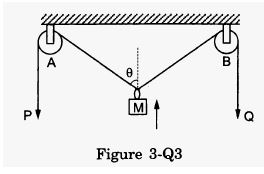 The option (b) u/cos θ is correct

Along the string, the velocity of each object is the same.

How to Prepare for CISCE…