1. State whether the following statements are True or False.

(a) A boy does work while pushing a wall.
Answer. False

(b) A machine performs work by itself.
Answer. False

(c) In an ideal machine, work done on load is equal to the work done by effort.
Answer. True

(e) A pulley changes the direction of force.
Answer. True

(f) An inclined plane always has the mechanical advantage more than 1.
Answer. True 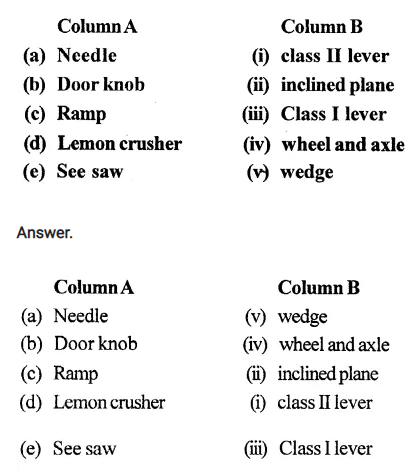 (a) For an ideal machine, the efficiency is

(b) Mechanical advantage of a machine is defined as:

(c) The mechanical advantage of a lever is equal to:

(d) A pulley is used because it

helps to apply the force in a convenient direction

(e) Wheel is used with axle because

helps to apply the force in a convenient direction

What is energy ?
Answer:
Energy: The ability or capacity to do work is called energy.

What do you understand by a machine ?
Answer:
Machine: A machine is a device that allows us to do work with less effort. Machines make our work easier to do. Machines have made our li ves comfortable and faster.

What is the principle on which a machine works ?
Answer:
Principle of a Machine: The work output of a machine is equal to the work input.

State two functions of a machine.
Answer:
Various functions that a machine can perform are:

Name six simple machines. Give an example of each machine.
Answer:
The Simple Machines and there examples are as follows:

What is a lever ?

Answer:
Lever: A lever is a simple rigid bar which is free to move around a point called fulcrum.

Describe three orders of levers giving an example of each. Draw neat diagrams showing the positions of fulcrum, load and effort in each kind of lever.
Answer:
The levers are of three kinds :
Class I levers which have fulcrum in between the load and the effort. 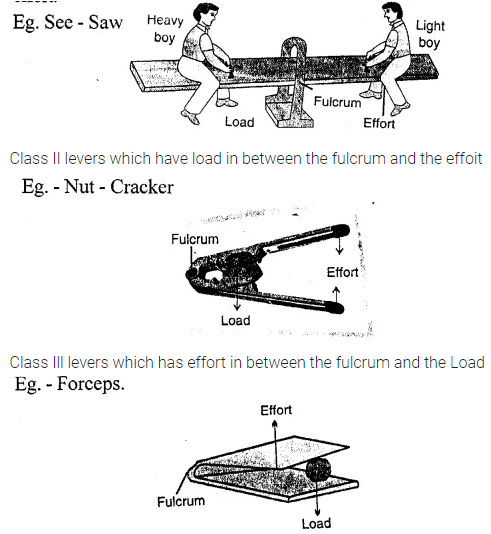 Name the class to which the following levers belong:

The diagram given below shows the three kinds of levers. Name the class of each lever and give one example of each class. 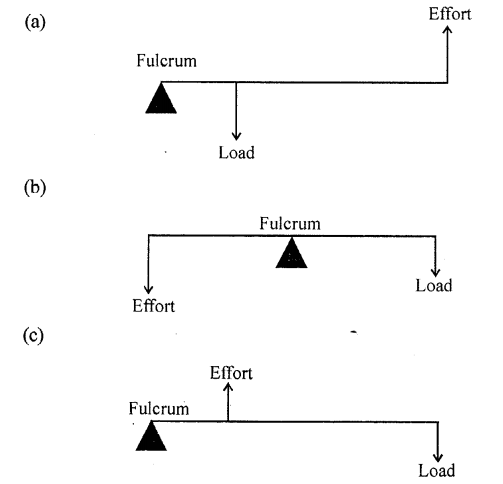 The examples of class I levers are : a see saw, a pair of scissors, a pair of pilers, crow bar, common balance, spoon opening the lid of a tin can, handle of a hand pump.

and Examples of levers of class III are : a pair of tongs, sugar tongs, knife, forceps,-forearm of a person holding a load, spade for lifting soil or coal

Draw diagrams to illustrate the positions of fulcrum, load and effort, in each of the following:
(a) a see saw
(b) a see saw
(c) a nut cracker
(d) a pair of forceps
Answer: 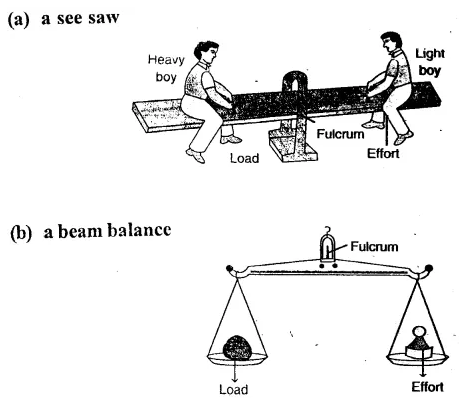 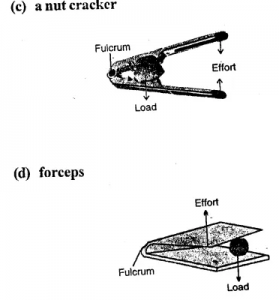 State three differences between the three classes of levers.
Answer: 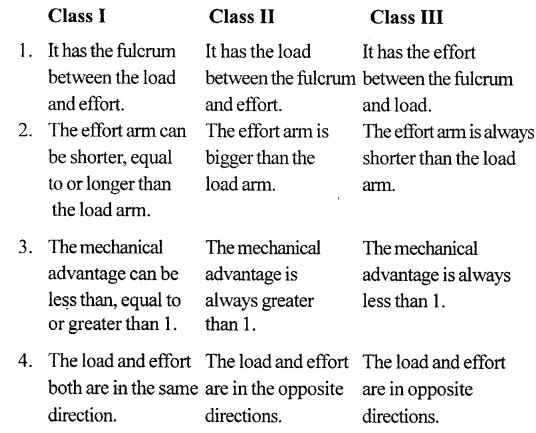 What is a pulley ?
Answer:
Pulley: It is a flat circular disc with a groove in its edge and a rope passing through the groove. It is capable of rotating around a fixed point passing through its central axis called axle.

The reason for using the pulley when its mechanical advantage is equal to 1 or less than 1 is that the pulley allows us to apply the effort downwards i.e. in a convenient direction. To raise a load directly upwards is difficult. But with the help of a pulley, the effort can be applied in the downward direction to move the load upwards. One can hang on it to make use of his own weight also in order to apply the effort.

Draw a neat labelled diagram showing a pulley being used to lift a load. How are load and effort related in an ideal situation?
Answer:
To raise a load, the load is attached to one end of the string and the effort is applied at the other end by pulling it is downward direction . as shown in fig. 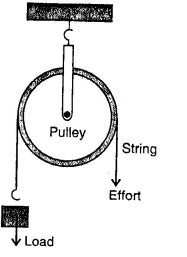 What is an inclined plane? What is its use ? Give two examples where ¡t is used.
Answer:
An inclined plane is a rigid sloping surface over which heavy loads can be raised or lowered to a certain height or depth.
The mechanical advantage of an inclined plane is the ratio of the length of the plank to the vertical height of the load raised. Its value is greater than one. Therefore, an inclined plane acts as a force multiplier. Thus, it can be used to lift heavy loads.
Example : If a heavy box needs to be loaded on a lorry, it is far easier to push it over an inclined plane than to lift it up. Steeper the inclined plane, greater will be the effort required to push up the load.
Sloping ramps, flyovers, roads on hills and staircases are all examples of inclined planes.

What is a screw ? Give two examples.
Answer:
A screw is a simple machine which appears like an inclined plane wound around a rod with a pointed tip.
Examples : ajar lid, a drill.

What is wheel and axle ? Give two examples.
Answer:
The wheel and axle is a simple machine having a wheel and an axle. The linear motion of axle is obtained by rotating the wheel so as to reduce friction. Example: Steering wheel, screw drivers, water tap etc.

How does a wheel help in moving the axle ?
Answer:

Wheel-and-axle arrangement consists of two cylinders of different diameters joined together such that if one is made to rotate, the other also rotates. The axle is a cylindrical rod fixed to the centre of a circular disc-like object called the wheel.

This machine acts as a speed multiplier device.
In riding a bicycle, when we apply force on the wheel (by pedal), the fixed axle rotates with it easily. This force that turns the axle produces a much larger movement of the wheel.

What is a wedge ? Give two examples.
Answer:

A wedge is a double inclined plane such that the two sloping surfaces taper to form either a sharp edge or a pointed edge. Examples : A knife, an axe, a chisel.
In some special cases, the number of inclined planes used can be more than two as well. In such cases, the sloping surfaces generally taper to form either a very sharp or a pointed edge to split or pierce materials. Pins, nails and needles are examples of pointed wedges. The front end of a boat is shaped like a wedge so that it can easily cut across the flowing water.
The wedge works on a principle of an inclined plane.

Name the machine to which the following belong :

What care would you take to increase the life span of a machine which you use ?
Answer:
Taking care of machines: Some of the ways in which machines should be cared for are given below :

In a machine an effort of 10 kgf is applied to lift a load of 100 kgf. What is its mechanical advantage ?
Answer:
Given,
Load = loo kgf
Effort = 10 kgf 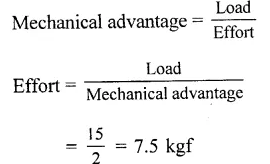 A lever of length 100 cm has effort of 15 kgf at a distance of 40 cm from the fulcrum at one end. What load can be applied at its other end ?
Answer: 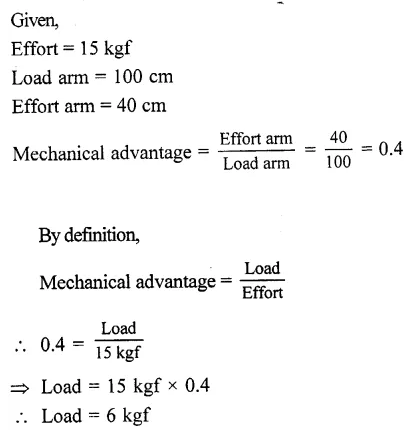 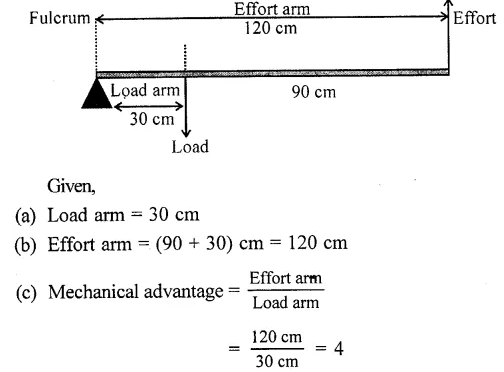