(a) When sound propagates in air, it does not carry energy with it.
Answer. False.

(b) In a longitudinal wave, compression and rarefaction are formed.
Answer. True.

(c) The distance from one compression to nearest rarefaction is called wavelength.
Answer. False.

(d) The frequency is measured in second.
Answer. False.

(e) The quality of a sound depends on the amplitude of wave.
Answer. False.

(f) The pitch of sound depends on frequency.
Answer. True.

(g) Decibel is the unit of pitch of a sound.
Answer. False.

(a) The time period of a wave is 2 s. Its frequency is 0.5 S-1.
(b) The pitch of a stringed instrument is increased by increasing tension in string.
(c) The pitch of a flute is decreased by increasing length of air column.
(d) Smaller the membrane, higher is the pitch.
(e) If a drum is beaten hard, its loudness increases.
(f) A tuning fork produces sound of single frequency. (a) Sound can not travel in

(b) When sound travels in form of a wave

the particles of medium transfer energy without leaving their mean positions.

(c) The safe limit of loudness of audible sound is

(d) The unit of loudness is

(e) In a piano, pitch is decreased by

How does sound travel in air?

A periodic disturbance in the medium (Air) is created by the vibration of sound and the particles of the medium vibrate about their mean position and transfer of energy in the form of sound waves takes place, i.e. in the LONGITUDINAL WAVES

What is longitudinal wave?

Longitudinal wave: The wave in which the particles of the medium vibrate about their mean positions in the direction of propagation of sound is called longitudinal wave. Such a wave can be produced in solids, liquids as well as gases.

Explain the mechanism of the formation of a longitudinal wave when the source vibrates in the air.

When a source vibrates in the medium, it creates disturbances which travel in the medium in the form of longitudinal waves. 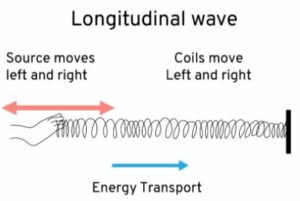 (a) Amplitude – The maximum displacement of a wave on either side of its mean position is called Amplitude.

(b) Frequency – Number of oscillations made by a wave in one second is known as frequency.

(c) Time period – Time taken to complete one vibration is called time period, i.e. from A to B.

Obtain relationship between the time period and frequency.

Sounds can be distinguished from one another by the following three different characteristics:

Name the quantity from below which determines the loudness of a sound wave :
(a) Wavelength
(b) Frequency, and
(c) Amplitude

Quantity which determines loudness of a sound wave is (c) AMPLITUDE.

How is loudness related to the amplitude of wave? 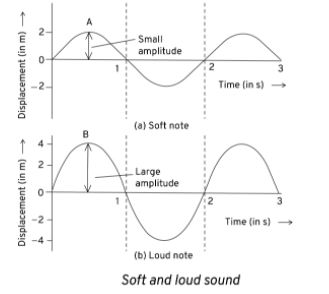 If the amplitude of a wave is doubled, what will be the effect on its loudness?

The loudness of sound is directly proportional to the square of the amplitude of waves.
Loudness α (amplitude)2 When the amplitude is doubled loudness becomes ( 2 )2 = 4 times

How does the wave pattern of a loud note differ from a soft note? Draw a diagram

Greater the amplitude, greater is the loudness.

Name the unit in which the loudness of sound is expressed?

Loudness of sound is expressed in decibel (dB)

Why is the loudness of sound heard by a plucked wire increased when mounted on a sound board?

A wire mounted on a soundboard is plucked, the surface area of vibrating air increases and sends forth a greater amount of energy, So the amplitude of vibration is large and louder is the sound

State three factors on which loudness of sound heard by a listener depends.

THREE FACTOR FOR LOUDNESS OF SOUND:

What determines the pitch of a sound?

Name the characteristic of sound related to its frequency

Characteristic of sound related to its frequency is PITCH.

Name and define the characteristic which enables one to distinguish two sounds of same loudness, but of different frequencies, given by the same instrument.

Sounds of different frequencies but of same loudness and timbre can be distinguished by the property called ‘pitch’ of sound.

Draw a diagram to show the wave pattern of high pitch note and a low pitch note, but of the same loudness. 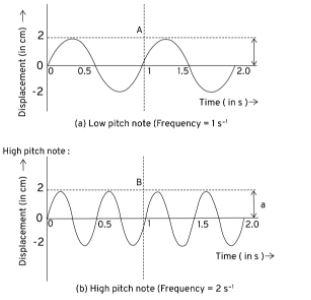 How is it possible to detect the filling of a bucket under a water tap by hearing the sound standing at a distance?

The frequencies of notes given by flute, guitar and trumpet are respectively 400 Hz, 200 Hz and 500 Hz. Which one of these has the highest pitch?

Frequency is directly proportional to pitch. Higher the frequency, higher the pitch. Hence, trumpet has the highest frequency of 500 Hz, and highest pitch.

Figure shows two jars A and B containing water up to different heights. Which will produce sound of higher pitch when air is blown on them? 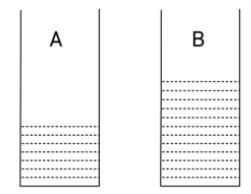 The air column determines the frequency of the sound produced, less air column produces increased frequency. Jar B has lesser air column above water and it will produce higher pitch. 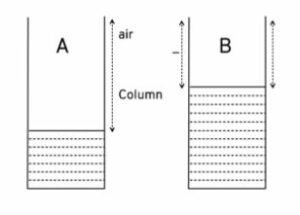 Two identical guitars are played by two persons to give notes of the same pitch. Will they differ in quality? Give reason for your answer.

Two musical notes of the same pitch and same loudness are played on two different instruments. Their wave patterns are as shown in figure.

(b) Pitch of each is the same.

Which characteristics of sound makes it possible to recognize a person by his voice without seeing him?

Timbre and pitch are the characteristics of sound that make it possible to recognize a person by his voice without seeing him.

State the factors that determine

(b) The loudness of the sound heard

(c) the quality of the note.

(a) amplitude (b) waveform (c) frequency

Figure shows four waves A, B, C, and D 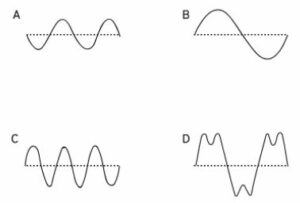 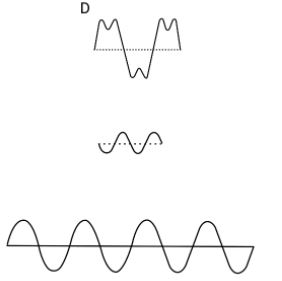 (a) a note from a musical instrument is shown by figure (d);

(c) a shrill note is shown by figure (c)

How is the pitch of sound in a guitar changed if

(b) wire under less tension is used?

(a) Higher pitch is obtained

(b) Low pitch is obtained.

Two waves of the same pitch have amplitudes in the ratio 1: 3 What will be the ratio of their (i) loudness, (ii) pitch?

Loudness is proportional to amplitude square Ratio of loudness  =

(ii) Frequency of the sound wave has no effect on amplitude.
so, frequency remains the same if the pitch is unchanged.

Two waves have frequencies 256 Hz and 512 Hz, but same amplitude. Compare their (i) loudness, and (ii) pitch

(i) LOUDNESS :
∴ Amplitude of two waves is the same
∴ their loudness is the same i.e. in 1:1