(a) Function of WBCs is to
(i) Transport oxygen
(ii) Help in clotting of blood
(iii) Provide immunity
(iv) Provide storage of food.

Function of WBCs is to

(b) Blood Capillary is a
(i) Broad tube
(ii) Artery with thick wall
(iii) Vein with large lumen
(iv) Narrow tube made up of endothelium only.

Answer Option (iv) Narrow tube made up of endothelium only.

(c) Nucleus is absent in

(d) The only artery which carries deoxygenated blood is called,

(g) The blood tastes saltish due to the dissolved:

Differentiate between Patelets and WBC

Give any three differences between an artery and a vein:

Following are the differences between the artery and a vein:

Blood consists of two parts — a liquid part and a cellular part. Name these parts and briefly write about them.

5. Fill in the blanks with suitable words given below:

Ans :- The colour of a red blood cell is due to haemoglobin.

2 The two lower chambers of the heart are called………..

Ans :- The two lower chambers of the heart are called ventricles.

3 The blood plasma contains a dissolved substance such as nutrient, …… and ……

Ans :-  The blood plasma contains a dissolved substance such as nutrient, proteins, waste products and harmones.

4 The …………… artery takes the blood from the ventricles to the lungs.

Ans :-  The pulmonary artery takes the blood from the ventricles to the lungs.

Ans :-  The instrument used to find out the blood pressure is known as sphygmomanometer.

6 The blood loaded with carbon dioxide from the body comes into the ……..of the heart.

Ans :-  The blood loaded with carbon dioxide from the body comes into the right auricle of the heart.

7 The oxygen-rich blood from the lungs comes into the …………. of the heart.

Ans :- The oxygen-rich blood from the lungs comes into the left ventricle of the heart.

8 The oxygen-rich blood is pumped into different parts of the body through ……..

Ans :-  The oxygen-rich blood is pumped into different parts of the body through aorta.

9 The carbon dioxide loaded blood from right ventricle is pumped into the lungs through ………..

Ans :- The carbon dioxide loaded blood from right ventricle is pumped into the lungs through pulmonary artery.

Ans :- The liquid part of coagulated blood is known as serum.

In which organ of our body does blood get oxygenated?

Blood becomes oxygenated in the lungs. The oxygenated blood is returned to left verticles by the pulmonary vein.

Name the disease in which the number of platelets reduces to 25,000 – 30,000 per cubic mm of blood. State its major symptoms.

Dengue fever is one such disease in which the number of platelets get reduced to as low as 25-30 thousands per cubic mm of blood. The major symptoms of dengue are high fever, rashes or red spots on body, nausea or vomiting, pain in abdomen, back, or back of the eyes and muscles.

Name the three kinds of blood vessels found in human beings. With the help of suitable diagrams, differentiate between them.

The three kind of blood vessels found in human beings are arteries, veins and capillaries.

Capillaries: These are the terminal branches of an artery, which rejoin to form a vein. A capillary is a very narrow tube whose walls have a single layer of cells with no muscles. Although the wall of a capillary is very thin, yet an exchange of nutrients, waste products and gases take place between the b 1 ood and the body flu ids.

During surgical operations or during accidents, the patient may be given blood from outside to save his life. What is the technical name of this process ? Briefly explain the precautions to be taken in this process.

During surgical operation or an accident when excess of bleeding takes place, the patient may be given blood from outside to save his life.
The transfer of blood from the donor to the recipient is called blood transfusion.
The following precautions are taken before the blood is given to the needy person:

You can see some blood vessels on the outside of the hands specially in older people. Are those veins or arteries ? How can you confirm your answer ?

In older persons the skin becomes loose as the fat below becomes less with age and the vessels passing through these areas especially on the outside of the hands become prominent. These are veins as they flow superficially. The veins are thin and less muscular. These carry the blood to the heart veins are placed superficially so they are easily visible to the eye and are prominent.
The blood in the veins will be carrying CO2 and will have many substances like sugar, amino acids, chemicals and bacteria.

Given alongside is a diagram of human heart showing its internal structures. Label the parts marked 1 to 6, and answer the following questions. 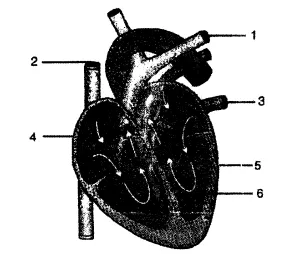 — : end of The Circulatory System Solutions :–