Why is water very precious for all living beings ?

Answer:
Water is one of the most precious substances for the existence of life. Since life on the earth began in the oceans, and since no living thing can survive without water, it is rightly called the source of life.
Water forms a large part of the body mass of all living organisms — 90% of human blood is water. Water has the ability to dissolve a number of substances. Therefore, it serve as the liquid medium in which all reactions within the living body take place.
Fruits and vegetables contain water in them. Even dry-looking substances like wood, peas, beans, grams, etc., contain some amount of water.

Name the two gases from which water is formed. What is the chemical composition of these two gases in water ? Give the molecular formula of water ?
Answer:
Oxygen and hydrogen

Give reasons:
(a) Water is used as a cooling agent

(b) Water pipes burst in severe winters.
(c) It is difficult to cook in hills compared to plains.
(d) Ice floats on water.
(e) Sea water does not freeze at 0°C.
Answer:
(a) Water has high specific heat. Water neither heats up nor cools down quickly. This property makes water as a excellent cooling agent.
(b) Water pipes bursts in severe winter because the water inside I the pipes freezes and increases its volume.
(c) Water boils at a lower temperature in the hills, where the atmospheric pressure is lower than in the plains. This is why it takes a longer time to cook in hilly regions.
(d) Ice has low density as compared to water. Water has maximum density at 4°C. That is why ice floats on water.
(e) There are impurities dissolved in sea water which increases the freezing point. That is why sea water does not freeze at 0°C.

How does anomalous expansion of water help aquatic organisms in cold climates ?
Answer:
The anomalous expansion of water helps in survivals of water animals in very cold climates. Initially when temperature of water falls, it becomes heavier and sinks down. This process continues till 4°C. Then after this expansion takes place. The surface layer of water gets freezed. Ice being bad conductor of heat does not allow loss of heat from the water below and results in survival of water animals.

Explain the terms:
(a) Solution (b) Solute (c) Solvent.
Answer:
(a) Solution: “A homogeneous mixture of two or more substances can be varied is called a solution”.
(b) Solute: A substance which dissolves in a other substances to form a solution is called solute. Solute is smaller quantity in solution.

(b) Pressure has practically no effect on the solubility of a solid (solute) in water.

In the case of gases, the amount of a gas dissolved in water increases with an increase in pressure.

(b) Suspension and colloids

Define: ‘water of crystallisation’. Give two examples with formulae.
Answer:
The fixed amount of water which is in loose chemical combination with a salt in its crystal is called water of crystallization. Examples:

What do you observe when:
(a) Blue vitriol is heated ?
(b) Washing soda is exposed to air ?
(c) Blue litmus solution is added to water ?
Answer:
(a) Blue vitriol is blue in colour as it contains 5 molecules of water of crystallisation (CuSO^HjO). When it is heated, it loses water of crystallisation and becomes an hydrous CuS04 which is grey-white in colour.
(b) Washing soda (Na2CO3.10H2O) is a white crystalline substance and on exposure to air it gets changed to white powder.
(c) Pure water is neutral to litmus which means that no change in the colour of blue or red litmus solution is observed when 1 treated with water

Give reason:
(a) Silica gel pouches are kept in unused water bottles.
(b) Table salt becomes moist during rainy season.
(c) On opening a bottle of a cold drink, a fizz sound is heard.
Answer:
(a) Silica get pouches are very commonly used to absorb moisture and to keep things dry. They are often kept in unused water bottles, with camera lenses etc. to keep them dry. These pouches are ideal to reuse throughout, in places at home where there is excess of moisture.

(b) On exposure to air, table salt (NaCl) turns moist and ultimately forms a solution especially during rainy season because it contains impurities like magnesium chloride and calcium chloride which are deliquescent. Sodium chloride is not deliquescent.

(c) The cold drink bottles contain carbon dioxide and are bottled under high pressure i.e. they contain a large amount of gas dissolved in them and on opening a bottle we hear a fizz sound, this is because of the solubility of CO2 gas in it and pressure in it.

Give balanced chemical equations for the reaction of water with
(a) Sodium (b) Iron
(c) Carbon dioxide (d) Sodium oxide
Answer: 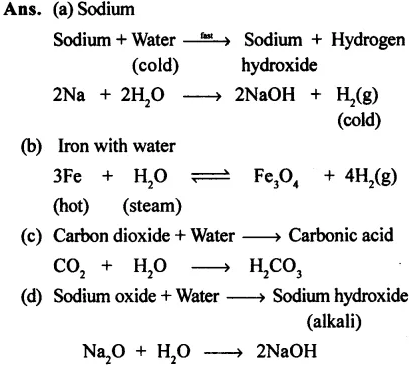 Name the gas produced when
(a) steam is passed over hot coke.
(b) chlorine is dissolved in water and exposed to sunlight
(c) a piece of calcium is added to water.
(d) when fossil fuel is burnt,
Answer:
(a) Water gas
(b) Oxygen
(c) Hydrogen
(d) Carbon dioxide

Define:
(a) Soft water
(b) Hard water
Answer:
(a) Soft water: The water present in different natural sources has different substances dissolved in it. The water drawn from certain sources forms a lather with soap rather easily. Such water is called soft water.
(b) Hard water: Water obtained from various sources does not easily form a lather with soap, rather it forms a white sticky scum or a precipitate. This water is called hard water.

(a) Name the compounds responsible for

of water. When temporary hard water is boiled, the bicarbonates of calcium and magnesium break up to form their insoluble carbonates.
These can be filtered out so that water becomes soft

(ii) Removal of hardness of permanent hardness of water—
By Adding sodium carbonate (washing soda)
Permanent hardness of water is removed when water is treated with a small quantity of sodium carbonate.
It reacts with the soluble chlorides and sulphates of calcium and magnesium to form their insoluble carbonates. These can be removed by filtration and then the water becomes soft. Sodium sulphate or sodium chloride formed after the reaction does not affect the soap.

Give reasons:
(a) Alcohol is mixed with water and is used in car radiators.
(b) Icebergs float on ocean water.
(c) Carbonated drinks are bottled under high pressure.
Answer:

(a) Alcohol is mixed with the water used in car radiators to prevent it from freezing ki cold weather. Because it lowers the freezing point of water.
(b) Ice bergs float in ocean water because density of ice is less than water.
(c) Carbonated drinks are bottled under high pressure because the solubility of carbon dioxide increases with pressure.

2. Match the statements in column A with that in column B. 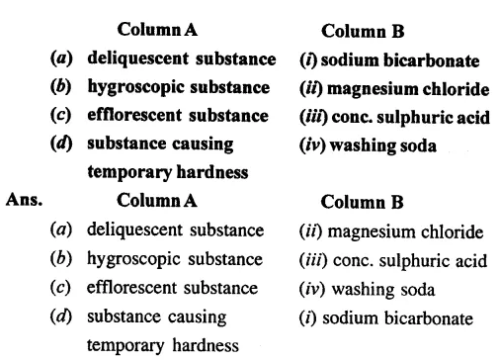 3. Give one word/words for the following statements:

(a) Water fit for human consumption potable water.
(b) The harmful substances dissolved in water impurities.
(c) The change of states of water from one form to another water cycle.
(d) The gaseous form of water found in air – water vapours.
(e) A mixture of common salt and ice – freezing mixture.
(f) A substance which does not contain water anhydrous substances.
(g) A property due to which a substance absorbs water without dissolving hygroscopic.
(h) Water molecules in loose chemical combination with other substances water of crystallization.

2. Temporary hardness of water can be removed by
(a) filtering
(b) boiling
(c) loading

(d) none of the above

3.  The ultimate source of all water on the earth is
(a) oceans and seas
(b) spring and wells
(c) rivers and lakes
(d) rain