(a) A coolie does no work against the force of gravity while carrying a luggage on a road.
Answer. True.

(c) The energy of a flying kite is kinetic energy.
Answer. True.

(d) Work done by a boy depends on the time in which he does work.
Answer. False.

(e) Power spent by a body depends on the time for which it does work.
Answer. True.

(b) No work is done by a force if the body

Answer:
does not move

(c) Two coolies A and B do some work in time 1 minute and 2 minute respectively. The power spent is

Answer:
is more by coolie A than by B

(d) The expression of power P is

(f) When a boy doubles his speed, his kinetic energy becomes

(g) A boy lifts a luggage from height 2 m to 4 m. The potential energy will become

WORK “When a force is applied on a body and there is displacement of the body, work is said to be done.”

When does a force perform work?

Work is said to be done only when the force applied on a body makes the body move (i.e. if there is some displacement or motion occurred due that force).

State two conditions when no work is done by a force.

In which of the following cases is work being done :
(a) A boy pushing a rock
(b) A boy climbing up the stairs
(c) A coolie standing with a box in his head
(d) A girl moving on the road.

work being done in the following cases

(b) A boy climbing up the stairs
(d) A girl moving on the road.

A coolie is moving on a road with a luggage on his head. Does he perform work against the force of gravity? Give reason for your answer.

No there is no work done against the force of gravity because the displacement and the direction of force are at an angle of 90°.

Walking involves doing the same amount of work against gravity as standing because the weight of the body is the same.

So, the coolie does work against gravity equal to the total weight he is carrying (his body weight and the weight of whatever he is wearing, carrying, etc).

The moon is revolving around the earth in a circular path. How much work is done by the moon?

Write the expression for work done by a force.

State the S.I. unit of work and define it.

S.I. unit of work is Joule
Joule “Is that much work done when a force of 1 N displaces the body through a distance of l m in the direction of the force.”

State two factors on which the work done on a body depends.

Two factors are :
(i) Magnitude of force applied (F).
(ii) Distance moved by the body in the direction of force (d) or (5)

State the S.I. unit of energy.

1 Joule is the amount of work done by a force of 1 Newton on an object that displaces it through a distance of 1 meter in the direction of the applied force.

How is work related to energy?

RELATION BETWEEN WORK AND ENERGY: “Energy is the capacity of doing work” Every form of energy → is work.
i.e. work done on the body is stored in the form of energy. Energy is spent when a body does work. Thus to do more amount of work-more energy is needed.

What are the two kinds of mechanical energy?

What is potential energy? State its unit.

POTENTIAL ENERGY: (P.E. or U)
“The energy possessed by a body due to its position above the ground. or change in state.”
UNIT: Unit of P.E. = S.I. UNIT OF ENERGY = Joule (J)

Give one example of a body that has potential energy, in each of the following:
(i) due to its position,
(ii) due to its state.

(ii) Potential energy of a body in the raised (or lifted) position depends on two factors:

State two factors on which the potential energy of a body at a certain height above the ground depends.

So, two factors on which P.E. depends:

(ii) Height above the ground

Two bodies A and B of masses 10 kg and 20 kg respectively are at the same height above the ground. Which of the two has greater potential energy?

Height of body A and B is same and g is constant, hence the body with greater mass i.e. Body B has greater potential energy.

A bucket full of water is on the first floor of your house and another identical bucket with same quantity of water is kept on the second floor. Which of the two has greater potential energy?

Write the expression for gravitational potential energy explaining the meaning of the symbols used.

g is acceleration due to gravity

mg is the force acting on body

h is the distance or height moved above the ground level.

A body of mass m is moved from ground to a height h. If force of gravity on mass of 1 kg is g newton,

(a) find the force needed to lift the body.

(b) find the work done in lifting the body

(c) find the potential energy stored in the body.

(a) When a body of mass m at A on ground is raised above ground through height h at B, force is applied.

State two factors on which the kinetic energy of a moving body depends.

The energy possessed by a body by virtue of its motion is defined as kinetic energy. The factors on which it depends are
(i) Mass of the body.
(ii) Velocity of the body.

Two toy-cars A and B of masses 200 g and 500 g respectively are moving with the same speed. Which of the two has greater kinetic energy? 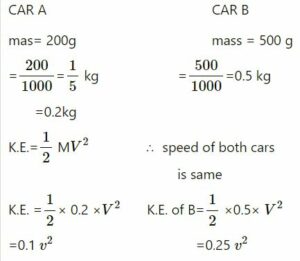 A cyclist doubles his speed. How will his kinetic energy change: increase, decrease or remain same? 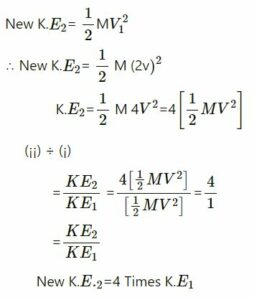 Write the expression for the kinetic energy of a body explaining the meaning of the symbols used.

Kinetic energy =1⁄2 Mv2
Where m is the mass of body v is the speed of body.

A ball of mass M is moving with a speed v. What is its kinetic energy?

Name the form of energy stored in a wound up spring of a watch.

Can a body possess energy even when it is not in motion? Explain your answer with an example.

Name the type of energy (kinetic or potential) possessed by the following:

(a) A moving cricket ball

(b) A stone at rest on the top of a building

(e) A bullet fired from a gun

(f) Water flowing in a river

Give an example to show the conversion of potential energy to kinetic energy when put in use.

State the energy changes that occur in a watch spring while it unwinds.

A wound up watch spring has potential energy stored in it, because it is wound up.

The spring unwinds itself, the potential energy changes into kinetic energy with which it moves the hands of the watch.

Give reasons for the following:

(a) No work is done if a man is pushing against a wall.

(b) Hammer drives a nail into the wood only when it is lifted up and then struck.

(c) A horse and a dog are running with the same speed. Which one of them has more kinetic energy than the other.

(d) A teacher moving around in the class is doing work but a child standing and reading a book is not doing any work.

(a) A wall does not move when pushed, hence the object is not moving. No work is done.

(b) When a hammer is lifted, the potential energy stored in it is used in driving the nail into the wood.

(d) A child reading a book while standing is not moving from its place i.e. displacement is zero. Hence, no work is done by the child.

State the energy changes in the following while in use:

(a) An electric bulb

(b) An electric oven

(a) Electrical energy to light energy

(b) Electrical energy to heat energy

A force of 30 N acts on a body and moves it through a distance of 5 m in the direction of force. Calculate the work done by the force.

Find the gravitational potential energy of 2.5 kg mass kept at a height of 15 m above the ground. The force of gravity on mass 1 kg is 10 N.

The potential energy of a body of mass 0.5 kg increases by 100 J when it is taken to the top of a tower from ground. If force of gravity on 1 kg is 10 N, what is the height of the tower? Two identical cars mean, they have equal mass
K.E = 1/2 mv2
Let m be the mass of each car 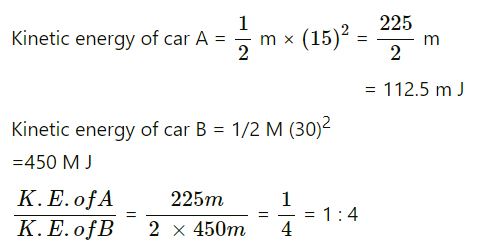 A pump raises water by spending 4×105J of energy in 10s. Find the power of the pump.

It takes 20 s for a girl A to climb up the stairs while girl B takes 15 s for the same job.

(a) Compare the work done.

(b) Compare the power spent by then.

(a) As height is same for both girls A and B, work done is same