(b) Deficiency of calcium causes

Poor growth of teeth and gums

PQ. Cataract is a disease of:

(e) Which one of the following is a genetic disease?
(i) Scurvy
(ii) Leukemia
(lii) Goitre
(iv) Haemophilia

(f) Which one of the following is a degenerative disease?
(i) Thalassemia
(ii) Ben-ben
(iii) Cataract
(iv) Diabetes

(g) Pellagra is one disease caused by the deficiency of:

(i) Which one of the following mineral deficiency diseases can be cured by eating a diet which include green leafy vegetables, banana, cereals, egg-yolk?
(i) Goitre
(ii) Anaemia
(iii) Brittle bones
(iv) Pain in muscle contraction

(k) Which one of the following is a communicable disease?

What is a non-communicable disease ?
Answer:
The diseases which are caused due to improper functioning of the body organs e.g. diabetes, heart attack. They are not caused by germs and not transmitted from one to another.

What is a deficiency disease
Answer:
These disease are caused by lack of nutrients, vitamins, minerals as a anaemia, goitre.

Biting nails should be strictly avoided. Give reason.
Answer:
Nail biting may cause many disease as the dirt has many
bacteria causing diseases. Nails should be cut from time to time to save from diseases.

Children eating more of fast food tend to suffer from obesity (overweight). Comment.
Answer:
Fast food like pizza, burger, patty, oily foods etc. have much carbohydrates and fats. Children eating these become more and more fat and gain weight soon as they do not do much of physical work.

2. Name the following (Health and Hygiene )

Disease is a departure from normal health due to structural or functional disorder of the body. These may be due to deficiency of nutrients or malfunctioning of organs or genetic disorders, improper metabolic activity, or allergies, or cancer and mental illness as diabetes, haemophilia, leukemia, schizophrenia.

It means, we make the body immune to certain diseases by introducing respective weakened germs into the body. Thus we develop resistance to the concerned disease this process is called immunisation. The germs or the material introduced into the body to make it resistant to the concerned disease is called vaccine. This produces antibodies in the body of the person and the person can be saved by these antibodies. The vaccine can be given by the injection or orally as polio drops, tap vaccine for typhoid, BCG vaccine for tuberculosis.

The germs that cause diseases to human beings and to other animals and plants are called pathogens. They spread the diseases from person to person or through the air or through the articles of the diseased persons. Pathogens may be different kinds of bacteria, viruses, fungi, protozoans or worms.

Allergy: Allergy is an unpredictable reaction to a particular substance. This type of substance is called allergen. Different people are allergic to different substances. A few common allergens are dust, spores, pollen, certain clothes, particular cosmetics, etc. The common areas of the body parts which are affected by allergies are skin, respiratory and digestive tracts. Asthma, eczema, diarrhoea, vomiting, nausea, etc. are some of the common allergic reactions.

It is a viral disease caused by the virus called HTV (Human immuno deficiency virus) This virus makes the defence mechanism of the human body veiy weak. The immune system in the body as W.B.C. becomes weak. Thus the person catches the infectious diseases very easily. This disease spreads through sexual contact as one of the partner may be carrier of the disease. It may spread through the blood transfusion and infected syringes, blades of the barbers, it may infect the developing baby through the blood by the mother. It is very deadly disease.

4. Fill in the blanks by selecting suitable words given below: (clotting, goitre, insuline, rickets, iron, proteins)

Anaemia is caused due to the deficiency of iron

3. Deficiency of iodine in the diet may cause………….

Deficiency of iodine in the diet may cause goitre.

4. Kwashiorkor is caused due to the deficiency of …….

Kwashiorkor is caused due to the deficiency of proteins

5 .Diabetes is caused due to undersecretion of ………..

6 Hemophilia is a disease caused due to slow ………. of the blood .

Hemophilia is a disease caused due to slow clotting of the blood .

5. Find the odd one out: (Health and Hygiene)

6. Fill in the blank in the following table: 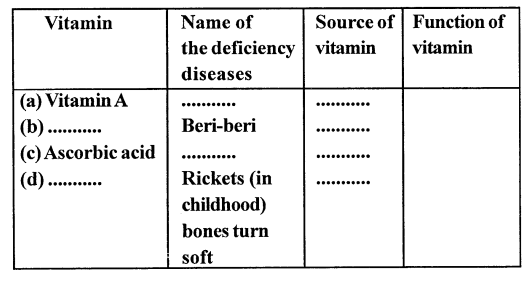 7. Given below is a crossword puzzle. Read the clues across and clues down, and fill up the blank squares. Check up your performance with the correct solution given at the end.

1. Category of pathogen that causes diseases, like common cold and mumps.
5. This is the vaccine for preventing tuberculosis.
6. An organ usually affected by tuberculosis.
7. Jumbled spelling of one of the most common insect which visits our exposed foods and contaminates them.
8. Cover this part of your body by a handkerchief while sneezing to prevent droplet infection to others.
9. These may readily grow in your hair, if you do not wash it regularly.
10. A disease that weakens body’s defence system against infections. The healthy persons may be infected by using the articles like towel, hankey, utensils, bedding used by the patient infected by the communicable diseases. Diseases like tuberculosis, ring worm, common cold, influenza are transmitted by this method.

Organisms like mosquitoes and house flies, ticks carry germs from the source of infection and pass on the germs to the normal persons and thus they are infected by diseases like malaria, cholera, plague. These organisms which cany the disease are called vectors and are not infected themselves.Mosquitoes suck blood and carry the disease causing protozoans from infected persons to healthy persons. Similarly houseflies carry the germs from garbage and sewage to the food. If this food is taken by the persons they become prey to typhoid and other diseases.

One sneeze from a person infected by cold may give billions of germs which are carried by air and may infect the healthy person. Tuberculosis passes from one person to other by coughing or sneezing of the infected person.These germs remain suspended in the air and persons may be infected by these spores or germs. Common cold, measles, diptheria, chicken pox.

cine’s are prepared, giving the name of one disease for which each type of vaccine is used.
Answer:
For developing resistance in the body we introduce germs or germ substances in the body to develop resistance in the body against a particular disease. The material introduced into the body is called vaccine, this practice is called prophylaxis. The germ or the germ substance is put into the body orally as polio drops or it is introduced by injection as TAB vaccine. Vaccine or vaccination was attached with small pox, but it is now used in a general sense.

The living germs are treated in such a way that they become very weak and as such, they cannot cause the disease. They can induce antibody formation such as the vaccine for measles and the freezed dried BCG vaccine for tuberculosis.

These virulent germs in small doses are introduced into the body as vaccine and these produce antibodies in the body and these do not allow the germs of particular type to cause that disease. In this vaccination the person is inoculated with cowpox virus. It is very similar to small pox virus.

Toxoids are prepared from the extracts of toxins secreted by bacteria. These toxins are poisons and these are made harmless by adding formalin into them. They retain their capacity and as a result when introduced into the body they produce antibodies into the body and do not allow the germs to grow in the body as vaccines for diphtheria and tetanus.

— : end of Health and Hygiene Solutions :–